Rachel began her swimming career at the age of 8. She swam for local club swim teams such as Margate Sharks, Mays Landing Mantas and Vineland Seals. She was a 4-year varsity swimmer, soccer and track and field member at Oakcrest High School. Rachel now attends Stockton University, where she played for the women's soccer and track team for four years. She received her B.S. degree in Biology and is furthering her degree at Stockton to become a Doctor of Physical Therapy.

Swimming career began at age 8 with the Countryside Swim Club, Laurelwood Swim Team and then the  YMCA of Pottstown, Pa.  which led to Assit Coaching by Age 20.

Both his children swam competitively and his son Nick is still swimming USA Events while coaching on the SJ Mariners.

His Goal is to have South Jersey area swimmers experience all the great coaches & pool's we have which will act as a tool to make the best of their swimming career in unity. 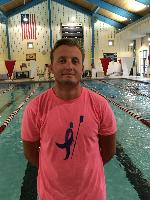 Mitch swam competitively with a variety of local swim teams since he was 5 years old, including the Mays Landing Mantas, EHT Seahawks, and Atlantic City Aquatic Club. He was a 4 year varsity swimmer and diver for Oakcrest High School and also recieved multiple varsity letters in soccer, lacrosse, and crew. Mitch also swam for Rowan University Swimming and Diving and recieved a B.S degree in chemistry. He is currently at Stockton University working towards a high school chemistry teaching certification. In the summer, Mitch will be going into his 10th season with the Ventor City Beach Patrol. 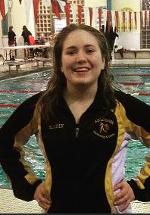 Karly began her swimming career with the EHT Seahawks at the age of 9 and joined The Mariners in 2009 at the beginning of her highschool career. She graduated Absegami Highschool in 2013 with four years of varsity swimming under her belt including two years as a team captain. She is currently in her third year at Rowan University as a Secondary Education -English major and also pursuing an additonal certification in Special Education. Karly is also the president of the Rowan University Swim Club. During the summer she is a lifegaurd at Lake Lenape.

Coach Chris has retired as a coach for the Mantas/Mariners & will be coaching our new little swimmer this summer season 2019.