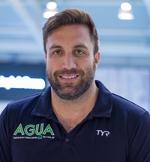 Originally from Miami, Florida, David Rodriguez has been in coaching since 2005 and joined the Asphalt Green Unified Aquatics (AGUA) Swim Team staff in 2012. His coaching philosophy focuses on long-term development and embracing the learning process. From a young age, our athletes build a strong technical foundation that allows them to grow with our program.

Since taking over as the Head Coach of the program and working as the Senior Director of Aquatics for Asphalt Green, Rodriguez’s athletes have broken countless barriers for AGUA. Notably, Rodriguez helped coach two athletes to the 2019 World Junior Championships in Budapest, Hungary. While representing the United States of America, one swimmer earned a silver medal and top-25 World Ranking in the 400 IM. The second swimmer - a five-year member of the Barbados National Team – competed in four events at the Championships.

Rodriguez’s group has also attained multiple top-eight finishes at the Junior National level from both men and women, including one Junior National Champion in 2019. Five of these swimmers achieved 18 and under World Top 100 rankings in 2018 and 2019 and three athletes have already qualified for the U.S. Olympic Trials in 2020.

Out of the pool, more than twenty of Rodriguez’s swimmers have achieved Scholastic All-America honors for their work in the classroom. He was also named Head Coach of USA Swimming’s 2019 National Diversity Select Camp as well as Metropolitan Swimming Senior Coach of the Year in 2018 and 2019.  Rodriguez is an ASCA Level 5 Coach and has helped AGUA to USA Swimming Silver Medal Club Excellence status three years in a row.

As an athlete, David swam for University of Nevada, Las Vegas, where he helped bring home the first conference championship in the school’s history.

John Fedena joined Asphalt Green in 2017 after serving as head coach of the YMCA of Northwest North Carolina. He spent the five years prior as a division lead coach with SwimMAC Carolina, a club that has produced multiple Olympians. There, his age group broke national records and earned a junior national team championship in 2012.

John has served on the North Carolina Local Swimming Community Board of Directors and the USA Swimming Southern Zone Board as age group chair. He was nominated as a finalist for 2016 Age Group Coach of the Year by the American Swimming Coaches Association and North Carolina Swimming. 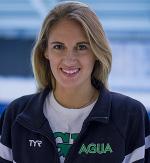 Originally from Brookfield Connecticut, Heather swam for the Savannah College of Art and Design from 2009-2013. She came into college holding multiple high school state records in the 100 butterfly and medley and freestyle relays. In college, she transitioned to distance freestyle. Throughout her time as a student-athlete and captain of the team, she won two National Association of Intercollegiate Athletics (NAIA) national titles in the 1,650 freestyle and earned three NAIA All-American honors.

Heather specializes in coaching the 100 butterfly, medley and freestyle relays, and distance freestyle but also enjoys coaching all strokes. She has developed swimmers of all ages and is excited to prepare athletes, both physically and mentally, to compete on the AGUA swim team 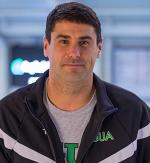 Matt joins the AGUA swim team with experience in all levels of age group coaching. After serving as head coach for two small teams, he comes to Manhattan from the Wilton Wahoos in Connecticut. With Wilton, Matt held positions on CT Swimming Senior and Age Group committees and was the primary coach for the 13-14 age group. Under his supervision, the Wilton Wahoos 13-14 swimmers won the CT state championship title three times in the past two years.

Originally from North Carolina, Matt found the sport of swimming at an early age and his love of the sport carried him to the Bolles School in Jacksonville, Florida. While at Bolles, Matt was a five-time Junior National Champion and qualified for Olympic Trials in three events.  He swam at the University of Tennessee, Knoxville where he set the team record in the 400 IM, became an SEC Champion in the 500 free and earned multiple NCAA Division I All-America honors.

Matt loves coaching and teaching the lessons swimming has to offer.  He believes that a swimmer’s truest potential can be reached only with a strong technical foundation. He believes in and values making the learning process fun for both the swimmers and coaches!

Hailey Hewitt grew up swimming in Fairfax, Va., where she was a junior national qualifier for the Nation’s Capital Swim Club. She continued her career as a student athlete at the College of William and Mary, an NCAA Division 1 school. Hailey served as co-captain of the Tribe team, and in her senior year, she became the first swimmer in school history to qualify for the US Olympic Trials in the 200-meter backstroke. The two-time Colonial Athletic Association (CAA) champion was named Tribe Club’s Woman Senior Athlete of the Year.

After graduating in 2012 with degrees in kinesiology and elementary education, Hailey began her coaching career volunteering with the College of William and Mary swim team. In 2013, she moved on to become the assistant swim coach at Western Albermarle High School and spent two years as the assistant director of competitive swimming for the Shenandoah Marlins Aquatic Club.

Since arriving in New York in 2015, Hailey has utilized her coaching talents as the lead instructor at Swim-City, a learn-to-swim company based in Manhattan. During her time there, she has coached over 100 swimmers in residential buildings around the city.

Diana Pimer grew up in West Haven, Conn., where she set five school records for West Haven High School and four team records for the Hopkins Mariner Swim Team. As a student athlete at Keene State College, Diana was a four-time school record holder and captained the swimming and diving teams. In her senior year, Keene State College named Diana the Strength and Conditioning Athlete of the Year and the College Female Athlete of the Year.

Diana graduated in 2015 with a bachelor of science in exercise science and a specialization in coaching. She remained at Keene State College as an assistant coach, fostering one US Olympic Trials qualifier and 10 All-American performances.

She moved on to coach for Greenwood Swimming, where her accomplishments include leading one athlete to a bronze medal at 2016 Rio Paralympic Games. She has also coached USA Swimming national top 10 athletes, National Zone Select Camp qualifiers, and New England age group champions and record holders

Art has diverse experience training clients of all ages and abilities, specializing in sports performance. An avid athlete, his passion for sports led him to pursue a career in personal training. He is a certified strength and condition specialist, USA Track and Field Level 1 coach, certified functional movement screening specialist, and holds a Bachelor of Science in nutrition and exercise science from Queens College.

Art’s training approach is to identify the specific needs of each swimmer and safely progress through a strength and conditioning program. He addresses an individual’s asymmetries to create a fitness regimen that will improve health and physical performance.

Ian was introduced to weight training at the young age of thirteen, when he spent the summer with Olympic strength coach Charles Staley.  Initially teaching himself by reading fitness magazines and books, Ian has since pursued a formal education through course work at The University of Albany, Borough of Manhattan Community College, and the National Academy of Sports Medicine.

With over 10 years experience as a coach and a trainer, Ian has worked with athletes at every different level.  In addition to holding numerous personal training and strength certifications Ian is also a Lifeguard and CPR instructor with the American Red Cross, and is a New York City EMT-Paramedic.

Ian fully understands the pressures and demands placed young athletes. Growing up he competed in sports all year round playing football, wrestling and running track.  At the University of Albany Ian rowed crew and was the captain of their wrestling team.  Currently Ian plays rugby for the New York Rugby Club, competing in Division 1, the highest level of completion in the US.


Ian believes that through a proper dry land and strength training program any swimmer can benefit.  He thinks that safety and proper form are paramount over everything else.  Heavy single weight training, maximum lifts, and hypertrophy work is discouraged and instead there is a large focus on core strength, mobility and flexibility.

Brad Green recently came to AGUA after coaching at his alma mater UMBC.  He worked specifically with the distance group as well as the Senior Yellow group of the Retriever Aquatic Club. Besides his duties on deck, Brad also managed the learn to swim program and assisted with pool management and the RAC swim camp.
Prior to his stint in Baltimore, Brad served as the head coach of the Ocean City High School team leading them to their first girl’s conference championship and numerous state qualifiers.  He also worked with the Ocean City C-Cerpants as their Head Senior Age Group coach.
After graduating from UMBC with a degree in Economics, Brad returned to his native Philadelphia to attend West Chester University, where he earned a teaching certificate in physical education and health.  While there, he also coached swimming and water polo at Episcopal Academy.
Brad formerly held the UMBC record in the 100-yard freestyle and was named America East and ECAC Outstanding Male Swimmer in 2004, as well as the UMBC Outstanding Male Senior Athlete. Most recently he was inducted in the UMBC Athletic Hall of Fame in 2012.
Brad hopes to use his experiences and knowledge to relate to the athletes on a personal level as well as guide them in their development as swimmers and young adults.  One of the things Brad hopes to instill in his swimmers is that bringing a positive attitude each day to the pool is an absolute must as the mental side of the sport is just as important as the physical side.  He firmly believes that positive thoughts lead to positive results.