Adam comes to join forces with his brother to be the Co-Head Coach of OLY. He spent 23 years with the Flint YMCA Falcons as their head coach. While under the leadership of Cooper the Falcons won 2 YMCA state titles and 2 YMCA zone titles. Their YMCA national team placed in the top 10 multiple times and he coached over 100 different All-Americans. Adam brings a lot of experience to OLY at all levels of the sport. While coaching in the YMCA league Cooper was a member of the Great Lakes Zone Commitee and  also held a position on the YMCA National Advisory Board. In 2014-2015 Adam was named to the USA National Team coaching staff. Cooper was also selected as a member of the 2013 18 & Under USA World Championship coaching staff that competed in Dubai, UAE. Cooper worked with world class athlete Courtney Weaver who was junior national champion in 2011 and was 9th at Olympic Trials in 2012. She won 12 YMCA national titles and at one point held 5 YMCA national records and 8 Michigan state records. She was named to the USA National Team in the summer of 2014. At that time Courtney was ranked 17th in the world and 4th in the United States in the 200M Butterfly.

Cooper received a degree from Oakland University in 1994 and swam for the Pioneers from 1989-1991. Adam lives in Grand Blanc with his wife Angie(who also swam at OU) and their 3 boys Garren, Connor and Owen who all swim with the program. 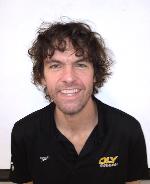 James (Jimmy) Ohngren is the Head Age Group Coach of OLY Swimming and oversees all age group activities at Oakland University and Avondale and Clarkston High Schools. Coach Jimmy is responsible for the coordination of staff and implementing the philosophy of OLY within the Age group structure of OLY Swimming. Jimmy has been part of The OLY Program for the better part of two decades. He began as an athlete in the nineties. Jimmy was a Junior National level distance swimmer and a member of the 1998 OLY Men’s team the captured the men’s team title at USA Junior Nationals in Buffalo, New York. After finishing as a swimmer at MSU, Coach Jimmy served as head age-group coach of Royal Swim Team in Culver City, CA. After returning to Michigan, coach Jimmy then returned to OLY as an assistant coach with the age group program and has been with us since. He is beyond excited to put his 10 years of USA coaching experience to work as OLY’s head age group coach. When not coaching at OLY, Jimmy is the head coach of Bloomfield Hills SURF Club.

Coach John is passionate about competitive swimming! With over 20 years of coaching to his credit he has had the opportunity to successfully develop many of the area’s swimmers at all levels and ages. He has earned a reputation as being an insightful and motivating leader who is able to bring out the best in his athletes by cultivating a culture of enthusiasm for the sport of swimming and for the team.

John began swimming competitively at age 5. His swimming career carried him through Age Group, High School and on to Oakland University. As a swimmer he is known as an “all around swimmer.” Training and competing in all four strokes and individual medley events. Along the way he managed to set several records, achieved national rankings and has been able to compete and be coached at almost every level of the sport. Since college John has trained and competed as a Masters Swimmer.

John began coaching for local club and YMCA teams as well as giving private lessons. He spent 14 years as a coach for the Huron Valley Penguins Swim Team and the past 4 years with OLY swimming.

Christopher "Topher" Westgate returns to OLY after a 16 year career in the sport. Of those 16 years, Chris swam 9 with OLY. After OLY, he went on to swim at Wayne State University, earning a spot on the Warriors GLIAC scoring roster all four years in distance freestyle, the 400IM, and the 200 butterfly. As a firm believer in the "program", Chris aims to build on OLY's already impressive record. As Chris says, "I hope to encourage OLY's athletes to be hard working both in and out of the water!" In his free time, Chris still swims Masters and is an avid Equestrian. In Chris' own words, "I'm thrilled to return to my roots where I was an OLY swimmer and now in a new role, I hope to help guide future generations to success at OLY!"