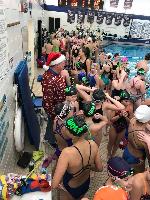 Lana started swimming at the age of 10 1/2 for the Bloomington Aquatic Club. She started on the novice team and quickly moved up the ladder to the A team in less than a year. Her first Champ times were in the 50 free and the mile. Coach Dave came along when she was 13 and made her swim miles upon miles upon miles. She had mostly Zone times throughout her age group experience and was ranked top 16 in the nation in her distant events.

Lana qualified for the State Meet all 3 years swimming for Burnsville High School back in 1981-1984. She placed in the top 8 in each event and swam the butterfly leg, her junior year, on the 200 Medley Relay with her sister, Lisa, breaking the record for a championship win. Lana also achieved All American Status. Her swimming career continued at Saint Catherine's for one year, and a season at Oral Roberts University. She began teaching private swimming lessons at the age of 21, worked for Flagship Athletic Club in Eden Prairie, Council Oaks Learning Center in Oklahoma and LifeTime Fitness in Champlin and Fridley. She also assisted the Bloomington Aquatic Club, Northern Lights Aquatics and the Maple Grove Muskies.

Lana coached the Pups and Trackers from 2004-2008 and returned in 2015 after her kids graduated from High School. She is a wife, mom of five adult children, grandma and a group fitness instructor/personal trainer for the past 31 years. She loves working with the Hunters and says, "It's bitter sweet when I have to let my swimmers move to the Alpha Leaders group because I feel like they're my own!" 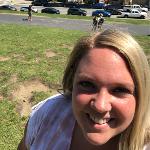 My swimming career started in my backyard pool to joining Great Wolf when I was 7 years old! I swam with WOLF for a few years before I took a break to try other sports. From here, I joined the high school swim team at Andover High School in 7th grade and swam with them until my Senior year. I had the privilige of being a team captain and the opportunity to help lead and guide the younger/newer and show them how fun the sport of swimming is! I also swam with Great Wolf during the off season.
Throughout my swimming career, I mostly swam distance events, including the 200 and 500 freestyle at high school meets.(I was never much of a sprinter!). During the off season with Great Wolf, I swam a lot of backstroke as well as the 500 and 1650 Free! Distance events will always be my favorite thing to swim...weird, I know!
After high school, I made the difficult decision to quit swimming due to shoulder issues and attended the University of North Dakota. I graduated with a Bachelor's degree in Psychology, with a minor in Criminal Justice and Spanish. I came back to Minnesota to start a new job and a few months later, started coaching with Great Wolf!

Matt has been involved in swimming as an athlete since he started swimming at age 6.  He swam for Jet Stream Aquatic Racing, NHCP Swim Club and Edina Swim Club through his career.  During his club swimming career, he was a multiple time state champion, state high point winner, NCSA junior national qualifier, Winter national qualifier and an US open medalist.
Matt also had a successful high school swimming career for Anoka high school.  During his high school swimming career, he qualified for the state meet all 6 years, was All-State his final 4 years and elected captain during his senior year.  He still holds school records in the 200 IM, 500 Freestyle, 200 Freestyle Relay and 400 Freestyle Relay.
After high school, Matt attended Denison University.  While at Denison, he was a member of 3 national championship teams and was a 9-time All-American.  Matt graduated from Denison University in May 2019, majoring in Health, Exercise and Sport Studies and minoring in Psychology. He looks forward to using his experience in sport to educate his swimmers and help them achieve their goals.

This will be Jason’s 11th year coaching club and High School swimming. As a swimmer, he found national level success where he swam Backstroke, Breaststroke and IM events. Some of his highlights include winning USA Junior Nationals in the 200 backstroke, placing top 16 at US Nationals in both backstroke events, selected to multiple US Olympic Developmental Camps at Colorado Springs, 4-time Oregon High School state record holder in the 100 back, as well as back to back state champion in both 100 Back and 100 Breast in his Junior and Senior years (the first in the country to complete this combo). Jason swam for the University of Florida and then later transferred to the University of Minnesota where he graduated with a BS in Sport Management. He has been trained and mentored by some of the world’s best swim coaches.

Some of Jason’s coaching highlights include:

Jason’s coaching philosophy is based on providing meaningful experiences to his athletes while enhancing their skills and values in life through sports. He emphasizes kicking, technique and IM training which allows individuals to develop into well rounded athletes. He believes that in order for an athlete to realize their full potential, they must master both the mental and physical sides of the sport. We're glad he's part of our team! Go WOLF!

Amy started swimming competitive at age 10 for the Saint Paul Swim Club.  Prior to joining the team, she had never swum a lap or even passed beginner level swimming lessons.  After an interesting first year, she began to master the four strokes.  As her swimming progressed she became a nationally ranked swimmer in multiple events, won many age group titles and broke several state records.  As a club swimmer she qualified for junior nationals, senior nationals and went to the Olympic trials in 1984 in Indianapolis Indiana.

Amy’s high school career began in eight grade when she joined Johnson High School’s swim team and went to state in the 50 freestyle placing 2nd in finals.  From 9th grade through 12th she won the 100 butterfly state titles and held the state record for over a decade.   Overall, she achieved 5 first place finishes, 4 second place finishes and was a high school All-American.

After graduating high school Amy attended Arizona State University on a swimming scholarship.  There she specialized in the 100 and 200 butterfly and freestyle sprints.  While at ASU she qualified for NCAA’s in both individual events and relays.

In January 2013, her daughter joined the Great Wolf Swim Team and Amy eventually made her way onto the pool deck to coach.  She is excited about the energy the age group swimmers have and is thrilled to be working alongside some of the best coaches in USA swimming.