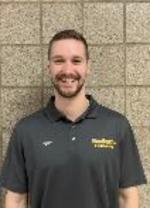 Coach Zach swam competitively for 8 years in Farmington, Minnesota. He swam varsity for 6 years on the high school team where he won a conference championship and qualified for the state meet on multiple relays.

Zach spent two years as an assistant coach for the YMCA Gator Swim Club while attending St. Cloud State University. He graduated with a Bachelor’s degree in Health and Physical Education in 2016 when he started working as a lead coach for the Sea Devils.

After a year of teaching in Northern Minnesota, Zach moved back to the cities after getting married in the summer of 2018.

Terri swam competitively for 10 years (ages 7-17) for the Beaver Dam Swim Team in her hometown of Beaver Dam, Wisconsin . She qualified for State Championships in the Breaststroke all 10 years. Terri has a Bachelor’s Degree in Nutritional Research and Biochemistry from the University of Wisconsin-Madison, where she did research for 2 years.  Terri and her husband Mark live in St. Michael with their son, Grant.

Cory swam for the Cambridge-Isanti High School team, and was honored to serve as the team's captain for two seasons.  He was able to swim breaststroke at the state meet several years.  After graduating, he enjoyed coaching the team alongside his own former coach, and especially enjoyed coaching his former teammates.

After high school, Corey swam for Wolf, Jetstream and finally found a home with the Sea Devils first as a swimmer and finally as a coach.  When not>

Corey is currently attending Anoka Ramsey Community College and intends to continue his education at a Minnesota state university.

Dave swam competitively for Maple Grove /Champlin from age 9- 18. In high school he qualified for State in the 100 Fly his Sophomore and Senior years. He was voted MVP his Junior Season and served as a Captain his Senior Year. Dave swam the 200 Fly and the 1650 Free for the University of Wisconsin- Milwaukee.  He earned the Coaches Award during his Freshman Year and enjoyed competing in some of the finest pools in the country. From 1999 to 2004, Dave started coaching along side his childhood coach at MGC. While there, he had the opportunity to work with several State Champions in the 8 & U and 9-10 age groups.  Dave joined the Sea Devils in 2009 and has lived in St. Michael since 2004 with his wife, Christine, daughter Emma, and son Aiden.

DaNae grew up in Elk River, swimming competitively since the age of 12 and joining the High School team. All Conference honors through her career and qualifying in freestyle for State Sophomore, Junior and Senior year. Junior year All State Junior year and helps holds the 400 Free Relay record. She's been coaching since 2010 and joined the Sea Devils in 2012 and loves every moment! Hoping to help kids enjoy the sport just as much as she does.

In February of 2016, after experiencing constant migraines and some moments of forgetfulness, she was diagnosed with a brain tumor. The tumor was also causing epilepsy which is all now trying to be controlled by medication.  In December 2017, she had a biopsy and found the tumor is benign- YAY! DaNae can't thank enough her family, her co-coaches, her friends, her swimmers and the parents that are more supportive than she could ever imagine!

DaNae graduated with a degree in Dental Assisting and continues to reside in Elk River, MN with her husband, Nick. They love traveling when possible and she still finds times to swim with the Sea Devils Master Program for the love of the sport!

Ruth grew up in Duluth, MN where she swam for her high school varsity swim team in 8th and 9th grades and was a member of the state relay team in 9th grade. Later in high school she focused increasingly on music and graduated from Interlochen Arts Academy in Michigan.

Ruth graduated from North Park University in Chicago, IL with a B.A. in English and a minor in music. She worked in fundraising and marketing for the arts before becoming a stay-at-home mom. Since then she has volunteered serving children, families, and women in various capacities at her church and home school co-op.

Ruth currently lives in St. Michael with her husband, Erik and home educates their three children. Two of her children swim with the Sea Devils, and she is thankful they are part of such a great club. Ruth is also a member of the Sea Devils Masters program and had a blast swimming her first lake swim in Alexandria last summer. She is thrilled to be a part of the Sea Devils coaching staff.

Suzie grew up around swimming her entire life.  With her father coaching her along the way she swam competitively for 7 years on the Cambridge- Isanti swimming team.  She enjoyed being captain of her swimming team her senior year and receiving all conferences honorable mention and academic all conference awards during her high school career.  Suzie then went to college at the University of Wisconsin- River falls where she got a B.S. in Elementary Education with a minor in Coaching.  She now currently is a 1st grade teacher at Rockford Elementary Arts Magnet school.  She coached last year for the North Suburban Aquatics program and looks forward getting back into coaching with the Sea Devils.

At age 5,  Jon  Kemp finally learned to backfloat and hasn't looked back since.  Jon  swam competitively for West High School in Waterloo, IA for four years specializing in the 200 IM, 100 Breaststroke, and the 200 Medley relay. He was a proud member of three district teams and an All-Conference Academic swimmer.

Jon earned his B.S. in Education and Social Policy from Northwestern University in Evanston, IL in 2017 and has been teaching Social Studies at STMA High School ever since. Jon is also an Assistant Coach for the STMA Boys Swim Team.