“Our deepest fear is not that we are inadequate. Our deepest fear is that we are powerful beyond measure. It is our light, not our darkness that most frightens us. We ask ourselves, who am I to be brilliant, gorgeous, talented fabulous? Actually, who are you not to be? You are a child of God. Your playing small does not serve the world. There is nothing enlightening about shrinking so that other people wont’ feel insecure around you. We are all meant to shine, as children do. We were born to make manifest the glory of God that is within us. It’s not just in some of us; it’s on everyone. And as we let our own light shine, we unconsciously give other people permission to do the same. As we are liberated from our own fear, our presence automatically liberates others.”

I believe sports and athletics are a wonderful way for all of us to stay strong in spirit, mind and body. Swimming is one of the very few athletic pursuits which allow lifelong opportunities for both fitness and competition. This, coupled with the individual pursuit of a goal, while being part of a team, separates swimming from other athletic endeavors. Often times swimming is looked at as an individual sport, but without the support of teammates, coaches, and parents, the intensity needed to improve through the years is very difficult to sustain on a daily basis.

As a coach I want to see the athletes I work with attain their goals. But a goal must be set before pursued. The choice of a goal takes time and is a delicate balance. The goal has to be important enough to the athlete to help motivate them on a daily basis, even in the face of considerable stress and distraction.

At the end of the day, athletes’ have only one person to answer to, and that is themselves. I can write a workout, I can push the swimmer, but in the end, the athlete is the only one who can answer whether he or she has pushed as hard as is possible at practice. Everyday the athlete is responsible for the effort put in.

The beauty of swimming is the concrete way the sport is measured: time. I always caution athletes and parents to not solely focus on the time. However, if an athlete is not achieving best times or at least matching their best times at points through the season there could be reasons for the pause in progress. Lack of intensity or reaching a plateau signals a need for a change in workout.

The important thing to realize is that there are many tangible benefits to being on a team. Learning to work with others, helping younger swimmers grow, and being a leader are just a few that come to mind. In the long run, sports are not very important, but the lessons one can learn from participation are. Commitment on a daily basis, hard work at practice, and supporting teammates, while they do the same, are the important things we learn from athletic pursuits.

Coach Craig assists in coaching all age group levels but spends the majority of his time coaching the senior group with Coach Tom. Coach Craig’s philosophy is based on a character first emphasis.  His hope is for all his swimmers to love the sport through hard work, commitment/dedication and teamwork.

YMCA Volunteer of the Year

My swimming career started in 1996 when I was 7 in small town Ahtubinsk, Russia. In 2004 I moved to my grandparents' house in Minsk (Belarus) because I had opportunity to enroll to Minsk state school of Olympic reserve. 2004-2007 I swam professionally for this school. We had 11 practices a week, 4000-5000 meters per practice. My favorite events were 50, 100 butterfly and 100 IM. I competed in different swim meets in Europe and Russia. In 2007 I enrolled to Belarus State Economic University and competed only at university level swim meets. Summer 2009,10,11 I spent in East Hampton as an ocean lifeguard. I graduated in 2012,got married and went to the army for 1 year. Even there I was competing at swim meets and got 4th place on 100 free over all army forces of Russia. In 2013 I moved to USA and started to work at YMCA. First as a lifeguard and after I get my WSI (2014) I became a swim instructor and then coach. 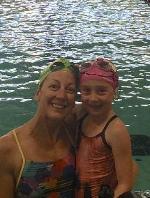 After a long hiatus from the sport of swimming, I became incolved again as a coach when my daughter started swimming in 2014.  I started swiming at the age of 7 on the Pocantico Hills Swim Team in Northern Westchester Swim League and soon after started swimming with the YWCA Middies of White Plains.  I switched to the Badger Swim Club in Larchmont at age 14 and swam at Brown University.  During summer breaks from Brown, I coached the Westwood Swim Team in the Westchester Swim Conferences from 1988 to 1991.  I then moved to California and started my teaching career, which took me to Ecuador and then back to the Metro area in 2000 to get a Masters in Education from NYU while teaching in Hastings-on-Hudson.  I have been teaching in East Hamton/Montauk since 2003.  I am currently an ASCA Level II Certified coach.