Ilan has coached swimmers to numerous successes at all age-group levels; County Champions, Metropolitan Junior Olympic Champions, Eastern Zone Champions, YWCA National Champions, New York State High School Champions, High School All-Americans, Empire State Game Gold Medalists, NAG Top 16 individual and NAG Top 10 Rankings (including several #1 rankings), Region I Finalists and Champions, Junior National Finalists and Champions, Senior National Qualifiers, Olympic Festival Participants and Olympic Trial Qualifiers. In 2004, Ilan coached his first Olympic Games Qualifier. He attended the Olympics in Athens as a member of the Philippines coaching staff.  Ilan's achievements and his reputation of success have been nationally recognized by his twice being chosen as the ASCA Metropolitan Age-Group Coach of the Year. He has achieved level 5, the highest achievement, in ASCA as both a senior and age-group coach.  United States Swimming has recognized Ilan's success and achievements by appointing him the head coach of National Zone Distance Camps and National Select Camps, and by inviting him to the Olympic Development Camps. 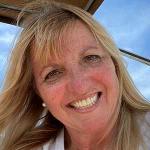 Cheryl Blenk is a certified athletic trainer and strength and conditioning specialist. She comes with over 25 years of experience and hold degrees in athletic training, as well as a masters in biology. She is pursuing her second masters in nutrition at the University of Bridgeport. Cheryl is a former club swimmer and Division 1 collegiate swimmer and presently continues to compete on the masters swimming and triathlon circuit, frequently placing in top 3 in her age group. Cheryl has been coaching with Empire for over 7 years and presently is our head dryland coach overseeing the strength training program for our Extreme team. Cheryl is also the assistant swim coach at the Ardsley pool site with head coach Ilan Noach. Cheryl has her own business working as a strength coach and nutrition coach. Additionally, Cheryl is the head swim coach for Ursuline Varsity Swim team in New Rochelle. 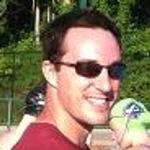 Jay works with all of our training groups, video taping swimmers in action and then reviewing and analyzing stroke mechanics with swimmers and coaches.  A former Wilton Wahoo swimmer, and Metro Swimming Zone Coach, Jay has extensive coaching experience with a focus on the age-group level. Along with being a Certified American Red Cross Instructor, Jay is also a Certified New York State Music Teacher 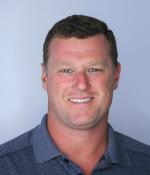 Brian, a former All-American swimmer out of White Plains High School swam USS for the White Plains YWCA Middies with Ilan, where he excelled as a distance freestyler and then went on to join the University of Florida Gators as a distance freestyler. While swimming with Ilan at Middies, Brian was a Senior National Finalist numerous times, as well as the 1994 Spring Senior Nationals Rookie of the Meet. He medaled at Junior National, US Olympic Festival, Empire State Games and attended dozens of US Swimming Select Camps and National Distance Camps throughout his career. Upon returning to the area, Brian coached at Iona Prep, Horace Greeley High School and the Larchmont Shore Club. While at Iona Prep, he led the Gaels to a Division II Title and was named Catholic High School Coach of the Year for the 2002 season. Brian went on to become the Head Coach of the Iona Gaels Swim Club, as well as assistant Coach of Iona College Men’s and Women’s teams, before becoming Head Age Group Coach at Badger Swim Club. He is currently the Aquatics Director and Head Men’s and Women’s Swim Coach at Purchase College as well as the Metropolitan Swimming SafeSport Coordinator. Brian brings a wealth of swimming knowledge and experience to our program, and we could not be happier to welcome him to the Empire family!

Coach Tony’s love for swimming began at the age of 5 and he swam competitively from then through high school for a number of US Swimming teams in Queens and Long Island.  Tony was a multiple Junior National qualifier in the 100 and 200 breaststroke and the 200 and 400 IM events.   Tony attended Fordham University where he swam Division I for the Rams all 4 years qualifying and scoring at ECAC’s and additionally played on the varsity water polo team for 2 years.   After graduating Fordham, Tony coached a US Masters swim team, as well as, the St. Mary’s Boys and St. Mary’s Girls High School teams each for 3 years, winning Coach of the Year honors.  Tony then moved to San Antonio, Texas, where he was an age group coach/IM coach with Alamo Area Aquatics Association for 5 years and was also the swimming and water polo coach for John Jay High School for 1 year.     Tony brings his diverse experience and enthusiasm to Empire and is excited to be back on the pool deck working with the Excel group. 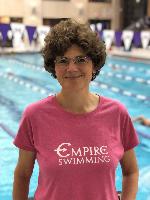 Lara is now in her 4th year of coaching the lightning group with Empire.  Coach Lara swam as an age grouper with the Gotham Aqua Kings and was a Junior National finalist in the 100 and 200 breaststroke.  Lara has a Bachelor’s degree from Brown University, where she was a member of the Women’s Varsity Swim Team for 4 years.  Lara was elected to the Brown University Athletics Hall of Fame in 2012 as part of the Women’s Swim Team from the 1984-85 season when the team won its first Eastern Seaboard Title.  In addition, Lara has a J.D. from Columbia University School of Law.

Rachel has pretty much grown up on a pool deck. She started her swimming career at 5 swimming for Rocky Ledge in the summers and at 6 she started swimming at the YWCA Middies. Rachel moved to Empire when the team started in 2007 and, while swimming for Empire, Rachel earned all-league honors at White Plains High School and taught in our Swim School. After graduation, Rachel continued her swimming career at SUNY Cortland, where she earned all-SUNYAC honors two years in a row.

Jeremy swam at White Plains High School and all four years of his college career at SUNY Maritime. He comes to us with a broad base of experience as a lifeguard, a swim instructor, an Ironman Indoor Triathlon Director, and as the head coach of a USA swim team. We are excited to have Jeremy as Lead Coach at Purchase College Pool working with Rockets, Lightning, and Xcel groups there.

Lorena began swimming at the APEX Swim Club in the Bronx at 8 years old. Swimming at Dewitt Clinton High School, she was named Most Valuable Swimmer her freshman year, and became captain in both her junior & senior years. Lorena went on to swim at Purchase College, where she earned the Most Valuable Player Award in her freshman year and was part of a record breaking relay team at the Skyline Championships in 2016, helping the Purchase women's team earn second place in their conference. Lorena was also captain of the team in both her junior and senior years at Purchase. After graduating from Purchase College in May 2018 with a degree in Theater and Performance and a degree in Arts Management, Lorena coached at the YWCA Middies swim team, and currently coordinates the swim lesson program at Purchase College as well as pursuing her interests in the Arts. We are happy Lorena is part of the Empire family this year, coaching our Xcel and Lightning teams at Purchase College with Coach Brian Hansbury.