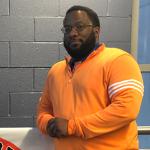 John Yearwood is entering his tth year as the Middies Head Coach. He was the 2017 & 2019 Westchester County Swim Conference Coach of the Year. Coach John also won the Metropolitan Swimming Must Watch Age Group coach of the Year in 2019
Since taking over, Middies Swimmers have qualified for and competed at Senior Zones, YWCA Nationals, Age Group Zones, Junior Olympics. The 2016-2017 saw the team's first Junior National Qualifier and Eastern Zone Champion in more than 10 years. Swimmers have consistently placed in the Metro Top 25 and ranked on the USA Swimming Top-10. The team has set 9 team records in the past 3 seasons. Under his leadership, the team took home the Westchester Fairfield Swim League Championship in 2020
He joined the Middies after serving as the Head Coach of the Sailfish Swim Team at the YMCA New Rochelle where, under his leadership, the team grew from 30 to 130 swimmers.  Prior to his tenure as Head Coach, John worked for five years as the Age-Group Coach for the Sailfish Team. He also has experience as a coach at The College of New Rochelle, The College of Mount St. Vincent, the Ethical Cultural Fieldston School and the New York Athletic Club.  John’s leadership has lead to successful regional and national team competitions.  John has produced numerous YMCA National competitors and has coached many YMCA State Champions. Coach John is a patient and enthusiastic coach. You will often find him on the pool deck carrying on as if he is one of the youngest swimmers in the pool. His approach and patience with the kids have been an integral part of his team’s growth and success in the past.
John holds certifications in Lifeguarding (ARC), CPR and First Aid (ARC), Responding to Emergencies (ARC), Water Safety Instructor (ARC), Certified Pool Operator (YMCA), YMCA Principles of Competitive Swimming and Diving (YMCA), American Swim Coaches Association LEvel 3
John has spent over 10 years as a member of the Metropolitan Board of Directors, helping provide Governance in different roles for the LSC. 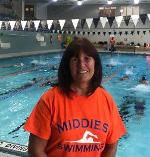 This is Dots 4th year at Middies. She came to the team with over 20 years of aquatic experience, including overseeing the Harrison Recreation Department’s aquatic programs.  Previously, she coached the Harrison winter swim team and is the Head Coach for the summer swim program in Harrison, a team she started in 2008.  Dot received the 2017 Westchester County Swim Conference Coach of the Year Award.

Besides coaching at Middies, Dot works for the Harrison Recreation Department and is an American Red Cross Instructor for CPR First Aid, AED, & RTE.

Dot is a Coaches representative for the Weschester County Swim Conference.

Coach Cosme comes to the Middies with over 20 years of aquatics experience, having taught lessons the YMCA, White Plains Parks and Rec and the Theodore D Young Community Center. On the coaching side, Coach Cosme has spent the last 6 years coaching at the Fairview Aqautics Swim Team. At FAST, Cosme worked with the Senior and Junior squads, having helped develop many Junior Olympic and Zone qualifiers. Coach Cosme was also the head coach of the White Plains Modified swim team from 2014-2015. Cosme has also coached and been acitve part of developing athletes who have competed in the Special Olympics

Outside of Aquatics, Cosme works at the Y apart of the Special Programs, providing one on one afterschool care. Cosme has a Bachelor's Degree in Recreation Leisure and Management 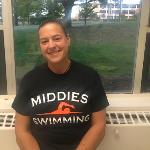 Inga made her return to the Middies in the Winter of 2015. Coach Inga has over 20yrs of experience in the aquatic realm. For the last 10 years, she's served as the Head Coach at Scarsdale Town Pool in the summer. Inga is also the Assistant Coach at Ardsley High School for the Girls and Scarsdale High Scholl for the Boys. She's also a former coach at Empire Swimming.

Outside of the pool, Inga is a  USAW Olympic weightlifting coach and former athlete. She's an American Record Holder. Inga is also a strength and conditioning coach to
professional, semi pro, amateur and high school athletes throughout the Westchester and will be taking over the dryland coaching responsibilities for the team.

We are excited to have Coach Inga back with the Middies

Laila Ouldibbat is entering her second season as a coach with the Middies.

Laila began swimming at the age of of 4 and swam competitively as a member of the New Rochelle Sailfish where she was a multiple time YMCA State Qualifier. She was former team record holder and was named team captain her senior year. As a member of the Eastchester High School swim team, she was also a team captain and former Sectional qualifier.

Laila is a 2016 Graduate from Drexel University where she was a member of their club team. She's looking forward to another year with the Middies and will primarily be working with the Bronze/Junior squads.

Outside of the Middies, Laila is a Neonatal Registered Dietitian at Westchester Medical Center.

Meghan Barry is entering her third year coaching with the Middies.

Meghan began her swimming career with the Middies when she was six years old and finished as a member of Empire.  Meghan also swam for White Plains High School, was a sectional qualifier and was the team captain in her senior year.  Meghan swam and dove collegiately at Hartwick College in Oneonta, New York where she earned her Bachelors Degree.  In college, Meghan was a distance freestyler and a  backstroker.  Meghan was named the Distinguished Athlete for Hartwick Swimming and Diving in the 2014-15 season and was presented the All Hartwick Award her senior season.

In the summer, Meghan coaches at Winged Foot Golf Club

Alexander Lessem is entering his second season as a coach with the Middies.

Alexander began swimming competitively with Empire. While attending Ardsley High School he was a member of the varsity team serving as captain his senior year.