Sean an  ASCA Level 4 Coach (Level 5 educated), began his professional coaching career as the Head Age Group Coach of the City of Mobile Swim Association in Mobile, AL after graduating and swimming collegiately at Gannon University in Erie, PA. While at  CMSA he was awarded the Southeastern Swimming Age Group Coach of the Year in 2005 and selected to the Zone All-Star Coaching Staff in 2005 & 2006. After  CMSA, Sean coached for the Nashville Aquatic Club in Nashville, TN as the Senior Assistant. Sean got the opportunity to work with 6 of  NAC's Olympic Trials Qualifiers during that time. After NAC, Sean then coached for the Eagle Swim Team in Baltimore, MD. Beginning as the Head Age Group Coach his responsibilities expanded over those 7 years on EST to include taking over the Senior group as well as being named the Associate Head Coach of the Eagle Swim Team. Sean helped guide EST swimmers to three consecutive short course Sectional Championships in 2011, 2012, & 2013 for a total of 6 overall titles.  After EST he then took over the reins and became the Head Coach of the Weymouth Club Waves near Boston, MA.  In his two years with the Waves the team produced 2 USA Swimming Junior National Qualifiers, multiple Sectional qualifiers, and multiple New England champions while rewriting the Waves Team Record Book. 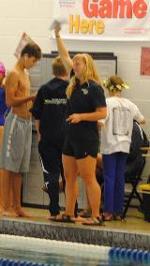 Jessica is an ASCA Level 2 Coach (Level 3 educated) and began her coaching career in 2011 with Billings Aquatic Club assisting with the Senior Group. After moving to Minnesota in 2012 to continue coaching and teaching lessons she returned to Billings Aquatic Club in 2015. In 2016, Jessica took over the role as Head Age Group Coach for BAC and primarily coaches  our Silver, Bronze, and Junior Stingray Groups.

During her coaching career, Jessica has helped swimmers achieve their goals and has coached State, Regional and Zones Qualifiers.  She has consistently produced Montana Relay & Individual State Champions for BAC as well as a number of Team Record Holders.   Coach Jessica was a 2018 Montana Sr Zones Coach & is the 2019 Montana Age Group Head Coach.  She has been an integral part of the coaching staff when BAC won their most recent State Championships; 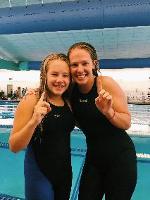 Olivia graduated from Billings Central High school in the spring of 2017. During her four years at Central she swam competitively for the High School team and was able to be apart of the team when they won the class A title. Olivia started her competitive swimming career in the fall of 2010 when she joined the Billings Aquatic Club. During her time on BAC, she was able to participate on both long course and short course state teams as well as score points at each of those state meets.  Olivia was a part of the most recent state meet leading to BAC's Long Course State Championship Overall Team Trophy along with a Girls & Boys Team Championship Trophy.  Olivia is excited to give back to BAC and help build our team & culture from the bottom up as she will assist and coach the Junior Stingrays & Bronze Groups.

Morgan grew up swimming in Billings and has over 12 years of experience in the sport, as well as several years' experience in swimming instruction. In addition to club swimming, Morgan swam for Billings West High School and went on to swim for Boise State University during her undergraduate degree. Morgan will be helping with the Bronze and Jr. Stingrays Groups. A former Stingray, Morgan is excited to return to the pool as a coach and share her love of swimming with a new generation of Stingrays.