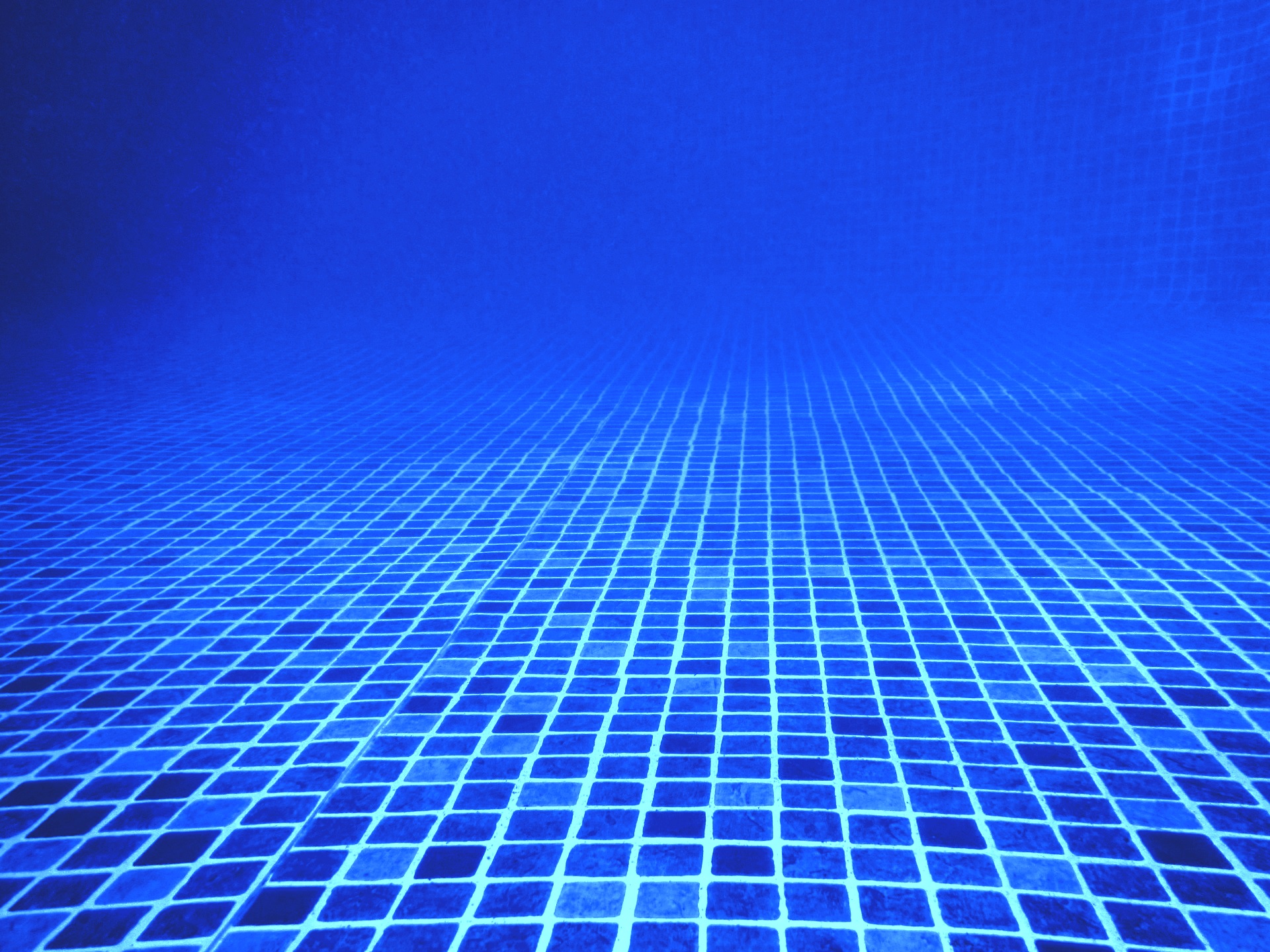 George comes to the Blazers from the Iowa Flyers, and TOPS swim clubs.

He was born and raised in Auckland, New Zealand. George swam for the Mount Eden Swim Club. He participated in Age Group Nationals where he finished Top 5 in the 100 and 200 Backstroke. George also competed in Team Surf Lifesaving Championships. He achieved a BA/BCom from the University of Auckland in Ethics and International Business.

He was the head coach at TOPS swim club in Chicago, IL where he had both Junior and Senior National Level Swimmers and a Top 15 team finish at YMCA Nationals. He coached High School Boys at ORPF where they finished top 10 in Illinois High School State. George has coached multiple YMCA National finalists, USA Junior National, and Senior National Qualifiers. He spent a year at IFLY where he coached swimmers to multiple state records and National Top 10 age group rankings. In 2018, George was named Age Group Coach of the year in Missouri Valley Swimming.  He has also been the Head Zones Coach for Missouri Valley swimming in the Summer of 2017 and 2018.

When asked what his favorite thing about coaching was, George stated, "Seeing kids achieve something they worked so hard to get and at one point probably thought was impossible."

In George's free time he enjoys hanging out with his Wife Tessa and son Quinn. He likes to ride bikes, snowboard and to watch & play cricket.

Coach Mary-Catherine Ivey is the Head Junior II coach, overseeing the programs at both Blue Valley West and Shawnee Mission North locations. Mary-Catherine came to the Blazers in 2015 from the Aiken-Augusta Swim League (Georgia LSC) where she was the Aiken Site Director and brings over 12 years of coaching experience, having coached with all levels from beginners to National level senior swimmers.

She has a B.S. in Exercise and Sports Science and a Minor in Business from the University of South Carolina - Aiken.  Mary-Catherine is originally from South Carolina and currently lives in Merriam, K.S.  In her free time, she enjoys yoga, attending Sporting KC games, reading and spending time outdoors.

Coach Shawn grew up in Topeka, Kansas and swam for Topeka Swim Association (TSA) and Mid America Swim Team (MAST) under legendary coaches Casey Converse and Paul Shubert.  Before coming to the Blazers in 2013, Shawn was the Head Assistant Coach for TSA from 1994-1996.  In that time, Shawn attended the 1995 National Age Group Coaching Conference, was a 1996 Zone C 11-12 year old girls coach, and started TSA's weight training program and the Varsity (High School) team. Shawn was also the Head Coach of the Roeland Park Stingrays from 2013-2018.

While coaching for TSA, Shawn attended Washburn University and studied Exercise Physiology & Kinesiology along with Public Relations. During her time away from from coaching, she always felt a strong pull to get back to her love of teaching swimmers. She is thrilled with the opportunities the Blazers have given me, including the chance to be the full-time Head Development Coach. 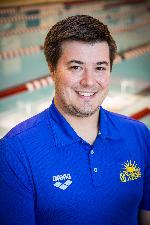 Andrew Schmidt was born and raised in Western Massachusetts where he started his coaching career in 2002 with Pioneer Valley Aquatic Club and Longmeadow High School. Andrew started working with the 8 & under swimmers and in his first season coached the High Point Champion for the boys at the New England Short Course Championship Meet. After PVAC and Mei’s Typhoons joined forces Andrew experienced even more success. In 2009 alone Andrew coached the 9-10 Female High Point Champion the same year she broke the New England record in the 100 Breaststroke and coached a senior swimmer to 3 Speedo Summer Junior National cuts. As a high school head coach (2005-2009), Andrew coached his teams to 22 school records, 5 Western Massachusetts records, and 1 Massachusetts state record, while also finishing as a state runner-up on the girls side in 2006.

After moving to New Orleans in the fall of 2009, Andrew joined Nu Wave Swim Team as the Pre-National coach in the Spring of 2010 and was named head coach of Brother Martin High School Swimming in 2011. As the Pre-National coach Andrew coached swimmers to 9 Florida Sectional cuts, numerous team records, and numerous individual and relay State championships. He was named to the Louisiana Zones Team in 2011 as the 11-12 age group coach and 2012 as the coach of the 15-18 year olds. In the summer of 2012 he took over Nu Wave for the departed head coach and trained the National group to one Speedo Summer Junior National qualifying time, one Speedo Winter Open qualifying time, and numerous Texas and Florida Sectional cuts. In his tenure as a Nu Wave coach, Andrew helped the team jump from a consistent 7th place team at the LSC state meets to being one of the top teams in Louisiana, with two 2nd place and one 3rd place finish as a team in the last three State Championship meets.

In the Summer of 2013 Andrew joined the Lawrence Aquahawks and helped grow the Aquahawks in both numbers and accomplishments. His swimmers have participated in the All-Star meets, Zone meets, Sectional meets, NCSA Junior Nationals, and Speedo Junior National meets (both Winter and Summer). He has had a swimmer participate in the Junior World Championships in 2015 for Puerto Rico, and his swimmers have broken dozens of team records and two Missouri Valley records.

This season will be Andrew’s first with the Blazers. Andrew jumped at the chance to join the Blazers staff and is excited to lead the Junior 1 group! Don’t hesitate to reach out with any questions you have! 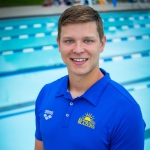 Born and raised in Riga, Latvia, Uldis started swimming at the age of 8 with his local club in Riga. He earned his spot on the National team and there began his journey to loving this sport. As a part of the Latvian national team, he participated in the European Junior Championships, European Championships, and the 11th FINA Short-Course World Championships in Istanbul, Turkey. Before moving to the United States, Uldis won several national championship titles and held a national record in breaststroke events and relays from 2011-2014.

Uldis graduated from Missouri State University in 2018 with a degree in Physical Education and as an alumna for the Men's Swimming and Diving team. Uldis was recognized as 2014's MSU Male Freshman Swimmer of the Year and received the Darin Kent Spirit Award for the 2016-2017 season.

Coach Alex has been several roles with the Blazers since 2011.  He is now serving as the Head Senior I Coach and oversees communication for the Senior II and High School Prep groups.  In the past, Alex has been a deck coach at the Blue Valley North and Shawnee Mission North locations, as well as the Lead Junior II coach for SMN.  Alex is also a math teacher at Shawnee Mission North and has been the Head Girls Swim and Dive Coach there since 2014.  Alex also coaches with the Mission Marlins in the summer.  Along with being the Coach for the boys' teams at both Mill Valley and DeSoto High Schools for 3 years.

Alex was a competitive swimmer for 12 years, including 4 years at Bishop Miege High School.  Alex played water polo for 3 years at Kansas State University (GO CATS!) and graduated from Mid-America Nazarene University in 2015 with a degree in Secondary Math Education and an ESOL endorsement.  Alex is very passionate about swimming, has worked with swimmers of all levels, and loves to share his passion and love of the sport with his swimmers. 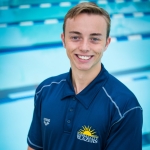 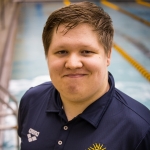 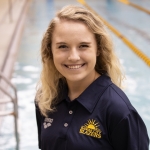