In my career I have been an Age Group Coach, Senior Coach, and a Head Coach along with being an administrator for each team I have coached.

It has been a privilege to coach thousands of swimmers, all willing to train beyond the group expectations. Every swimmer recognized the importance of stroke technique and made the effort to become proficient in every stroke. Through out my career I have had many swimmers ranked in the National Top 16 covering every stroke and distance. I have also had the privilege to coach swimmers ranked consistently in the top 10 for the Walt Schlueter Stroke Awards. In 2008, eight swimmers I coached since age groupers qualified for Olympic Trials. I have been a part of several teams with Olympic qualifiers and Olympians but this was a significant Trials in my career.

The best part of coaching is watching young athletes become young adults within and outside of swimming. I am very proud of all the athletes I have had the privilege to coach, especially as they have started to have their own swimmers!

It's exciting to be part of the growth and improvement of all the swimmers of Inspire! 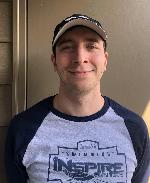 In late 2014, at the age of 20, Sean became the youngest head swimming coach in Omaha Public School history when he accepted the position at Omaha North High School.  Since Sean started coaching Omaha North, his team has broken 5 school records, including one which was set in 1999 by one iNspire’s own coaches - Jake Kruger. In February of 2016, Sean was inducted into the Metro Conference Swimming Hall of Fame for his accomplishments as an outstanding high school athlete.  From 2016 thru 2019, Sean served as Midwestern Swimming’s elected Age Group Chair and operated as team manager for Midwestern’s Zone and All-star teams.

Coach Kruger has been a part of the swimming community in Omaha for over 20 years.  Some highlights during those 20+ years include:  being a part of the behind-the-scenes work of the USA Olympic Swimming Trials as a lifeguard; coaching a swimmer from learn-to-swim lessons through to joining the US Coast Guard Academy; and watching one of our iNspire athletes break one of his old high school records.

Coach Kruger enjoys the opportunity of regularly coaching the different iNspire practice groups, as well as, the challenge of developing the swimmer’s basics for breaststroke.  He also loves to be a part of teaching each swimmer how to develop their feel for the water.

Finally, “bee” sure to ask him about his adventures of starting a honey bee yard south of Omaha in Otoe County.