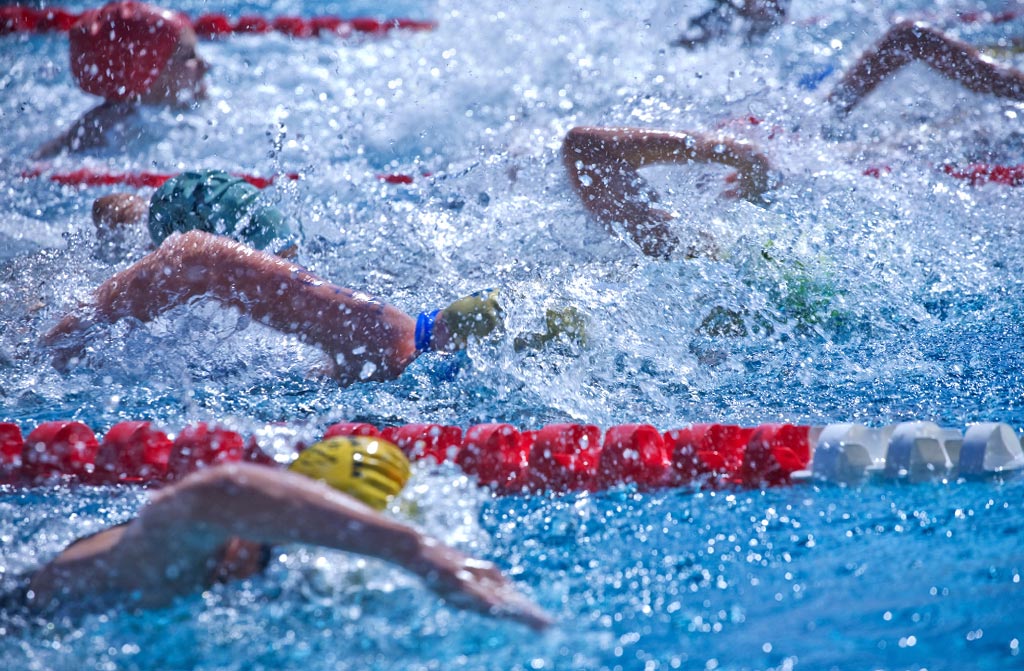 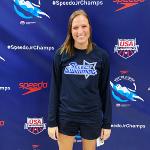 Coach Nikki joined the Select coaching staff in August 2013.  Born and raised in Lincoln, Nebraska, swimming has always been a big part of her life.  At a younger age, Nikki swam for several different teams, including Nebraska Aquatics, Swim Omaha, Greater Nebraska Swim Team and Lincoln Select.  She often traveled for swim meets and competed in All-Star, Zones and Sectionals meets.

Nikki attended Lincoln Southeast High School from 2003-2007 where she competed on their varsity team for all 4 years.  During her time at Southeast, she specialized in sprint freestyle and breaststroke, winning the 100 breast 4 years in a row at the Heartland Conference Meets and placing in the State Finals each year for sprint freestyle.  During this time she spent summers helping coach various city league teams and GNST.

After high school graduation, Nikki moved down to Fort Worth, Texas to attend Texas Christian University (TCU).  She swam at TCU for all 4 years, continuing her training in sprint freestyle and also competing for the team as a relay member.  She graduated in 2011 with a Bachelor’s degree in Education with an emphasis in English and English as a second language.

Following college, Nikki moved back to Lincoln and is currently an English teacher at Dawes Middle School.

Coach Tiffany joined the Select coaching staff in November 2015. Since the age of 5 years old Tiffany has been swimming competitively until her daughters Chloé and Serenity started swimming.  Born and raised in Nebraska, she swam for Eastridge Swim Team, and Nebraska Aquatics.  Tiffany also competed in Zones in 1991 and every year in Cornhusker State Games until 2013.

Coach Tiffany attended Lincoln East High School from 1993-1997 where she competed on their team for all 4 years.  During her time at Lincoln East, she specialized in 200 freestyle, 500 Freestyle and 100 backstroke.  She also competed all 4 years at State finals and placed each year in her 100 backstroke, 200 Medley Relay, 400 Free Relay.  In 1996 Tiffany helped her team mates break the school record in the 200 Medley Relay and 400 Freestyle Relay.

After high school graduation, Tiffany moved to South Dakota on a swimming scholarship with the Yotes at University of South Dakota in Vermillion.  She swam for USD for 3 years where she specialized 100 backstroke, 200 backstroke and middle distance events.  In 1997-98 at the NCC swim meet Tiffany had surprised herself by dropping off a time in the 200 backstroke in prelims that just put her 2/100’s of a second shy of making national cuts. Tiffany also contributed in setting the 400 Medley Relay in both USD meter records and pool records in 1999 (4:44.29) to which the record was not broken until 2013.

After college, Tiffany moved back to Lincoln to continue passion as a Special Education Teacher and Swim Coach at Lincoln High School.  In 2006 Tiffany opened up her own daycare and continues to do that today.

Coach Jennifer joined the Select coaching staff in September 2016 after moving to Nebraska from Alma, Michigan. She swam for Alma Flyers Swim Club for thirteen years. Jennifer also swam 4 years of varsity swimming for Alma High School helping break both the 200 free relay and 400 free relay school records. She competed in both the 100 fly and 500 free throughout conference and state meets.

Jennifer graduated from Hillsdale College in May with a degree in financial management. Competing in the GLIAC Conference, she received achieved 3 D2 B cut time standards in the 1,000 yard free, 400 free relay, and 800 free relay.

In addition to coaching, Jennifer is currently a credit analyst at West Gate Bank.

Coach Uriah has been swimming since before he can remember. He started learning how to swim in Winfield, Kansas when he was in elementary school and hasn’t stopped since. When he moved to Lincoln in 4th Grade he competed as a Prairie Life Penguin during the summers, where he met Coach Greg Fleming who ignited his love for the sport. He began competitive club swimming when he was in 8th grade at GNST. After his freshman year at Lincoln East High School, he switched clubs to Lincoln Select Swimming and swam for them through his College Career. As a Lincoln East Spartan, Uriah was a 4 time Athletic Letter recipient from 2009-2012. He competed at the Nebraska State Swimming and Diving State Championship Meet his sophomore through senior year in the 100 Breast Stroke, 200 IM, and in multiple state relays. He was part of 3 State runner up team titles and was a boy's team captain his senior year. In 2010 he began his coaching career at Hillcrest Country Club coaching the 10&Unders. He helped coach the Waterbugs to 4 City CC League Championships from 2010-1013.

After Graduating from Lincoln East High School, he began his collegiate swimming career at William Jewell College under Head coach Mark Gole from 2012-2016. During his time at Jewell, he was a multiple school record holder in both the 100 and 200 breast stroke and several school relays. He still currently holds some of the top 10 fastest times in school history in the 100 and 200 Breast Stroke, the 200 IM, along with several relay splits. He competed at both the Northern Sun Intercollegiate Conference (NSIC) his freshman year and the Great Lakes Valley Conference (GLVC) for his remaining 3 years. While in college, Uriah learned everything he could about the sport of swimming including how to train, how to incorporate race strategy into races, and the cunning edge stroke techniques of the time.

In 2016, Uriah graduated from William Jewell College with a bachelors degree in Psychology and accepted a job as a Para Educator at Lincoln East High School the following school year. During the 2016-2017 high school winter sports season, he was a volunteer assistant coach for the Lincoln East Spartans Swimming and Diving Program. He was also the assistant head coach at Heartland Aquatics during the 2017-2018 short course and long course swim seasons. Uriah is looking forward to getting to know each family and swimmer here at Select and is excited to be back home at LSS.

Coach Louie began his coaching career in 1983 as an assistant coach with the Taylor Pools Sharks(TPS) USA swim team in Taylor, MI. His talent as a coach and love of the sport was quickly recognized and he was promoted to the head coach position after one year. The team grew from 30 swimmers to nearly 100, which was an impressive accomplishment considering the local high schools did not offer swimming as a sport. His swimmers attained numerous national Top 16 times, State championships, Zone championships and Junior National qualifying times. As a team, TPS consistently placed Top 8 in the State championship meets. After spending time to raise his new family and start a career as an engineer, Coach Louie took over Southern Michigan Aquatic Club(SMAC) in 1997. The team was very small, around 35 swimmers, and within three years it had grown to 170 swimmers. Swimmers on SMAC broke 19 State records, won nearly 100 individual State championships, 10 became Zone champions and 6 Sectional champions. As a team, SMAC was a perennial top 5 finisher at the State meet. Numerous swimmers achieved National Top 16 times, with one National #1 swimmer ranking. Coach Louie has also coached swimmers in the 2004 and 2008 Olympic Swim Team Trials, participated in several National championship and US Open meets and has sent dozens of swimmers onto the college level for swimming .

Since the teams start up in 2008, LSS has become one of the top teams in the region. They are the current 2018 Short Course and Long Course MW Swimming State champions, earning each team championship since 2010. Coach Louie has been elected the Head All Star coach(2010, 2011) and Zone coach(2010) as well as the 2009, 2011 & 2013 Age Group coach of the year. Select swimmers under his guidance have consistently achieved National Top 10 times, broken numerous MW Swimming records and earned berths on the All Star and Zone teams. Currently, 11 Select swimmers have been invited to the Central Zone Select Camp, one of the highest number of swimmers attending this camp in the Midwest. Louie handles the administrative duties for the team.

Coach Nicole joined the Select coaching staff in April 2019. She was born raised here in Lincoln, Nebraska, and  started to swim at the age of 10. She swam for Greater Nebraska and Select Swimming throughout her career. She  attended Lincoln East High School from 2013-2017. There she was on the swim team all 4 years. She had many top  finishes in her high school career, as well as a member of the state team all 4 years.  Nicole currently attends The University of Nebraska-Lincoln, where she studies Music Education. She also plays  trumpet in the Cornhusker Marching Band. Besides school and coaching, she is a lifeguard at one of the YMCA’s  here in town.

Coach Megan grew up in Texas and started swimming competitively at the age of 7.  She attended the Univiersity of Nebraska-Lincoln where she swam all 4 years, specializing in backstroke, butterfly and sprint freestyle.  She currently teaches 6th grade Humanities at Dawes Middle School.  She also teaches swim lessons at the YMCA.

Megan's primary groups for coaching is the minnows, bronze and white groups.