Heather Moffitt - Head Coach
Head Coach Heather  came to the North County Aquatics Swim Team in August of 2007. Throughout the years, she has worked with various levels ranging from the younger age group swimmers,  to the senior level athletes and has coached high school swim teams. She has taught all levels for over 17  years and counting. Heather is the Head Coach for Paso Robles School District Special Olympics Program and Head Coach for San Luis Obispo County for Paso Robles District Special Olympic Programs.
Heather was born in Atascadero, CA. and was raised on the Central Coast. She has swam competitively since the age of six.  Heather swam for California State University of Bakersfield a Division II school. Heather graduated with a B.S. in Criminal Justice and a minor in Child Psychology in 1995. Heather was a Deputy Probation Officer II, for Santa Barbara County and Kern County. She has competed in numerous Triathlons throughout the years and still competes in the local Wild Flower triathlon held each May. Coach Heather is a certified instructor for Life Guarding, Title 22, CPR, and Junior Life Guarding.
Heather has two children, Kasey (21) attends Cal Poly  and Kendall (16) who currently swims for NCA.
"THE BODY ACHIEVES WHAT THE MIND BELIEVES"

Stephanie began swimming at her hometown pool and participating in water sports as a young child.  She has always had a love for the water and enjoys swimming, waterskiing, wakeboarding, and playing in the waves at the beach on her board or kayak.  Stephanie has worked with and educated children since the 1980's and received her teaching credential from Westmont College in 1992.  With over 20 years of teaching experience, teaching is an integral part of her life whether it be in the classroom, in pool, or on the court.  When her daughter started swimming at age 5 she became very involved with her club team.  After moving to Templeton in 2006 Stephanie's family became involved with NCA.  Stephanie is a swim mom, has served on the NCA Board, and began instructing swimmers in 2010. She has worked with NCA's most novice swimmers teaching water safety and beginning swimming.  She is a trained and certified swim coach with ASCA certified level 1 and now serves as NCA's stroke coach for beginning and intermediate swimmers. Stephanie's passion for teaching and coaching help form values and discipline in NCA's developing swimmers.  She works with all types of children instilling a positive work ethic and a passion for the water.  With her continued training and aquatic knowledge, she provides a safe environment and the foundation in technique giving NCA swimmers as much potential for success as possible.

Jackie has always had an affinity for water. She grew up on a youth swim team in southern California and continued swimming with a master’s group through college at Cal Poly. Her daughter began swimming with NCA in 2012. Wanting to be more involved with this exceptional team, Jackie began coaching in the “Dragon Pond” in 2013. Here she teaches novice and beginning swimmers the basics of water safety and a foundation of swim strokes. She focuses on body position and stroke progression skills that can be carried into each subsequent swim level. Coaching with NCA has allowed Jackie to share her passion with young swimmers and instill the same level of enthusiasm and love for the water that she has developed since childhood.

Coach Lindsay has over 10 years of coaching experience. Lindsay first swam for North County Aquatics as a competitive swimmer at the age of five. Then, she started as an assistant age-group coach for North County Aquatics in 2004 at age 21. Lindsay has coached all levels of swimming from the most novice youngsters, Parent & Me, Age Group swimmers, and assisted in the Senior level swimmers.  Coach Lindsey strives to create a  program where children develop their character, their mind, and a love for the sport of swimming, through highly quality instruction and fun. When Lindsay is not coaching, she enjoys spending time with her family, and working out. 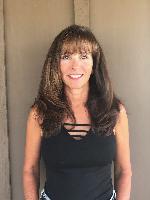 I’ve been involved with swim for many years.  I have worked with children of all ages and skill levels. I believe in promoting a positive environment that fosters fun and teaches water safety.  I treat all my students fairly and equally regardless of circumstances and/or abilities, making each one feel good about themselves while encouraging a fun learning experience.  I am very patient in my teachings and have had very good success with all of my students.  Some have been repeat students.  For the past year, I have had the privilege of being able to work with the Special Olympics swim groups twice a week.  Working with these children and young adults leaves me smiling for days.  I have also worked privately with other special needs children.

In addition to teaching swim, I am a Group Fitness Instructor at the club, teaching both spin class and Aqua Aerobics. In my spare time, I’m a marathon runner, cyclist and participate in triathlons.  I have been married for 25 years and have two amazing young men who are involved in swimming, triathlons, running, and power lifting.