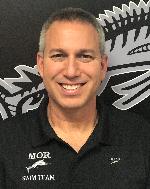 Coach Silver formed the Marlins Of Raleigh in the summer of 2001. He has been coaching swimming since 1979 and has had swimmers competing at Jr. and Sr. Nationals since 1982 including 2 years as an assistant with the Bolles School Sharks and 17 years as head coach of the Raleigh Swimming Association. The 5 years spent coaching age group swimmers before becoming a head coach gives him a unique understanding of what it takes to help young swimmers get from novice to national level swimming. Voted NC Swimming Coach of the Year 5 times, Coach Silver is certified at the highest level (Level 5) by the ASCA. He lead MOR to Gold Medal recognition in 2017, 2018, 2019 and served on the staff for Team USA at the 2017 FINA World Jr. Championships. He has served on USA Swimming’s Sr. Development Committee in charge of time standards and on the Club Development Committee.  Coach Silver is married to Caroline, a Cary Optometrist, and has 3 boys, Tyler, Christopher and Ryan. 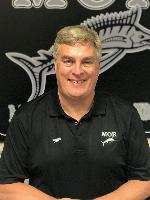 Coach Watson began coaching in Raleigh in 1978 with the Northbrook Country Club summer league team (1978-80, 81, 2006-2008).   His year-round coaching jobs have included four years as an assistant with the Tarheel Aqua Racers (1981-1985); 21 years as Head Coach and founder of the New Wave Swim Team (1985-2006); and 13 years with the Marlins of Raleigh Swim Team (2006-present).  Watson has coached numerous nationally-ranked athletes throughout his career.  Watson is also very active with the North Carolina LSC and currently serves as the Programs Vice-Chairman and Camp Coordinator.  He is also currently serving as the Age Group Chairman of the Southern Zone.In his career Watson has coached swimmers who have qualified for Olympic Trials, Nationals, Junior Nationals, Futures, Zones, Sectionals and State Championships.  He has also coached nationally ranked athletes and athletes who have achieved state record performances. 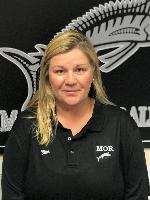 Coach Cara Cameron has been coaching in Raleigh for 23 years.  Cara started with RSA under the direction of Paul Silver and moved over to coach with MOR when she merged the RSA North site with MOR.  Cara is a level 4 ASCA Swim Coach who grew up in Raleigh swimming for TAR.  Cara is the North Raleigh Head Site Coach and she coaches the AG1 8-under group at the North Raleigh site.  In her career, Cara has coached swimmers from all levels from Olympic Trial Qualifiers, Senior Sectional Qualifiers, State Champions, State Record Holders and Top 5 in the Nation to the group she calls home, AG1 8-unders. 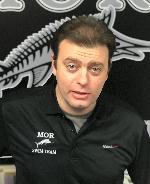 Coach John has been the site coach at the Riverwood MOR site since 2004. Numerous state champions, sectional and junior national level swimmers have come from the Riverwood group. To date eleven swimmers have gone on to swim collegiately from there.  John has extensive open water swimming experience and takes a group to the open water state championships every June.  John is a UNC graduate and was an ACC Champion and NCAA qualifier in breaststroke and IM for the Tarheels. 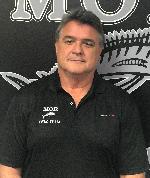 Coach Billy has been a mainstay in Raleigh swimming for almost 40 years.  He came to MOR after being the Age Group coach and Head Coach for local teams TAR, RACR, and RSA North. He worked as the Aquatics Director for Ravenscroft School for 21 years. Coach Billy is a Level 5 certified coach (it’s highest level) by the American Swim Coaches Association.

Billy leads the AG 2 and AG3 Silver groups at the North Raleigh site. He has developed swimmers of all ages and abilities including state, sectional, and nationally ranked swimmers as well as  Age Group national record holders.  Billy has been named the recipient of the NC Swimming Age Group Coach of the Year Award four different times.

Coach Cara says…… “Coach Billy has been coaching in North Carolina for over 40 years. I personally swam for Billy at TAR in the 80's. Billy's impact on me was to become a coach-a love of swimming that continues to this day after 42 years. At MOR he inspires his swimmers to WANT to swim better, swim faster by having such a positive attitude and love of the sport. It's infectious.” 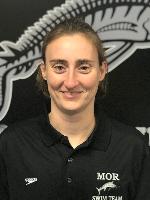 Coach Lizzy is a native of Cary, NC. She swam competitively on both RSA and MOR under Coach Silver’s leadership for 8 years.  She graduated from the United States Naval Academy in 2007 with a Bachelor of Science degree.  While at USNA, she was a member of the varsity swim team and crew team.

Coach Lizzy has been coaching swimming in the Raleigh/Cary area since 2007.  She worked at Triangle Swim School for 5 years, giving her a strong foundation for teaching the fundamentals of swimming and correct stroke technique to young children.  She was an assistant age group coach at RSA for 3 years and a lead age group coach at WAVE for 2 years.  She also coached the Lochmere Monsters (a local TSA team) for 4 summers, working primarily with the 6&Under and 7/8 age groups.

Coach Lizzy joined the MOR staff in August 2016 and coaches the AG1 and AG2 groups at St. Mary’s. 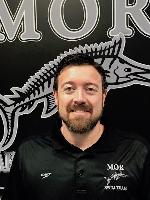 Coach Lindsay joined MOR September 2017. She is originally from South Jersey but relocated to Raleigh, NC in August 2017 after spending 14 years overseas. Most recently, she has worked as the Swimming Manager/Head Coach for a group of 9 schools locagted in Kenya and Tanzania. Her time spent internationally provided her the experience to work and travel with several National swim teams including Zambia, Kenya, and Uganda.  Lindsay enjoyed a successful four year D1 swimming experience at ECU before hanging up her cap and goggles and putting on her full time coaching cap. Lindsay is currently the coach for our Silverton AG 1 and AG 2 groups. 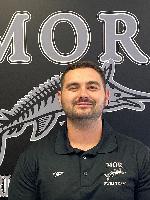 Coach Austin is a Florida native, born and raised in Naples. He first got his start coaching in his hometown with T2 aquatics and worked closely with Paul Yetter (2008 Olimpic Coach). During his first year of coaching he had the oportinity to assist paul with coaching the Senior Group, and Senior Preformance Group. Then in the summer of 2016 he left T2 aquatics to go work underneath Robert Pinter at Gator Swim Club (2016 and 2017 Gold Medal Club). There Austin spent the next year and a half coaching every level of age group swimming the club had to offer eventualy becoming one of the Sectional/National level assistant coaches and the Gold group coach (Exclusive to Florida Age Group Champions).  During the time he spent in Gainesville he also had the oportunity to be one of Floridas 2016 Southern Zones Championship coaches.  He also had the experience of being hired on to be the head coach of PK Younge High School; where he led the team to not only the First Place D istrict Title but also the schools first ever Second  Place  Regional C hampionship on the Womans s ide After his time with Gator Swim Club he was humbled to accept the position as the Head Silverton Site Coach for MOR. Austin is extremely grateul for the oportunity to work under Head Coach Silver and be apart of one of the best swim clubs in the entire country. 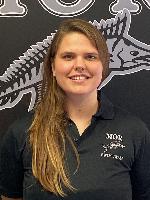 Hannah Lincoln Close has been on staff with the Marlins of Raleigh since 2017. In that time, Coach Hannah has developed several nationally ranked swimmers, state and sectional level champions, and state and US National Age Group record-holders.
Hannah began coaching in 2015 immediately following her swimming career. She began swimming competitively at MOR her sophomore year of high school while also competing for Leesville Road High School. While training under Coach Silver her senior year, she broke two state records at the NC High School State Championships and was named MVP of the meet. The summer after her senior year, she qualified for the Olympic Trials in the 100-meter butterfly and later went on to compete for the UNC Tarheels; it was there she became a three-time All-American, ACC record-breaker, two-time ACC Champion, and multiple UNC team record-breaker.
In June 2016, she married her high school sweetheart and fellow Marlin/Tarheel, Will Close. Together, they have two girls, Avery and Natalia.
Hannah’s coaching philosophy is grounded upon an inspiring, inclusive team culture: "It is important to teach athletes to embrace adversity and face challenges head-on. In this way, they can learn to rely on those around them and become greater than they could have ever been on their own." 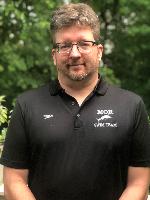 Coach Darryl began coaching with MOR in 2008 and has worked with multiple groups along the way.  Currently, he coaches the Raleigh site Pre-Senior group and assists the Senior group.  He grew up swimming in Raleigh for the Tarheel Aqua Racers, swam for Sanderson High School and graduated from UNC-Wilmington with a Psychology degree.  He spent 3 years in Denver, CO as the Head Age Group Coach for the CAC Stingrays and is back for MOR!

Coach Darryl enjoys challenging and inspiring athletes, surfs as often as possible, and is pursuing a career as a professional C-league hockey player.

Coach Elise is from Naples, FL and swam from age 11-21. She swam for club, high school, college (NC State), and the USA National team (three times) throughout her career. Coach Elise retired from swimming in August of 2018. She is currently studying Psychology and Biology at NC State University and graduating in December of 2019. Aside from school and coaching, she also works with special needs children at a private preschool here in Raleigh. She will continue her education to achieve her masters in Occupational Therapy and Behavior Modification after graduating undergrad. "Working with kids fills about half of my working week and it is my passion to help our next generation achieve success and usable life skills." - Coach Elise 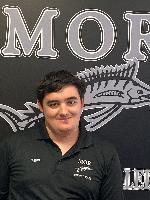 Coach Kevin grew up in Raleigh and swam for the Marlins of Raleigh for eight years. Through MOR, he has been able to not only enjoy the competition side of the sport, but also the coaching side. He started coaching his summer league team, the Coachman's Trail Sharks, in 2011 at age 14, and has continued to coach for them every summer, including as head coach beginning in 2016. While in high school, Kevin also coached for MOR as an AG1 assistant. Kevin competed for the Marlins through his senior year as a member of the Senior Elite group. After graduating from high school in 2015, Kevin began attending NC State, where he continued coaching for MOR as an AG3 Black assistant. He has worked as an assistant for AG1, AG3 Black, Senior, and Senior Elite in his time as a MOR coach, across both the Raleigh and North Raleigh sites.