I was born and raised in Charlotte, NC. I come from a big swimming family from Newport News Va. My mother, aunts and cousins all swam and coached at young ages, some swimming at the college and national level, leading to my love of the water and competition of swim team at an early age of 3. I swam for 15 years until turning 18, achieving many awards along the years. Breaststroke became my stroke of choice. At the age of 16, I began lifeguarding and swim coaching at the Charlotte YMCA, leading to year round competive coaching and taking the lead under head coach Rachel Henry.  Heading to Appalachian State at the age of 21, I joined the year round coaching staff of the Watauga Swim Team. 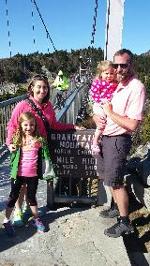 I have lived in Boone since 2007 with my wife Samantha. We have 2 daughters, Addison who's 10 and Riley who's 6. I grew up in a family of swimmers. Per my mother, she took me to my two older brother's swim meet when I was just 10 days old. I always enjoyed playing other sports, particularly basketball, but swimming was my all around favorite. I made more friends in swimming than I ever did on a basketball court. To me it was an opportunity to do something that not everyone can do and those that you swim with and against are part of a special group of people. I like competition and swimming gave me the chance to try my best to beat my friends at something, then shake their hands and go hangout with them until it was time for the next event. To me, swimming is the best mix between an individual and a team sport. My dad was the coach of the Franklin Amateur Swim Team (FAST Fins) from 1980 to 2000 and I swam in my first swim meet a month after I turned 4 at Patton Pool in Hendersonville, NC. I can still remember looking down that 50 meter pool, in my memory, it looked like it was a mile long. I only had to swim to a rope at the 25 meter mark. How did I do? Well, there were 8 swimmers in my heat, and the kid that finished 7th was standing on the side of the pool cheering me on when I finished. Things got better from there, I swam on the team for 15 seasons. In that time, we never lost a swim meet, and grew from a team with about 40 swimmers to having well over 100 swimmers. I was part of a relay team that stayed together for 13 of those 15 years and we never lost a relay. We still hold the team record for the 200 Medley and 200 Freestyle relay today in several age groups. I won multiple most valuable swimmer awards, All Star awards, and qualified for multiple B, A, AA, and AAA times. I always say that my family was swimming before swimming was cool, in fact, when I graduated high school in 1996 it never occurred to me that it would be possible to swim in college. I enlisted in the Army out of high school and won the swimming portion of the 18th Field Artillery Brigade Olympics in 1997. After that I was removed from competitive swimming until our oldest daughter joined the Watauga Swim Team in August of 2015. She shares my love for the sport and is probably, pound for pound, a better swimmer than I was at her age and she has less experience. As coach, I want to pass on to the kids of WST my love for the sport. I want them to understand that they are part of a group of kids that have a special talent that not all kids have. I want them to be challenged and encouraged, and to learn some valuable life lessons of hard work and friendly competition.