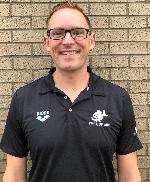 Coach Kirk joined the WNCY Piranhas coaching staff in 2013 and shortly after became the Director of Competitive Swimming for YMCA of Western North Carolina. Since joining Piranhas he has coached National Group swimmers to 5 YMCA individual national titles.

In 2013 Coach Kirk moved to Asheville from Tallahassee, Florida where he was an Assistant Coach with FSU, where he coached for  3 total years over two separate stints. During his time there he coached multiple NCAA All-Americans and served as the Men's recruiting coordinator. FSU earned top 5 finishes at ACC's for both Men's and Women's teams during the 2013 season.

Prior to coaching at FSU, Coach Kirk spent 6 seasons as an Assistant Coach at the University of Iowa. During this time, he helped build the Hawkeye program. He assisted in improving their finishes at Big Ten Championships setting new school records and climbing the CSCAA rankings. The 2011-12 season was historical for the Hawkeyes as Kirk helped guide the Men's team to their best Big Ten finish (5th) since 1996. They completed the season ranked 14th in NCAA Division I. In 2012 he also coached 14 swimmers to Olympic Trial Cuts.

Kirk earned his bachelor's degree in Mass Communication from Auburn in 2002. He received a Master's degree in Physical Education-Sports Administration from Florida State in 2006. Kirk hails from Albuquerque, New Mexico. He and his wife, Kendra have 2 sons Pierce and Kirby. 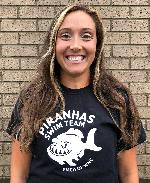 Coach Kelly joined the WNCY Piranhas coaching staff in January 2017 and became the Assistant Director of Competitive Swimming in August 2017. She coaches the elite age group level swimmers in Chomp Group in Asheville.

Coach Kelly hails from New England Swimming where she swam for Bluefish Swim Club in Massachusetts. With Bluefish she was 3rd place high point winner in New England and competed in multiple Junior National Championships. She placed second in the Massachusetts High School State Championships in both the 100 fly and 200 freestyle. Coach Kelly went on to swim freestyle at the Division I college level at Lehigh University in Pennsylvania where she broke the 200 freestyle freshman record. She graduated with a Bachelor of Science Degree in Business and Economics. Coach Kelly hiked the Appalachian Trail in 2015 and moved to North Carolina in 2016. Her true passion is creatively supporting and motivating age group level swimmers to reach their true potential at an elite level. 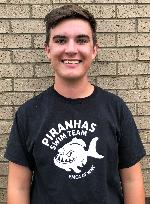 Coach Darian joined the WNCY Piranhas coaching staff in September of 2018. He started swimming at a young age, spending his summers always around the pool. Darian swam at Hendersonville High School for 4 years. During those years he was a team captain, swam at regional and state finals and set a school record in the 4x100 freestyle relay. Coach Darian's favorite events are the 200 freestyle and the 100 backstroke.

Darian is currently in college and studying business administration. He also works in aquatics and plans to stay with the YMCA after he graduates. 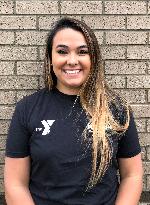 Coach Lauren joined the WNCY Piranhas coaching staff in August 2019. She is originally from Chantilly, Virginia and started swimming with her summer team at a very young age. She set records that are still there today. From there, she joined a club team and continued swimming with them throughout high school. She attended junior nationals her junior and senior years of high school and was a finalist in both 100 and 200 yard backstroke. Coach Lauren also swam at Chantilly High School, and was on the all-state swimming relay team where they set a state record. She was captain her senior year and qualified for the All-State team all four years of high school. Lauren coached her summer swim team as an assistant coach throughout high school. She earned a swimming scholarship and attended the Division I school, East Carolina University from 2015-2019. She set the freshmen record in the 200 backstroke in 2015. She was an AAC conference finalist all four years. Coach Lauren holds the third fastest 200-backstroke time in East Carolina’s history. At ECU, Lauren coached elementary school students and taught them the importance of water safety in her free time.

Coach Lauren graduated in 2019 with a degree in Public Health and is currently pursuing an accelerated nursing degree. Her goal is to teach swimmers to love the sport of swimming! 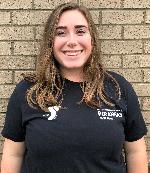 Coach Hannah has been part of the coaching staff for the Piranhas since April 2018. She is originally from Richmond, Virginia where she swam for NOVA where her favorite events where the 200 fly and 400 IM. She also swam in high school for Trinity Episcopal School and over the summer at Hungry Creek Recreation Association. In addition to swimming, she was also a four-year varsity athlete in softball, played field hockey, competed with horse show jumping and an IB art student.
She graduated from Elon University with a degree in Secondary Education and a minor in coaching. She coached the YBAC Hurricanes in Burlington, NC and Willow Oak CC Waves in Richmond, VA. She currently teaches at Pisgah High School and in 2018 started a swim program at the school where she is head coach. She loves aquatics and swimming and hopes to pass on her love for the sport to young swimmers! 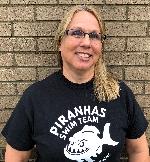 Coach Colleen began swimming competitively in the state of Michigan at the age of 13.  Often that is considered late, but she quickly fell in love with the sport and advanced to State Level Competitions.  In College, she earned a degree in Accounting while working at several different pools coaching, teaching swim lessons and lifeguarding. Then came marriage, children and moving to North Carolina.  When her children were ready to swim, she signed them up for the local summer league and could not stand watching a swim meet from the stands.

Volunteering as an Official was the answer and she developed a new passion for the sport.  As her children progressed through the sport so did Colleen’s Officiating Career.  She has been serving as an official for 20 plus years and has been on the National Deck for over 15 years.   She also serves on the Officials Committee for North Carolina Swimming as the Training Coordinator and Mentor.   She returned to coaching a few times when the Rec League and High School Teams were in the need of someone with competitive swimming experience.

Then came the call to coach once again in Fall of 2018 for the Corpening Y.  The old joy of Coaching was reborn.  Coach Colleen loves to plan, prepare and watch the progress of each swimmer; not only in the pool, but in making life decisions.   Her motto is “do what you love and do it for a lifetime,”  which is a privilege that she has been blessed with personally. 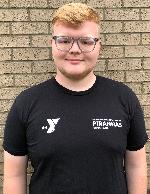 Coach Lake joined the WNCY Piranhas coaching staff in 2018 as an Assistant Coach at our Corpening YMCA branch. He comes to us from the McDowell County Mariners Summer Swim League team which he also coaches in the summer. Lake Silver swam from when he was seven years old until he was sixteen, and has always loved the sport. He is currently a student at Western Carolina University, where he is studying to get his bachelor's degree in business administration and law he then hopes to go to grad school for his master's in public administration. Outside of swimming he enjoys playing music, and being devoted to his church.

Coach Chris joined the team in May 2004 and brings a wealth of knowledge and experience to the program. For 14 years he was the Head Coach of the Montgomery YMCA Barracudas Swim Team in Alabama prior to coming to Asheville. He grew the Montgomery team from the bottom up to a nationally recognized YMCA. He has coached multiple YMCA national champions and record holders, a World University Games participant and numerous US Olympic Trial qualifiers and has served as a USA Swimming Select Camp coach and a Southeastern Zone Team coach. He swam for Tulane University and is a graduate of Auburn University. Coach Chris was voted as NC Swimming Senior Coach of the year in 2011.