Jennifer Purvis has lead the high performance and junior/senior development of Crimson for two years. She was a home-coach at the 2017 USA Swimming National Select Camp at USA Swim HQ in Colorado Springs. Purvis coached two Crimson swimmers to top 8 finishes at the 2016 Speedo Winter Junior Nationals and Crimson won 2016 SCY NE Senior Team Championships. Purvis has been on deck with 2 world top 100 u18s (Bornstein, Yang) and 2 world top 100 swimmers (Egan, Marcantonio). She joined Crimson Aquatics Boston in 2015 after coaching Trent Swim Club in Toronto. As the Senior and Junior coach at Trent she helped  many athletes find success and confidence in their life. She currently leads the Patriots and Masters groups at Crimson and oversees all other groups.

Prior to becoming a head coach, Purvis was an assistant coach at Arizona State University where she helped the women's team to a top-25 finish at NCAAs.While in Arizona she also coached with the Sun Devil Masters team. During her time in Boston as a Head Coach she has created a Crimson Boston Masters team for 18&older athletes looking to continue in the sport they love as she does.  Purvis is known for motivating athletes to achievements beyond their expectation. Her passion for this sport runs deep, very deep. For 20 years this sport was her life and now she's ready to take Crimson kids to the next level.

Before becoming a professional coach, Purvis was a competitive swimmer for 20 years, competing in nationals for over 10 yrs. She is a former National gold medalist and Canadian record holder and 8 year member of the national team. Purvis swam and earned her degree at  Arizona State University. She was an NCAA all American and competed in the 2011 Pan Am Games in Mexico, bringing home 2 medals and finished off her career as a 2012 Olympic trials finalist with personal best times. Purvis received a degree in Design Studies Built Environment and Sociology.

Coach Harris joins us from Bozeman, MT where he was previously the Head Coach/CEO of the Bozeman Barracudas Swim Club. During his time with the Barracudas he managed all team logistics, provided vision and leadership for the program and developed athlete performance and self-confidence; leading to more athletes competing at higher level meets than they have previously seen. In just two years with Coach Harris, the Barracudas ended up breaking over 10 MT LSC Age Group records and over 15 Bozeman Barracuda records and his swimmers have been Western Zones, Pacific Northwest Champions, and ranked in the top 20 in USA Swimming for the 200 BR in the 11-12 age bracket.

Together, Coach Harris brings over 7 years of coaching experience and education. He enjoys providing the opportunity for athletes of all ages and ability to come and learn about the sport of swimming. He is passionate about utilizing all sports as a way to grow confidence, discipline, and an understanding of how to navigate the struggles, successes, and personal responsibilities in one’s life.

Harris’ coaching philosophy is athlete-centered, having fun, and swimming fast. He breaks his coaching focuses 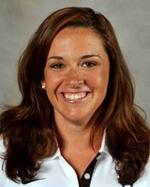 Carter is a graduate of Wheaton College, where she served as an assistant coach for eight seasons. As an assistant at Wheaton, she helped the Lyons to increasing success at the New England Women's and Men's Athletic Conference (NEWMAC) championships, culminating in a runner-up finish for the women's team in 2018. In addition, Wheaton sent eight men and women to the 2018 Division III Championships. Carter coached a two-time NEWMAC Women's Swimmer of the Year and the 2018 NEWMAC Rookie of the Year. Her athletes earned Academic All-NEWMAC honors 32 times, reached the Dean's List 90 times and included one Fulbright Scholar.

In addition to her time as an assistant at Wheaton, Carter also served as the head coach at Evolution Aquatics in Westborough, Massachusetts. She created the Evolution Aquatics program in 2010 and went on to produce two All-Americans, four Junior National swimmers and five Massachusetts State champions. In London in 2012, Carter coached Dorian McMenemy, who became the first woman to represent the Dominican Republic at the Olympics.

Carter received her B.A. in psychology from Wheaton in 2002. She was the team's co-captain and served as chair of the Wheaton Captain's Council.

Jill is a graduate from Bryant University, where she swam in the NEC Conference at the Division I level. In her time at Bryant, Jill won 5 individual events and was a part of 9 champion relays. She was named the NEC Scholar Athlete of the Year, and the Bryant Womens Athlete of the Year for both the 2018 and 2019 seasons. She specialized in freestyle, and brings a lot of expertise to the team. She is currenlty attending Boston College for her Masters in Social Work, and looking forward to another season at Crimson.

McClusky began her coaching career in 2015 as an assistant coach at Nitro Swimming in Austin, Texas, before taking over as the head coach of the Penobscot Bay YMCA Sailfish Swim Team in Rockport, Maine from 2016 to 2018. For the past two years, she has been a graduate assistant swim coach at Smith College. During the summer of 2019, she was a swim coach and camp counselor at the University of Texas Longhorn Swim Camp and also completed the core curriculum of the NCAA Women Coaches Academy through WeCOACH.

Lianne was a Division III All-American and national champion at Denison University before transferring to Division I La Salle University in Philadelphia. Lianne graduated from La Salle in 2014 with a Bachelor of Arts in Communication & Journalism, followed by a Master of Science in Exercise & Sports Studies at Smith College in May 2020.

In addition to her love of swimming, Lianne is a whitewater raft and kayak guide at Zoar Outdoor in Charlemont, Massachusetts. Originally from Hope, Maine, she enjoys outdoor recreation sports, trail running and triathlons.

Aryanna is starting her first year as a Crimson Coach, she started swimming when she was 10 years old and has been part of the Crimson Family for almost 7 years! She plans to move to Florida and study entertainment business at Full Sail University next year.