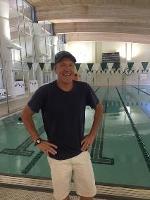 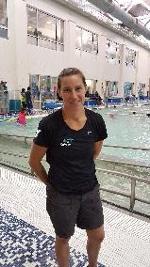 Candy was brought to the SSYMC to coach the master’s team.  She was then brought on board with the Strypers, to develop the young swimmers.  Candy spent over 10 years racing Triathlon professionally. She was the 2002 Xterra World Champion.  Sponsors included Speedo, Saucony, PowerBar, Oakley, Aquaman and Fuji Bikes.

I grew up in Old Saybrook CT where my swimming “career” began around the age of 5 in preschool.  I went to the local YMCA for preschool where I first learned to swim.  It didn’t take long for my parents to enroll me in the “Mini Marlins” swim team program at the Valley Shore YMCA.  I conveniently lived next to a Racquet and Swim Club where I also joined the summer swim team.  I loved competing and improving my technique, and especially loved the social aspect of the sport.  Throughout junior high, I played various sports such as cross country and basketball.  I continued to spend my summers at the Swim and Racquet Club and short course season at the Valley Shore YMCA in CT.  In high school I swam on my high school and YMCA teams and competed in track and field in the spring.  By junior/senior year of high school I knew I wanted to continue swimming in college and started taking some recruiting trips.  I ended up at UCONN where I swam Division 1 for 3 years.  To this day it is still one of the most challenging yet rewarding experiences I’ve had.

I pursued my Master’s in Biomedical Engineering at UCONN and later moved to Providence, RI for a master’s internship for 2 years.  In 2018 I moved to Somerville, MA after accepting a job at Massachusetts General Hospital as a Biomedical/Clinical engineer.  In 2019 I then moved to Quincy with my now fiancé.  Last year I decided to sign up for the 2019 Hyannis Triathlon, where I placed 2nd in my division.  I quickly realized how much I missed training/competing.  I started looking into options for Master’s swim programs soon after, which brought me to South Shore YMCA community!

After spending many years swimming and learning from many amazing coaches, I would love the opportunity to give back and coach.  This would be my first coaching experience, but with my various swimming experiences and work ethic I feel as though I would make a great addition to the team.

Lauren is currently a third-year student at Simmons University pursuing degrees in History and Political Science. I am also a member of the Simmons Swim and Dive Team, where I specialize in sprint freestyle and backstroke. I started swimming when I was 12 with the South Shore Strypers. Over the past five years, I have volunteered with the Mini Strypers and Summer Strypers groups, and have helped coach at both meets and practices. While my 2020-2021 swim season has been canceled, I am thrilled to be back home and working again with the Strypers!

Joseph Young (Coach Joe) has been swimming since the age of 6, placing 2nd in the Illinois State YMCA Championships for the 11-12 50 Breaststroke. Soon after graduating college, he served two seasons as assistant swim coach for Lincoln-Way High School in New Lenox, IL and continued to swim on his own throughout his adult life. An active triathlete, Joe completed his first Ironman (Mont-Tremblant) in 2018 and continues to train as a competitive triathlete and runner at various events and distances. Joe lives in Marshfield with his wife Tara and their two children. His son (Evan) and daughter (Charlotte) have been Strypers for several years at Emilson. Joe has been a choral music teacher since 1991, and has taught high school and fifth grade chorus in the Hingham Public Schools since 2005