Helping your swimmer achieve their goals

Coach George began his swimming career swimming for the Leonia Swim Team in the North Jersey Pool Managers Association conference from 1973-1981. From 1984-1996 he was a swimming instructor, and eventually the Assistant Aquatic Director for the YWCA of Bergen County in Ridgewood, NJ. He became the Girls Varsity Swimming Coach at Paramus Catholic High School in 1994 and the following year started a boys’ team. In 1996 he began coaching at Kittatinny Regional High School in Hampton, NJ as an assistant swimming coach, becoming Head Coach in 1999 where he continues today. In 2004 Coach Soutter founded and coached the Kittatinny Barracudas Swim Team. He began coaching for the Sussex County YMCA Swordfish in 2006 as an age-group coach, and was Head Coach from 2011-2016. He is a certified USA Swimming and ASCA Level 2 coach. Coach Soutter has served the Wallkill Valley Swim Conference as President since 2009. He is married to Debra, and has three children Evan, Christopher, and Hannah.

During his time at Ridgewood, he coached many swimmers to YMCA Nationals and  qualified a swimmer for Junior & Senior Nationals and Olympic trials; attended coaches college in Colorado Springs Olympic center; Coached the NJ Zone team; ran the USS Gold Age Group Camp for NJ Swimming;  was a a board member of the NJ Swimming for many years as coaches representative and registration chairman; and more.

When Ray retired from IBM he became head coach at the Randolf YMCA. While there Ray:

After 10 years, Ray retired from the YMCA and took a part time job as assistant coach responsible for coaching the 11/12s at SHY(Somerset Hills YMCA). While there Ray qualified four(4) 12 year olds for YMCA Nationals,  had the 11/12’s win the team high point at state championships and  coached the boys 11/12 200 medley relay to #1 relay in the United States. 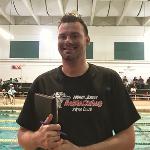 Coach Kevin was involved with the AquaGems (Warwick, NY) for the last 20 years, first as a swimmer, then he spent four seasons as an Assistant Coach, and as Head Coach from 2016-2018. While swimming for AquaGems, he was a multi-time Senior Met and US Sectional Qualifier. In addition to Aqua Gems, Kevin was a standout on the Vernon Township High School team, where he was County Champion in the 500 free and 200 IM. He earned 15th place in the state of New Jersey in the 100 back and was part of the All American 400 free relay that placed second at NJ Meet of Champions earning him All-State honors. After high school Kevin went on to swim for Lebanon Valley College in Annville, PA. While at LVC Kevin broke 13 school records and was named MVP three of his four seasons. He earned multiple medals at his collegiate championship meet all four years specializing in the 400 IM and 1650. Kevin was named Eastern College Athletic Conference (312 member schools) Division 3 swimmer of the week during his Junior year. Kevin lives in Hackettstown, NJ and is a Special Education teacher at a private Special Needs school in Ho-Ho-Kus, NJ.

Coach Christopher Soutter began swimming for the Sussex-Wantage Porpoises when he was 5 years old, before joining the Kittatinny Barracudas when they started up in 2004. He also swam for the Sussex County YMCA Swordfish winter team from 2005-2015 and then for the North Jersey Barracudas from 2016-2018 where he remained an active member athlete of USA Swimming. Chris was also a member of the High Point Regional High School Wildcats from 2011-2015, and was a team Captain his senior year. He swam for Kings College in Wilkes-Barre, PA from 2015-2019 graduating with a BS in Information Technology. He is USA Swimming certified and an American Red Cross Lifeguard. He is employed as an Information Security Associate Analyst at Selective Insurance, Branchville. 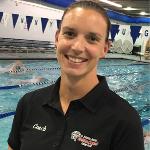 Kristen began club swimming at age 6 and has been in and around pools ever since. A six-year varsity swimmer and school record holder at Watkins Glen Central High (NY) she then went on to swim, hold records and serve as a 3 year team captain at Division I Lafayette College (Easton, PA).  Kristen moved on to her coaching career at D1  Northern Illinois University, where she served as the Graduate Assistant Coach for men and women for 2 years while earning her M.S. Ed. (Sport Management). Kristen spent the bulk of her coaching career building the team from the ground up at George Mason University (Fairfax, VA).  As the assistant coach at GMU, she worked with the team from it’s very first year of existence, helping to build both the men’s and women’s teams to powerhouses in the Colonial Athletic Association, ultimately guiding swimmers to league championships, NCAA Division 1 finals, and USA and international meet finals.  Other coaching credits include various swim camps, the College of Saint Elizabeth (Asst. Director of Athletics) and the last two years as an assistant with the SeaDragons Swim Club. 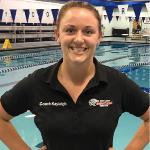 Coach Kayleigh Russell began swimming with the Kittatinny Barracudas in 2004 and finished in 2013. She also swam for the Sussex County YMCA Swordfish winter team from 2011-2013 in both the North Jersey YMCA and NJ/USA Swimming leagues, and was an active member athlete of USA Swimming. Kayleigh was also an important member of the Kittatinny Regional High School Cougars from 2009-2013, where she served as Captain her senior year. She swam for the College of New Jersey Club Team in Trenton, NJ.  She began coaching for the Kittatinny Barracudas in 2015, and is an elementary school teacher in Randolph.

Coach Maggie Hoffman swam for the Newton High School and summer teams, and was the Head Coach of the Lenape Valley Regional High School team for several seasons. She is also an elementary school teacher in Newton.

Coach Jaclyn Bambara was the Assistant Swim Coach of the High Point Regional High School Swim Team since 2014. In 2016, High Point joined forces with Wallkill Valley, as a co-op team, and Jaclyn continued her position as the assistant coach. During the 2017-2018 season, the HPWV Girls Team was honored as the first place team at the Sussex County Swimming Championships and went to the State Sectional Finals. During the 2019-2020 season, Jaclyn will take over the position of Head Coach for the High Point/Wallkill Valley ‘Wildcats’ Swim Team, where she continues to this day. She is also a coach for the Kittatinny Barracudas Swim Team in Augusta, NJ. She is a full-time Speech-Language Pathologist at the Frankford School and the mother of two Barracudas swimmers.

Coach Erica has been swimming since she was a young child. She swam the Kittatinny Barracudas Summer Team from 2004-2007, where she also volunteered to help coach the 6 &Under swimmers. She went on to become a big point-earner for the Kittatinny Regional High School Varsity Swim Team, swimming 100 Fly, 200 Free, and 100 Back earning her varsity letter and being a championships qualifier. While at KRHS, she volunteered as an assistant coach for the Junior High team, and taught swimming lessons in the summers. She swam for the NJ Gators during the 2007-2008 season, and then began coaching with them until the team closed in 2016. Coach Erica was a swim instructor at the Swim Fitness Center from 2007-2010, and has lifeguarded for Crandon Lakes, AquaPro Lifeguards, and Centenary College where she graduated in 2015 with a BA in Graphic Design.