Beth grew up in Geneva, NY. Her life-long love of swimming began at an early age in her backyard pool and she became a competitive swimmer in high school. Through college, Beth worked at a YMCA in Buffalo, NY where her coaching career began. From there she went on to coach in the Northern VA Swim League, and YMCAs in Winston-Salem, NC and Lynchburg, VA. In addition, Beth has started 3 teams – 1 age-group/YMCA team, and 2 high school teams – all in Virginia. Beth’s love for the water has been the motivation for her nearly 20 years of teaching swimming, training lifeguards, and managing aquatic facilities. Beth is also a certified Nutrition and Wellness Consultant through the American Fitness Professionals and Associates. Her husband, Chris, is a teacher and coach at Peddie. The Brights have 2 daughters, Allyn and Delaney. 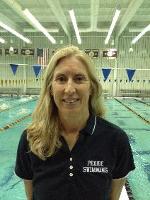 Cathy grew up in Cranbury, NJ, where she started swimming for the Cranbury Catfish at age 7, and continued for 11 years. From the ages of 12-18, she also swam for Princeton Aquatics, a year-round club team that practiced at the old Peddie pool that was up on the main campus near where the science center stands today. After earning a degree in Marine Biology, she worked 17 years for ExxonMobil Corporation in Aquatic Toxicology and later in Quality Assurance. In the spring of 2003, Cathy left the corporate world to join the Peddie Aquatics staff as the Administrator for all the aquatics programs. Since then, she has been deeply committed to the sport and works diligently to help make sure that all PAA families have everything they need to make their swimming experience as positive and productive as possible. Her sons, Connor & Ryan, swam for the club team as well as the Peddie School varsity team, and then went on to swim D1 in college. Cathy lives locally with her husband, John. 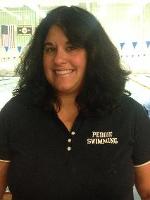 Corina grew up in Ocean County, New Jersey where she swam for Ocean County YMCA Swim Team. Her love of the water began in her back yard swimming pool where she learned the water safety skills that continued throughout her life.  In high school, Corina became a certified lifeguard and she began teaching swimming lessons. In 1989, Corina graduated from Loyola University, and in 2007, she received her Personal Training Certification.  She has taught many types of fitness classes in and out the pool, but prefers aquatic fitness.   As a personal trainer, her focus has been on the benefits & rewards of aquatic physical training.  Teaching Water Safety is a high priority that Corina strives to share with people of all ages, especially children.

Corina joined the staff of Peddie Aquatics in the fall of 2012 as both a water exercise & swim lesson instructor. In the spring of 2015, Corina took her love for the water to the next level and became the "Lesson Coordinator" for the Peddie Swim School. She feels incredibly fortunate to have the opportunity to share her passion with all  Peddie Swim School students and looks forward to a long future at the Peddie Pool.