In his time at PTAC, the team has grown signifincantly in membership.  He has coached countless New Jersey Junior Olympic finalists, including state champions.  He has also coached many North East Zone/Sectional qualifers and finalists.  Over the past two years coach Cava has led>finishes in the country for his age, and this past season he led two swimmers to the USA Swimming SC Junior National Meet.

Miles Cava grew up swimming in the Princeton area for the Eastern Express Swim team where he achieved Top 16 status as an age group swimmer. He would then go>
Cava started his coaching career with the Community Park PASDA team as the 13 and over coach from 2004-2006. Throughout college and from 2009-2010, Cava gained multiple years of experience as an age group coach at the Whitewaters Swimming Team. After Graduation, Coach Miles has worked as the volunteer assistant for the Princeton University Mens Team. Cava has also worked as the Head Coach for the Princeton Area Masters group since 2012. 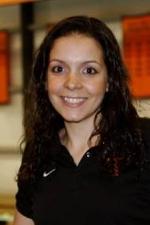 Coach Carolina, an ASCA Level 2 coach, has been>
Coach Carolina swam competitively for 15 years with Santa Cecilia University in Brazil. Carolina immigrated to the United States in 2005 to continue her education. She has extensive experience with various age group training and great skill in evaluating and monitoring the development of young swimmers. Coach Carolina's focus with Tigers Aquatics is to teach proper technique while providing a positive environment for her swimmers that allows them to reach their maximum potential and help them grow as individuals.

Coach Katlyn joined the Tigers in the Spring of 2016 as a coach for the Varsity group. Katlyn began her swimming career at the age of 11 with Lawrenceville Swimming Association (LSA) and Lawrence Lightning. After her time at Lawrence Lightning, she swam for the Notre Dame High School swim team where she was a 4-year letter winner and team captain. After high school, Katlyn continued her swimming career at Rider University where she specialized in sprint freestyle events, highlighted by a second place finish in the 50 free at the 2013 Metro Atlantic Athletic Conference (MAAC) Championships.

Katlyn started her coaching career in 2008 with the LSA. After two-years with her former summer team, she spent the next four years as an assistant coach with Lawrence Lightning.

Katlyn now works as a Manager for Baker Tilly’s Risk and Internal Audit practice in Philadelphia, PA. She currently resides in Ewing, NJ with her dog, Mikey.

Coach Lovette joined PTAC on the Fall/Winter  2017-2018 Season as an Assistant coach for AG3. She began her swimming career competing for Scarlet Aquatic Club. Lovette then went on to swim for Rider University, where she served as the Women's Team Captain her senior year. During her four years at Rider, Lovette was a Metro-Atlantic Athletic Conference top 3 finisher in the 500 free, 1,000 free, and 1,650 free. She was also a team record holder in the 1,650 free and 800 free relay. Lovette continues to swim as a member of the Princeton Area Masters during the summers and began competing in triathlons this past year.

Deb Cherry grew in Rhode Island swimming for the age group team Little Rhody Aquatic Club. The team was just forming when she was nine and had a total of ten swimmers. By the age of 13, she was swimming 11 practices a week on a team of 300 swimmers. Early on Deb placed in the top 3 in the State in Freestyle, Backstroke, and Fly and continued to do so through her age group career. She swam her first 1500 meter Freestyle at age 10, and by 13 was in the top 16 in the country in her age group in the 1500 Free, the 100 and 200 Fly, and the 400 IM. LRAC  dominated almost every year at New England Age Group Championships and New England Seniors. Deb enjoyed the competition, fun, and excitement, as well as the opportunities to work hard in and out of the pool to get faster every season.

Although Deb continued to swim distance freestyle, she began focusing on fly and IM. By the time she was ready to go to college, her best events were the 200 fly and 400 IM. Deb attended The University of Pennsylvania and swam 200 fly and 400 IM for the team. After college, she was offered a coaching position for a high school team and an age group team both of which swam at a Boys and Girls Club. She enjoyed coaching both teams and continued for four years.

At that time, Deb went to graduate school at Penn State University to get a masters degree in Special Education with a specialty in Applied Behavior Analysis. After graduating with an M.Ed., she began teaching high school students with Autism in the State College Area School District for five years and then at the elementary school for three years in State College, PA. After moving to New Jersey, she continued to teach students with various special needs at The Lewis School in Princeton, NJ. From there, she went to Central Bucks East High School in PA where she taught high school students with Autism.

When Deb’s daughter was nine she began swimming for Lawrence Lighting. After a short time, Deb started coaching for PASDA at Ben Franklin Swim Club and then for Community Park  Bluefish. She started coaching for New Jersey Stingrays at that same time and continued for six years, coaching swimmers 14 and under with a primary goal of attending JO’s as a team.

Deb is very excited to be coaching for PTAC and has truly enjoyed the last few months with Tigers. She is looking forward to many great seasons ahead! Go PTAC!!