Denise Salvatore has been coaching at The Atlantic Club since 2010 with over 20 years experience coaching all levels of swimmers. She began coaching shortly after college in North Jersey, coaching for a club team as well as Mount Saint Dominic’s Academy.

Denise began her swimming career at age 10, continued in High School and through college.

Denise has been Senior group coach for the past 8 years prior to that she coached the junior group. Over the past years she has coached numerous swimmers who qualified for Junior Olympics, Senior Champs, Eastern Zone Champs, Eastern Sectionals, and Futures. A majority of her athletes continued to swim at all divisions of collegiate swimming. Denise also is a Master Instructor with NJ SWIM. She is a ASCA Level 3 coach, Open Water Swim Certified. She also maintains certifications in SPIN and Strength & Conditioning. Formerly a Parisi Coach as well.

Her love for coaching and swimming is quite apparent in her presence on deck.

Jenn has had many years of coaching and developing swimmers at The Atlantic Club. Prior to coaching consistently in 2006, Jenn was a swim school director at the Atlantic Club. She has worked with all levels of swimmers from infants to adults, and currently coaches the Senior group.

Jenn grew up swimming in Connecticut, where her HS team (Ridgefield) won their Class M state championships. She was also a YMCA National and Junior National Qualifier. She attended the University of Connecticut and was a two year captain of the women’s team. She was a consistent finalist at the Big East Championships and ECAC Championships in both the 100 and 200 Breaststroke, and the 200/400 IM. Jenn has never stopped swimming. She continues to enjoy both pool and open water swimming in her free time. Her goal is to spread her enthusiasm for swimming on to her athletes. For a sport that is so demanding physically, you have to love it!

Jenn has her BS in Dietetics from UConn, and MS in Nutrition Science from Boston University. In addition to coaching, Jenn works as a Registered Dietitian in Senior Living Facilites. 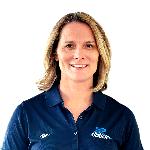 Michele has been coaching at TAC since 2013. She primarily coaches the Prep group, but has been involved with the Riptide Summer Rec team, as well as the Freshman and Junior groups. Prior to coaching at TAC. Michele has experience as an assistant coach, working with age group swimmers at the Westfield YMCA (MA). Michele began swimming at the YMCA/YWCA and USA club level in NJ, where in high school she achieved All-American honors (100 back). She was a Junior National finalist and Senior National qualifier in that event. At Providence College, Michele was a New England champion (200, 500 freestyle) and a Big East finalist. She held school records in the 200 back, 500/1000 freestyle as well as relays. Michele has a BS in Health Policy and Management from Providence College (‘95) and an MS in Occupational Therapy from Springfield College (‘00). She currently works locally as an occupational therapist in the Wall Public School District. Michele is dedicated to sharing her love and knowledge of swimming with swimmers of all ages and abilities. She continues to swim regularly both in the pool and open water.  Both of her children swim in the Senior Group

BA in Psychology from Brown University
Rosa currently works for Monmouth Cty Division of Social Services as a Social Worker
CPR, First Aid, Coaches Safety Training, Lifeguard Training, WSI,* ASCA Level 1
Rosa swam with AAU in NY City, was a swim meet official for 3 years, and has been a coach for over 30 + years,coaching age group as well as adults.
Rosa is currently the NJ Swimming Diversity Chairperson
Rosa teaches adults in her spare time
She continues to swim, and run to stay fit.
Her main motivation in life is “Making a difference"

Kim has worked here at TAC along side of Coach Michele with the Prep kids for 4 years.  As a graduate from Trenton State College with a Bachelores in Elementary Education and Health and Physical Education, Kim was an avid runner and a member of the Track and Field Team all 4 years.  She was a Health and Physical Ed teacher at Jackson Twp for 3 years and an instructor at Devlin Gymnastics for 8 years.  She has participated in numerous marathons such as Boston, Philadelphia and the Jersey Shore, as well as the Lake Geneva Musselman 1/2 Ironman.  She was the winner of the Inaugural Manasquan Turkey Trot.  Kim raised 2 of her 4 children inside the Pool Bubble at TAC, and can't get enough of it!  She has a passion for fitness and health and loves teaching the Prep group swimmers.

Andrew has been coaching at The Atlantic Club since 2018. He has experience in teaching swim lessons, coaching competitive swimming, and instructing junior lifeguards of all ages for over eight years.

Andrew began his swimming career at age 10 on a local summer team, and continued through the USS Club, high school, and at the college levels.

He attended Montclair State University, where he studied Psychology and Child Advocacy. Andrew was a member of the men’s swimming and diving team at Montclair State University, where he was a consistent finalist at the Metropolitan Conference Championship in the 200 Butterfly. Andrew has also competed in many lifeguard tournaments and open water races; finishing Top 10 in the St. Croix Sea Swim.

Andrew holds a Master’s Degree in Clinical Social Work from Monmouth University and currently works as a School Social Worker/Counselor with the Long Branch School District.

Kiara started coaching when she was 16 for her local summer recreation team and has been coaching ever since! She is so excited to coach her first year for The Atlantic Club! Kiara began swimming competitively when she was 7 years old on the Freehold Sharks Summer Swim Team and joined her first winter team at the Woodbridge YMCA when she was 8. At 9, she found her home at the Freehold YMCA's winter swim team, known today as FOBY. Kiara swam all throughout her time at Marlboro High School and was awarded the title of MVP her junior year. She was named captain her junior and senior year. She then continued her swimming career at Ramapo College of New Jersey. Kiara was a top competitor in the Metropolitan Conference and she finaled in both the 100 Backstroke and 200 Backstroke at championships her junior year. Kiara recently graduated with a Bachelor Degree in Art studying Visual Communication Design. > > Kiara's favorite color is purple and favorite animals are sea turtles. She has a dog named Nala and loves everything Disney and Marvel. Kiara (or Kiwi, whichever you want to call her) has a great passion for swimming and can never stay away from the pool for very long. She is so excited for the season and cannot wait to meet everyone! Go Riptide!

Jan has been coaching at TAC Riptide for the last three years. He generally coaches the Juniors but occasionally hops into other practices. He was awarded the prestigious  Most Improved Swimmer  for Colts Neck High School were he swam for four years, two as captain. Jan studied Geosciences at UNCW, and began working as a geophysicist shortly after that for several years before beginning his current endeavor into the field of teaching. He currently teaches Middle and High School Sciences at an alternative school in Tinton Falls for students with various challenges. Jan is currently in Grad School, working towards his Masters Degree in Earth Science and Education. Throughout his teaching career Jan has also been involved in the coaching of a variety of sports and grade levels. Jan spends his summers working as a lifeguard in Spring Lake and has made this an important part of his life.

Kendal was a Business/Economics Major from Lafayette College.  She spent her first year out of college working on Wall St for a Government Securities firm, followed by almost 15 years in Pharmaceutical Sales.  Her high school team, North Penn in Lansdale, PA; in the years she was there, the team was ranked 5th in the nation.  She was a District and State Qualifier in the 500yd Freestyle, recipiant of Most Improved Swimmer her Sophomore year, and a Captain her Senior year and awarded the "Good Athlete Today, Better Citizen Tomorrow" Sportsmanship Award from the school. She swam all four years at Lafayette College, a Division 1 school and was a 3 time ECAC qualifier in the 1650yd Freestyle.  Her junior year she studied abroad in London, England; so she did not complete that season.  She received the Most Improved Swimmer her Freshman year and was a Captain her Senior year.  She currently has 2 swimmers on the Swim Team.

For questions regarding the Swim Team, please contact Kendal