Coach Tyler is an American Swim Association Swim Coach (ASCA). registered swim coach.  He has coached in New Mexico since 2008 for multiple teams and leagues. He began coaching the NM Sundance League for TCA and ACC. He then continued coaching at Charger Aquatics 505 at Sandia pool from September 2012 through July 2014. During his time there he learned from Coach Betsy Patterson.

Growing up in Albuquerque, New Mexico, he began Swimming at age 13 at the Sundance club Midtown Sports and Wellness. Tyler attended Albuquerque High School where he was a 4 year Letterman and Captain of the Albuquerque High Bulldog Swim Team. During that time he also swam USA swimming for the Lobo Swim Club.

Tyler believes that swimming should be as much fun as it is hard work. He encourages the athletes to work well in practice so that when they attend swim meets they can compete at their highest level possible and have fun while racing. While not coaching Tyler enjoys swimming, working out, riding his mountain bike, and spending time camping and being outdoors. 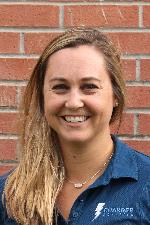 Coach Ashley is an ASCA registered coach.  Ashley grew up swimming at the Sandia pool for Duke City Aquatics with Charger 505 founding coach (and mom) Besty Patterson.  After following in her mother's footsteps and graduating from LSU, Ashley continued to coach and teach swimming in Manhattan, Dallas, Austin and eventually back home in Albuquerque.

Ashley began coaching with Charger 505 in the fall of 2014 after the passing of her mother, Betsy Patterson.  Ashley currently serves as Charger 505 executive director and a Blue and Silver Team Coach.  Coach Ashley hopes to develop her young athletes into lifelong swimmers by encouraging proper technique, positive attitudes and sportsmanship.

Outside the pool, Ashley spends time with her husband Taylor and their children, Adair, Henry, and Grant.

Coach Jordan is an Albuquerque native who grew up swimming competitively at Sandia pool for Duke City Aquatics with Charger 505 founding coach Betsy Patterson. After finshing her swimming career Jordan contiuned to be an active member in the sport and began teaching and coaching swimming to the Albuquerque community.

Jordan began coaching at Charger 505 in the Fall of 2014 and continues to stive to develope athletes for a life-long careeer in swimming. Coach Jordan currently serves as a Charger 505 Blue and Silver Team Coach.

Her fun and energetic personality keeps her athletes engaged and learning during practice.

Jordan holds a United States Swimming Coach Membership and is a current member of the American Swim Coach Association (ASCA). She also holds a Bachelors degree in biology with a minor in psychology from UNM.