The 2020 season marks Coach Carter’s 3rd year with the CAC program. He has a true passion for coaching and has been on the pool deck for over 30 years! Locally, Coach Carter had an extended stint with M.E. Lyons YMCA / Anderson Barracudas where his primary focus was the 11-12 age group. Coach Carter swam at the University of Kentucky and Boston University.

Carter brings a wealth of experience and knowledge to our pool deck and has one objective each season: getting the swimmers to believe in themselves. “When that happens, I know a great foundation for growth (in and out of the pool) is built.”

Coach Carter was drawn to work with CAC because the entire coaching staff is as dedicated to the swimmers’ personal growth as much as their development in swimming. “Because of this dedication to the person, our swimmers are in a better position to succeed.”

In addition to work and swimming, he loves to travel with his wife, Stephanie, and daughter, Annie. He also likes to play golf and tennis.

Jessi has been involved with swimming since she was 9 years old. She grew up swimming with Greater Columbus Swim Team of Ohio and Dynamo Swim Team. In highschool, she was an All American in 100 butterfly, 100 backstroke, & 100 freestyle. Jessi continued swimming in college at Bowling Green State University for 2 years and transferred to the University of Cincinnati to complete her degree in Early Childhood Education.

Jessi’s coaching career began when she was 17 years old with a summer league team in Columbus. She continued coaching through college with Bowling Green Swim Club. After graduating college, she was the head coach for the Montgomery Makos and the Head Satellite Coach for the Cincinnati Marlins. She began coaching for the Marlins in 2015. She has worked with a variety of ages ranging from 4-18. Jessi is most experienced coaching the 14 & under age groups. She has coached numerous JO & Zone Qualifiers who have been individual & relay champions. Many of the swimmers she has coached have gone on to become NCSA, Sectional, ISCA, & Futures Qualifiers.

Her goal as a coach is to coach the whole athlete to be the best they can be in and out of water. She is very passionate about teaching proper technique and believe that swimming pretty and correctly comes before the speed. Jessi & her husband, Alex are parents to 4 energetic boys (Noah, Xander, Grayson, & Cooper). She enjoys watching Ohio State Football & collecting Rae Dunn mugs! 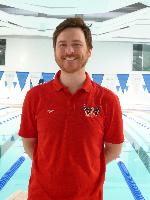 Coach Ben was a Seahawk swimmer for 10 years and has been coaching with the CAC program since 2004. That's almost a quarter-century of red and black pride! Ben was a Junior Olympic-level swimmer as an age-grouper, and finalist in multiple events at Ohio Senior Championships during his high school career. At 14, he was a member of the 1994 CNCA National Championship team.

He has coached at every level in the CAC program and is entering his 5th year leading the A3 training group. Coach Ben enjoys coming up with new and creative ways of teaching technique, skills, and habits. He challenges and motivates all A3 swimmers in different ways to reach their potential as they build a strong foundation for a long swimming career. Coach Ben is passionate about developing young swimmers into great people and enjoys watching our athletes succeed at each stage of the program.

Clark has coached dozens of swimmers to their first Junior Olympic or Zone qualifying times, and the A3 group has continued to be a key component to CAC Age Group Championship teams under his leadership. His groups have produced several Ohio JO top-8 finishers, as well as relay depth in the 10 & under age groups.  The success of the group over the last year led to Coach Ben being nominated for the Ohio Age Group Coach of the Year award in 2016.

Ben and his wife Megan, also a former Seahawk swimmer, have two children and live in Loveland. Maren will turn 3 this season, Maxwell is 9 months, and both keep Coach Ben busy outside the pool. In addition to his coaching responsibilities, Clark enjoys creating CAC team apparel, current events, and is a huge college football fan.

He is a graduate of Saint Xavier High School, Ohio University, and Xavier University.

Sheridan grew up surrounded by swimming having both her parents coaching and began swimming at 9 at LTPY. She swam for LTPY until her senior year when she swam for GCSTO. She also swam for her high school, Village Academy, and placed 2nd at the state meet her senior year in 100 butterfly and 8th in 100 free.

She began coaching in 2018. She started as an assistant coach on a summer league team, Pickerington Tiger Sharks, for a year and then moved to the head coach position for the last 2 years. She coached last winter season (2019-2020) with GCSTO. She is excited for her first season with CAC!

Sheridan graduated from Village Academy in 2017. She attended Ohio State University for 3 years and recently transferred to University of Cincinnati with a major in Art Education. 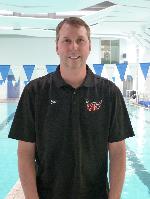 Ken has been with CAC for nearly two decades.  Ken currently helps coach our Train 2 group of senior level athletes.  His area of expertise is technique.  Ken loves to give individual feedback to swimmers and fine tune their mechanics.    He was named Ohio Swimming’s Age Group Coach of the Year in July 2006.
Ken’s swimming career includes 10 years with Foxcatcher Swim Club and 4 years with Germantown Academy under the legendary coach Dick Shoulberg. After gaining All- American honors, Ken then swam 4 years for the University of Virginia where he earned his Masters in Teaching. In 1992 Ken was ranked 23rd in the World Rankings in the 200 Meter Butterfly and finished 2nd at the US Nationals. He was an Olympic Trials Qualifier in both the 200 Meter Butterfly and the 400 Meter Freestyle.

After growing up near Seattle, Washington, Mariah moved to Gambier, Ohio to attend and swim for Kenyon College in 2012. While at Kenyon, she specialized in distance events, competed in four D3 NCAA championship meets, and was a 15 time NCAA All-American. After graduation Mariah moved to Cincinnati to begin a career in finance, completing her MBA at the University of Cincinnati.
Mariah has been coaching swimmers across various age groups and levels for the past 10 years. Her ultimate goal as a coach is to help kids learn to love the sport of swimming, even during the early mornings and tough practices. She’s excited to join the CAC team this year, and looks forward to meeting all of you!

Ryan has been responsible for swimmers and programs that have developed Junior Olympic champions, developmental swimmers and everywhere in between, and got the chance to assist with National-level athletes competing at Olympic Trials and Junior Nationals.

Ryan's philosophy is every athlete deserves attention, whether it's video feedback on stroke technique or individual conversations about goal-setting, etc.

Away from the pool, he enjoys traveling (hopefully back to Europe soon) and competing with Coach Kevin in fantasy baseball.