Brent Ransom was born and raised in Chicago, IL , and is the son of William and Daniella Ransom. He attended and swam for Kenwood Academy High School where he excelled in swimming and track. Following high school he attended the University of Toledo where he studied communications with a focus in Radio and Television Broadcasting. He swam for the Rocket swim team. While swimming at UT he began swimming summers for GTAC(Greater Toledo Swim Club) and eventually helped coach and manage the 13-18 age group from 1998-2002 under then head coaches Chris Wolford and Keith Kennedy.

From 2010 until now, he has been an assistant coach for Xavier University Men’s and Women’s swim team. Among his coaching responsibilities, he planned daily practices for the sprint and distance programs, he helped swimmers develop stroke technique and race strategies for competition, and he coordinated the strength building program for the athletes.

Coach Ransom stated, “I am very excited for this opportunity to lead such a prestigious team. The rich history of the  Greater Toledo Aquatic Club  is something that I appreciate and respect. I’m looking to follow in the footsteps of great former coaches that have lead this program from prior years like Ann Urshel, Chris Wolford, and Keith Kennedy.  My hope is not only to see wonderful things done inside of the pool, but also prepare them for the years to come outside of the pool. The goal is to be the best as soon as possible and to hold onto the great historic tradition that has been here for many, many years.” 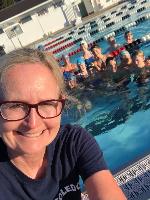 Brigid Burke has been coaching swimming since 1993.  She has been with GTAC since 2011.  She has coached novice, intermediate, and advanced swimmers for YMCA and USA swim clubs in Illinois, Ohio, Pennsylvania, and France, as well as a summer league in Virginia. She has coached YMCA district and state champions, and national qualifiers; Junior Olympic state champions and top ten swimmers; Zone qualifiers and champions, Junior National qualifiers; an Olympic Trial qualifier; and a USMS national champion.  Two 10 year-old GTAC swimmers broke Ohio records in the 200m backstroke and 200m butterfly under her coaching.  Brigid has been invited to coach at several elite USA swimming camps and was the 11-12 Zone coach for Team Illinois in 1997. Her main goal in coaching swimmers is to help them improve their technique and aid them to develop more self-confidence so they can get faster times.  She also hopes to teach swimmers that swimming can be a life-long sport that always keeps a person healthy in spirit and mind.  Her children swim for GTAC and her husband is an Ohio swimming official.