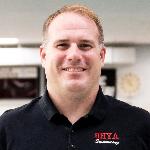 This will be Sean Carroll's sixth year of coaching with Oak Hills. Under Sean's leadership, swimmers have gone from learning correct stroke technique to competing at J.O. Championships and the Central Zone Championships. He is an excellent motivator and the swimmers look forward to being a part of our team.!

A native of Cincinnati's west side, Sean began swimming shortly after he learned to walk!  His mother was his first coach at the Delhi Swim Club.  Later, Sean swam for Gamble Nippert YMCA and Elder High School.  Specializing in sprinting, Sean competed in the 2003 YMCA Nationals. 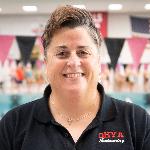 Laura grew up on the west side and began swimming at age 6 with Oak Hills Swim and Racquet Club.  She joined the Cincinnati Pepsi Marlins and continued swimming with the team through high school, as well as with OHSRC, Gamble Nippert YMCA, and Oak Hills High School.  Laura was the PPSL Champion in the 100 Breastroke, 2-time State Qualifier, a member of the OHHS State Runner-up Team in 1991, and a member of the 1994 Ohio University MAC Championship Team.

Laura returned to coaching in 2011 at Oak Hills High School as the Freshman Assistant Softball Coach and was the head coach of the Middle School team in 2012.  She also returned to Oak Hills Swim and Racquet Club the summer of 2012 as co-head coach. Laura currently teaches Physical Education and Art for grades K-8 at St. Nicholas Academy.  OHYA is fortunate to experience Laura's passion and positive influence in the lives of youth!.

The 2019-2020 Short Course Season is Coach Lauren’s (aka Coach Bus) first year coaching with OHYA. She knows swimming very well because she has been swimming since she was 5 years old. Lauren started swimming at Oak Hills Swim and Racquet Club and swam until she finished high school at Mother of Mercy. She primarily swam freestyle, breaststroke, and IM. Lauren received the title of Honorable Mention at the Greater Girls Catholic League sophomore year on a relay.

Lauren is currently enrolled at the University of Cincinnati studying Occupational Therapy. She hopes to work with kids some day at Cincinnati Children’s Hospital Medical Center!