John Bishop has been a part of SPYNATION family for 37 plus years (12 years as a swimmer, and 26 years as a coach). In the Fall of 2013, John Bishop became the Head Coach of our SPY Swim Team.. John has been thrilled to contribute so much to our competitive program which has been highly recognized in YMCA and USA Swimming. He has worked with all levels of swimmers, from National champions, State champions, all the way to beginners just learning the passion of swimming. He has worked with kids who have achieved Olympic trials, Senior National (USA), Junior National (USA), YMCA Nationals, Zone, AA, and A levels!  John has encouraged kids to be leaders. Before 2013, he was the Lead  8 and Under Age Group Coach and served as Assistant Coach with all other groups. John had the privilege to work in coordination with the SPY Team’s past Head Coaches, Larry Figgins, Dave Johnson, and Bruce Patmos,  to develop and enhance our Y’s competitive swim program.   He has been recognized as the Southwest Ohio YMCA Swim League's "Coach of the Year" in both 2000 and 2016. During the 2002-03 season, has been inducted to the Southwest Ohio YMCA Swim League's Hall of Fame as an athlete and coach. While coaching Springfield North High School was voted  the "WOL Coach of the Year".  John is motivated to developing and getting the best out of each athlete.

Mickey McNeil has been an Age Group Swim Coach since the Fall of 1991 for the Springfield Family YMCA Swim Team (SPY) in Springfield, Ohio. Previously, she had coached local summer swim club teams from 1982-88 and 91-92. She was a volunteer swim coach for Kenton Ridge High School between 1997-98 and 2008-2012. Currently, she continues as an Assistant High School Coach with Head Coach Heather Shaffer for both Kenton Ridge and Northeastern High Schools since 2014. With her background of education, experiences, trainings, and enthusiasm, she is driven to assist SPY swimmers to achieve great things. Over the years, she has attended various clinics and seminars to enhance her coaching. Though her position at SPY is regarded as a part-time employment, anyone would tell you that her coaching is a fulltime passion and dedication. The coaches of the Southwest Ohio YMCA Swim League have voted her for the “Coach of the Year” award in 2002, 2010, and 2011. In 2016, Mickey was inducted into the Southwest Ohio YMCA Swim League's Hall of Fame as a coach. In 2019, she was selected as one of the top ten finalist for the Fitter and Faster Swim Cap Tour’s Age Group Coach of the Year and recognized at the 2019 ASCA World’s Swim Clinic’s Awards banquet in Dallas, Texas.

As an age group coach, she has had the privilege to work in coordination with the SPY Team’s past and present Head Coaches (Larry Figgins, Dave Johnson, Bruce Patmos, and John Bishop) to develop and enhance the Y’s competitive swim program. Each swim season has provided thrilling opportunities with the SPY Coaching Staff to develop young athletes at various levels of success. She embraces the way that the SPY program deeply weaves in the YMCA Values of Caring, Respect, Honesty, and Responsibility for the child’s development with that need for Fun and Joy in swimming. The SPY Swim Team takes pride in our strong alumni group who give back and support to our young athletes.

Mickey along with her brothers and sister first started competitive swimming for the Springfield Pepsi AAU Team before joining the Springfield Family Y Swim. After high school graduation in 1982, she attended Miami University of Ohio where she earned her Bachelor of Science in Education in Physical Education. She taught in the Cincinnati area for a couple of years. In 1993, Mickey expanded her education and career opportunities by attending Central Ohio School of Massage for Therapeutic Massage Education. In 1995, she graduated and became an Ohio Licensed Massage Therapist. At this time, she is a self-employed therapist and therapist for the Cincinnati Reds Baseball Team.

Mickey’s love for coaching is fueled by understanding that a sport like swimming is continuous work, and an on-going process…there is always some aspect to develop, improve, enhance, learn, and enjoy. Yet, the most empowering part of swimming is witnessing kids become Responsible, Caring, Respectful, and Honest individuals with the fire to be competitive athletes. 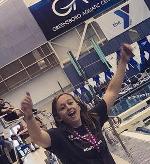 Morgan joined our 2016-17 Coaching Staff. She has a bundle of competitive swimming experience to bring to our SPYNATION. For the 2016, 2017 and 2018 summers, she was an Assistant Coach for the Idle Hour Swim Club Team in Beavercreek, Ohio. The team of 100 summer swimmers and four coaches were the 2016, 2017, and 2018 Southern Ohio Swim League Champions.

Morgan has been competitively swimming since the age of 11 years old. She started swimming at the Beavercreek YMCA; then upon its’ closure, her family continued their YMCA competitive swimming at the Coffman Family YMCA. She participated at the YMCA Long Course National Championships in 2013 and 2014. As an age grouper, she swam in seven Great Lake Zone Y Championships. Most impressive achievement is her Coffman Family Y Swim Team Record for the 4 Kilometer Open Water time of 57:08.

Morgan recently graduated from Wittenberg University in May of 2019 with a Bachelor's of Arts degree in Sports Management, along with minors in Business and Sociology. She was on the varsity swim team all 4 years while attending Wittenberg where she was the team captain for her junior and senior years. Morgan made dean's list several semesters. She also made several service trips with the Fuller Center for Housing while attending Wittenberg.

Morgan is currently a Logistics Specialist at Wright-Patterson Air Force Base in Dayton, Oh. She started at Wright-Patt in May of 2019. She is also the assistant swim team coach for Carroll High School in Dayton, Oh, starting for the 2019-2020 school year. 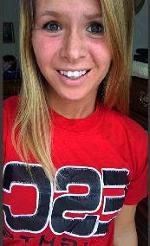 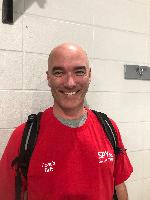