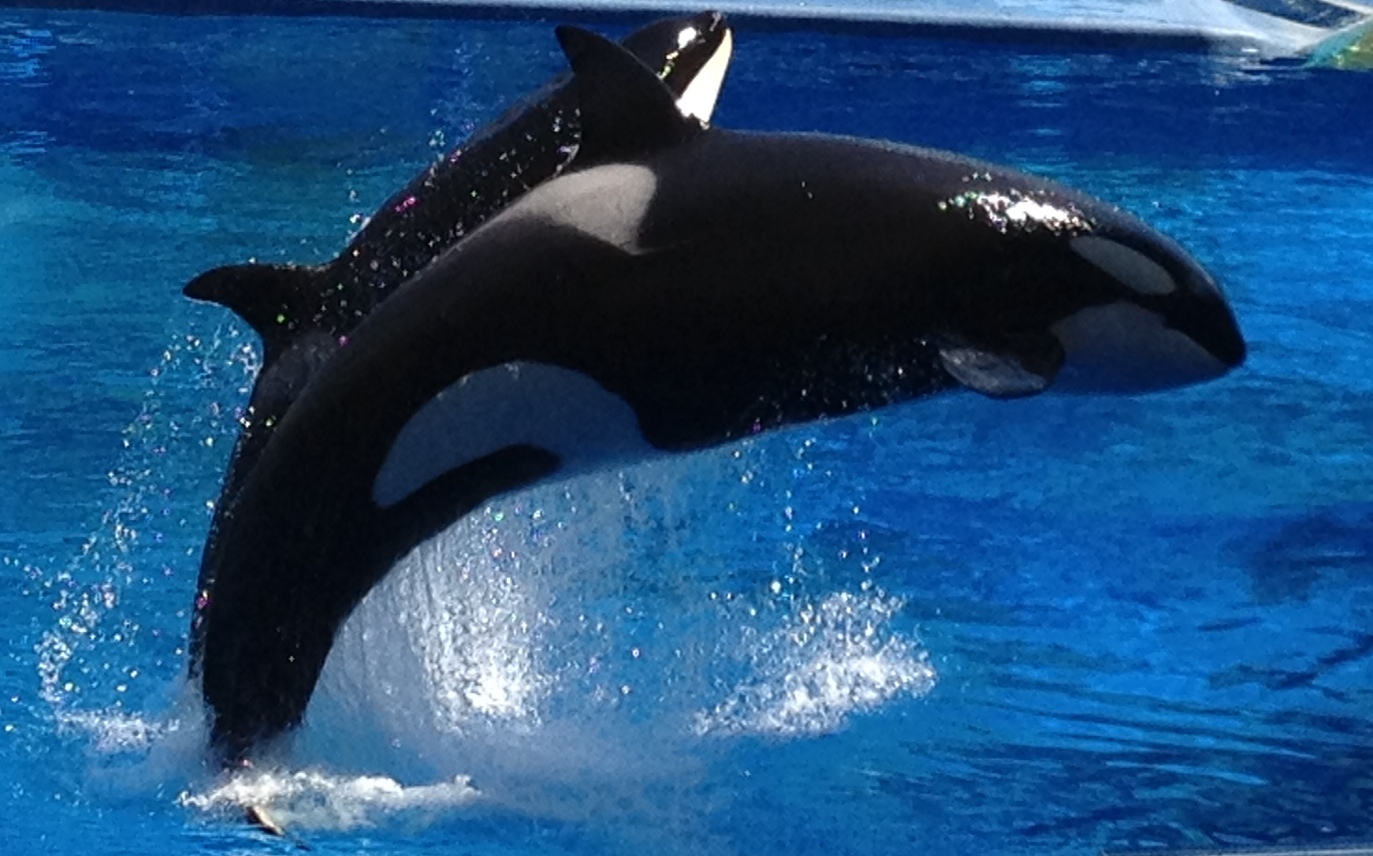 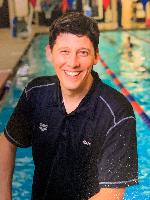 Matthew Crum has over 20 years competitive swimming experience. He started racing at 5 years old in Peninsula pool, then swam for the Portland Parks Swim Team (now PAC).  During high school he joined the Multnomah Athletic Club swim team and completed his racing career at Wheaton College. A passion for the water and competitive swimming; Matt can always be found close to the pool. After college Matt coached the South Salem Saxons for two years, coached the Oregon City High School team for three years and has been coaching the club team since 2007.

At the pool Matt works to help each competitor reach his or her personal potential.  He brings a challenging yet compassionate and caring approach to coaching and works to build confident and thoughtful athletes. 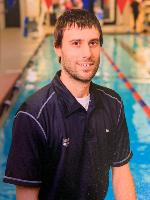 With over 20 years of competitive swimming experience as an athlete and as a coach, Ben Talbott mixes a passion for the water with a passion to excel. He started swimming competitively with David Douglas Swim Club (now Mt. Hood Aquatics) at a later age than normal, 13, but it was clear he was a natural as he quickly moved his way up to the senior squad. He began his coaching career right out of high school and has been coaching ever since. Over the past 15 years, he has coached for David Douglas Masters, Eastside Water Polo Club, Gresham High School Swimming and Water Polo, Parkrose High School Water Polo, as well as his current position as Head Age-Group Coach for the Oregon City Swim Team.

Although his competitive expectations are always very high, his coaching philosophy really revolves around the concept that athletics, especially swimming, should be as much about fun as it is about valuable life experiences.

Bryan Watt began swimming competitively in 1972 for the Oregon City Swim Club and has been in the water ever since. During his high school years, he swam for Oregon City High School and then went on to swim all four years during his time at Oregon State University, graduating in 1987. Upon graduation from OSU Bryan earned not only a degree, but also a commission in the United States Air Force where he spent 20+ years flying cool airplanes, while managing to keep in shape swimming through the years. While in the Air Force, he got the chance to command a squadron whose winning ways went beyond the everyday Air Force experience. Physical fitness has always been a top priority for Bryan, and that is one of the ways in which he led his squadron...winning not only in the air, but also on the field and in the pool, where he competed in several team triathlons and other events.

In 2009 Bryan joined several other masters swimmers at the Oregon City Swimming Pool and began getting back into competition shape. He competed in the 2010 Oregon Masters Swimming Association Championship Meet, and in 2011 decided that Oregon City ought to have a masters swimming team. He established the team in 2011 under the auspices of the Oregon City Swim Team, and is currently the assistant coach. Shortly after establishing the Masters team, Bryan decided to approach OCST and see if they could use his talents to bring up the next generation of younger swimmers…and they said yes! Not too long after that, he also became the head coach of the Oregon City High School Swimming Team, a position he still holds to date. While coaching at OCHS, Bryan has put together a winning team that has produced several state champions including the first-ever Oregon City High School state champion relay team for swimming.

All five of Bryan and wife Shannon’s progeny are swimming on the Oregon City Swim Team. Swimming for Bryan has become not only a way to stay physically fit, but also a strategy to make sure he is around to encourage his children, grandchildren (and beyond) in the ways of his faith and addiction to chlorine! 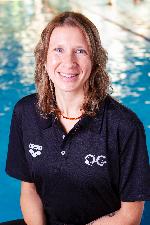 Hello, my name is Rachael Sokol. Like many of you, swimming has been a passion for me. I have been immersed in the swimworld since I was 6 years old. I swam competitively until I was 17. I thought that I was going to work my way to my Olympic dreams, but that dream was cut short. Due to multiple knee surgeries, I had to stop swimming. You know the saying, once a swimmer, always a swimmer. I went straight from in the water, to coaching on deck. I assisted my coach throughout the rest of high school, and throughout my college years. After college I left the swimworld due to work, and having a family of my own. Once my kids were older, and on a swim team, my passion for swimming returned full force. I was an assistant coach, with the North Clackamas Aquatic Park team, Piranhas, for 4 years, and have been with the Cavs Highschool swim team for 3 seasons. And now, I’m incredibly happy to be with Oregon City Swim Team.
Since the end of July 2018, I have had the wonderful opportunity of getting to know the OC swimmers. I am eager to continue to help them grow as swimmers, as well as individuals. As my favorite fish says, "just keep swimming"! 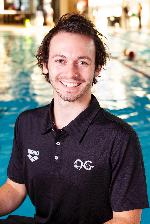 Josh Morton swam with OCST for 7 years before he decided he wanted to be on deck. During his time in the pool he earned himself multiple district and state titles, as well as a state record. He went to Age Group, and Senior Sectionals with OCST. Josh was also awarded one of Oregon’s Top 5 Swimmers. Some awards he is most proud of during his time on the Oregon City High School Swim Team are MVP, Most Inspirational, and best shirt. Josh has also been coaching the Oregon City High School Swim Team for 3 years now. 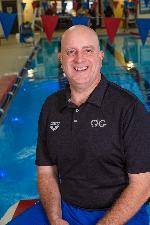 Before joining the staff at OCST, Al Capron was as an assistant coach with the Linfield College swim team, working under Head Coach Kyle Kimball from 2015-2018. During this time, the Linfield swimmers established 90 new school records. Al, an ASCA level 3 and USMS level 3 coach, has been coaching swimmers of all ages since 1992. A technique-driven coach with experience coaching at the NCAA Division I level, Al has developed age-group champions at the Regional and Zone level, and coached swimmers that achieved Junior National qualifying times as well as multiple Masters-level national and world masters record holders. He previously coached at the University of Washington, Bellevue Club Swim Team, and Lake Oswego Swim Club. Al likes to use underwater video to analyze swimming technique and is eager to help swimmers improve the way they move through the water. Al was a four-year varsity swimmer competing on the University of Washington Swim Team. Al swam distance Freestyle and Butterfly in college and was a member of the Pac-10 team from Washington from 1988-1992. Al enjoys playing guitar and swimming in his spare time. 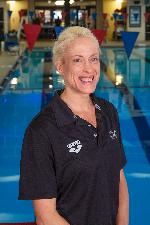 Kristi Golgotiu is so excited to be an assistant coach for Oregon City Swim Team! As a mom of three amazing athletes, she has volunteered in their various sports explorations and loved every minute.

Her personal background is full of sports including soccer, volleyball, track & field, cross country, but her swimming started with ocean lifeguarding. In college, Kirsti swam with the Pepperdine University Women’s Swim Team (Div I), with her favorite being fly and free sprints.

She brings her sports experience with her when assisting OCST kids of all ages and skill levels, knowing that it is never too late to become a competitive swimmer regardless of your initial ability. It just takes a developing feel of the water, and a healthy dose of GRIT.

Kristi now swims with the fun Oregon City Tankers Masters Team so that she can better relate to the kids workouts, challenges, and successes more personally. With all three of her kids joining the swim team and taking off with their own swim achievements, and her husband being their biggest supporter, the Golgotiu family has truly become a “swim family.” 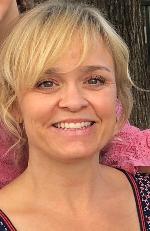 Amber Craver swam competitively from the age of eight in Illinois and Texas and then in college, Division III, at Springfield College in Massachusetts. She taught swim lessons through high school and college summers. After graduating college Amber left the swimming world for work in the medical field and to start a family. Now that all three of her daughters share the same love of water as she did, she's looking forward to assisting the coaches with Oregon City’s younger swimmers in stroke development, time management and getting the most fun and work out of each practice. Being able to swim, be part of a team, and reach goals are lifelong lessons that will stick with our kids. And being part of Oregon City Swim team has been a beacon of light for the Craver family in their move from Texas to Oregon.

Tim Waud has been involved with the Oregon City Swim Team as a coach and athlete since 1977. His coaching career began as a student athlete at the University of Oregon. Tim was very involved in the University of Oregon Swim Camps from 1987-1990. Working with Dr. Don Van Rossen in 1987, Tim created the U of O Club Sport Swim Team as a coach and athlete. In 1991, Tim was a coach/counselor at the Stanford University Swim Camp working with NCAA Division I National Championship and U. S. Olympic Team Head Coaches. In 1991, Oregon City Swim Team hired Tim as an Age-Group Coach. Tim continued to coach both USA Swimming and the Oregon City High School Swim Team through 1997. Tim has been an ASCA Level I & II Age Group coach since 1991.

Tim truly believes that “Swimming is for Life.” His passion for the sport of swimming carries into every aspect of the sport. It is his hope that swimmers will find their niche in the sport and continue swimming for a lifetime. “Swimming has been very good to me, it has made me the person I am today. The sport of swimming breeds intelligence, self-confidence, pride and a very strong work ethic which will continue for a lifetime.” Tim hopes he can share his experience and knowledge to develop swimmers of every age and ability.