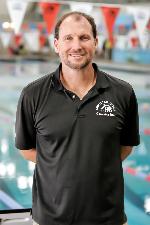 Rick came to the Corvallis Aquatic Team in September of 1990 with a master’s degree in exercise physiology from the University of Northern Colorado and a bachelor’s degree in psychology from Willamette University. He swam competitively for 10 years and has been coaching swimmers since 1987.

Rick began coaching for the Hickam Hurricanes in Honolulu, Hawaii. After a year in Hawaii, he moved to the University of Northern Colorado to work on his master’s and gain collegiate coaching experience with their women’s varsity swim team. Upon completing his degree in December 1989, he moved to the Las Vegas Gold Swim Team in Nevada. There he served as assistant coach in charge of the developmental team and team recruiting. Rick has been a licensed massage technician since April 1994. In his life beyond swimming, Rick enjoys family adventures with his wife and two boys along with surfing, skiing, and paddle boarding. 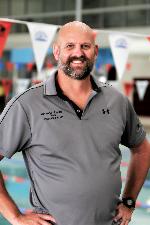 Greg moved to Corvallis in 1996 to work on a Masters degree in Oceanography.  He has a bachelor’s degree in secondary science education from the University of Northern Colorado.

Greg began coaching a summer club team in 1988 in Cortez, Colorado.  From 1990 to 1995 he was head coach of a year round program in Eaton, Colorado.  He joined the CAT coaching staff in the fall of 1998 and began working with the Novice and Junior IA groups.  In addition to his duties as CAT's Age Group Coach, he currently coaches the Junior 1B and Junior 2 groups.  During his time with CAT Greg has completed parts 1 and 2 of the National Age Group coaches college through USA swimming and level 2 and 3 through the American Swim Coaches Association.

Chloe is originally from Bend, Oregon, but moved to Corvallis in 2010 to attain a bachelor’s degree in Mathematics from Oregon State University.

Chloe began teaching swim lessons in Bend back in 2009 and has been teaching ever sense.  She worked at Osborn Aquatic Center from 2012 - 2016, holding various positions including Assistant Program Coordinator for the swim lesson program, Administrative Assistant, and several others.  Throughout College, she also interned several times for an organization called Camp Adventure Youth Services which contracts with the Department of Defense to provides various services to United States Military children and youth abroad.  She has directed aquatics programs in Spain, mainland Japan, and Okinawa.