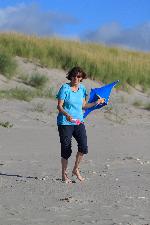 Shelly grew up in Seattle and swam for Cascade Swim Club and the University of Washington Huskies .  She is married to Dan (a Husky Swimmer also) and has four children who all competed for the HRVST through the years - Justine, Brett, Jacob and Mariah.

Shelly has 10 years swimming experience and 30 years swim coaching experience in a variety of settings.  She came to the HRVST in 1996 and has been head coach since spring 2000. In that time she has coached swimmers at all State, Regional and National levels, including coaching Scott Bergstrom (200 fly) at the Olympic Trials in 2012.  She started assisting Oregon Swimming by participating on the Board of Review and by helping to coach the All Star and Zone teams.   She was the Oregon Swim Coaches Association Chair from 2011 to 2014, the Senior Chair for Oregon Swimming 2016-2017 and currently is a member of USA Swimming's LSC Development Committee and General Chair for Oregon Swimming.  In 2009 Shelly was awarded the USA Swimming ConocoPhillips Outstanding Service Award for Oregon, and the Oregon Swimming Coaching Excellence Award. At Convention in 2017 she was awarded the Kerry O'Brien Masters Coaching Award.

Swimming is different to many local youth sports since our coaches are professional coaches on a salary.  We take pride in the fact that our team provides funding for continuing education for all our coaches to keep them up to date on current coaching practices.

Growing up in southern California, Mary Jane (MJ) Caswell enjoyed swimming competitively both as an age group participant and at the high school level.

While competing for the University of California at Irvine, MJ had the opportunity to teach swimming to all age group levels in addition to conducting introductory classes in competitive swimming.

Currently MJ and her husband Michael, enjoy training and competing for the Columbia Gorge Masters Swim Team. MJ especially enjoys the camaraderie and support of  both the Masters’ group and the local aquatic community.  Her favorite events are the 200 and 500 freestyle and the 100 butterfly, which were the shortest events she swam in college.  Mj started coaching for the HRVST in 2006, where she enjoys working with the kids (and masters swimmers) and passing on her knowledge of the sport.

Ann has been a longtime masters swimmer with the CGM. She took the masters coaches certification class in May 2016, and started coaching with our team this summer. She currently coaches twice per week, sharing her love of the sport with her teammates.

Keith Ebbert calls the Gorge home having lived in Carson, Underwood, White Salmon and Hood River in his formidable years. Keith began his swimming career in the White Salmon municipal pool, we all know and love, and his first competative meet and disqualification was performed at The Dalles Invitational in 1983. His 15 year long swimming career took him to the University of Nebraska-Lincoln on a swimming scholarship where he received both his BA in International Business and a Master of Community and Regional Planning. Keith has three young sons, Charlie and Cassidy and Casey Ryder.

Keith's best events were the 100 Butterfly and the 200 Individual Medley. His senior year in High School he broke the Oregon state records in each of these events, but came in second in the 200 I.M. As a collegiate athlete he participated at the NCAA meet in both of these events and qualified for the 2000 Olympic Trials in the 100 Butterfly. Keith has trained and competed against a number of well known Olympians including World Record Holders and Gold Medalists like Penny Haynes, Peter Jackson, and Adam Pine. Keith joined our team in 2010 as an assistant coach, took a break for a few years and now is excited to be part of the Hood River Columbia Gorge Masters program again and can't wait for them to "experience the burn."

Bekah has been assisting us with our team for the last year as an assistant coach in the summer, and filling in as needed during the course of the school year.  We are very fortunate to have her working with our swimmers.  She grew up in Hood River, and went to college at George Fox University where she received her teaching credentials.  She teaches 2nd grade in a bi-lingual classroom at Mid Valley Elementary School in Odell.   She loves her littles!