Erik has been the Head Coach of the Rec Plex Sharks since 2006.  Prior to that, he was the Head Developmental Coach at Parkway Swim Club from 1999-2006.

He has coached many phenomenal swimmers over the years who have qualified for Olympic Trials, Nationals, Junior Nationals. He has also coached swimmers who have become Sectionals Champions, Ozark Champions and MSHSAA Champions.

Erik has a BA in Video Production from San Francisco State University.  During his free time he likes reading and cooking. He is married to wife, Debbie and they have one son, Cole 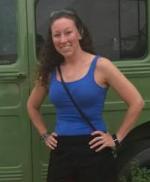 Keri has been coaching the Sharks since 2009 and prior to that, swam for the Sharks for7 years!!

Keri has coached a plethora of swimmers who have gone on to prosper in college and she also enjoys spending time each summer as a Counselor/Coach at the University of Texas- Austin- Longhorns Swim Camp.  She loves distance swimming (500 free) and enjoys teaching Breaststroke technique.

Education: Bachelor of Science in Family and Consumer Sciences from Southeast Missouri State University
Masters of Science in Curriculum and Instruction with a Minor of inclusive classrooms from Concordia University- Portland