Jim began coaching Westerville Aquatic Club in the fall of 1977 as an age group coach assisting then head coach, John Bruce. After completing his graduate work in adapted physical education he took over the head coaching position in 1985. He took over operation of the club in 1992. Since that time he has been voted Ohio Swimming’s Senior Coach of the Year three times, recognized most recently in 2009. He was awarded the 2008 Ohio High School Swim Coaches Association’s Sportsmanship and Ethics Award given annually to one coach that exhibits these traits in an exemplary fashion. Over the years Jim has coached swimmers to state and national championships where many have won titles in their respective events. In the recent past he has had two back to back state record setters in Austin Staab and Kate McNeilis. Austin was voted Ohio High School Swimmer of the Year in 2006 and 2007 and was awarded National High School Swimmer of the year after setting the national record in the 100 Butterfly in 2007.  Staab is the current American Record holder in the 100 Butterfly.

As the Program Director of Central Ohio SwimAmerica Jim is serving more than 5000 children, adults and special needs individuals.    He has been a featured speaker four times at the National SwimAmerica Conference and spoke at the 2008 US Swimming’s Build a Pool Conference to share the success of his program. He started the first Special Olympics program for swimming in Westerville in the fall of 2007.
Jim retired from his position as Physical Education teacher at the Ohio State School for the Blind (OSSB) at the end of the 2012-13 school year. Along with teaching K-12 and Multiply Disabled Physical Education classes for 31 years, he was, in past years, coach of both Track and Swimming. He was the Co-Athletic Director and is currently the Treasurer of the OSSB Parent Teacher Staff Foundation.
Jim was appointed the Head National coach of the US Association of Blind Athletes (USABA) in May of 2007 where he coordinates the training and competition opportunities of Blind and Visually Impaired swimmers across the United States. He coached a team at the World Youth Sports Games in July of ’07 and more recently in July of ’09.
Jim is a long time board member of the Central Ohio Swimming Association where he assumes the position of COSA’s Developmental League Director. He also serves on various committees for the Ohio Swimming Association.
Jim resides in Delaware, Ohio with his wife Anita of 33 years.  His son Justin, age 27, is now married to wife Christie and a graduate of  Indiana University where he served as the senior captain of the Varsity swim team and The Ohio State University Occupational Therapy program.  His daughter Julie, age 23, is a graduate of the University of Cincinnati and now working as a copywriter for Weber Associates in Grandview, Ohio. 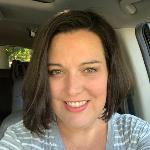 Coach C.J. has been involved in the swimming community for many years, both as an athlete and a coach.  She is a former WAC swimmer from age group through college.  She swam at Westerville North High School where she was a 4 year letter winner and 2 year captain.   C.J. continued her swimming career at the University of Waterloo in Ontario Canada, graduating with a degree in Chemical Engineering in 2003.  She held a variety of engineering jobs since then, including engineer in the pharmaceutical industry and engineering instructor at OSU.

C.J. started coaching with the Swim America program, served as the 8 & under coach at Westerville JC pool, and was the assistant coach for a high school team outside of Chicago (including a state qualifier). She served as the head coach for the Westerville Special Olympics swimming program (2008-2012).

C.J. now lives in Westerville with her husband, Tom, and their children, Piper (3.5) and Blake (1).  In her spare time she is a youth group leader at her church, she enjoys sewing and crafting, and she can often be found enjoying the outdoors with her family.

This is Coach Matt’s fifth year as an age group coach with WAC, and he is so excited to be leading the Gold 1 and Silver 1 groups this season! He began his coaching career over 10 years ago and has been coaching various teams in the Central-Ohio area ever since. Matt is currently the head coach of the Westerville JC Poolcats summer team, and the head coach of the middle school & elementary teams at Oakstone Academy. He is also the site supervisor for the Westerville SwimAmerica Learn-To-Swim program. When he is not on a pool deck, Coach Matt is a behavior and intervention specialist at Oakstone Academy Elementary. Matt has worked with kids of all ages and ability levels in the pool and in the classroom. He has worked for many years with students and swimmers with disabilities, specifically mental health disorders and Autism. Coach Matt is eager to welcome back returning WACsters and meet many new swimmers this season!

This is Emily's fourth season with WAC. She currently teaches 8th and 9th grade math in Westerville. Emily is a graduate from The Ohio State University, where she was also a Scholar Athlete. She has sixteen years of swimming experience and ten years of coaching experience.