Mark serves as the Head Coach and General Manager for the Redding Swim Team. He is a former College All-American Swimmer who has been coaching since 1985. He has coached all levels of swimming in the areas of recreational, high school and U.S.A. swim teams before coming to Redding in September of 1996. In  2005, Mark was also hired as Head Coach of the Men's and Women's Swimming/Diving Team at Shasta College.

Since arriving in 1996, our swimmers have set over 100 new team records and has qualified swimmers for the Age Group Western Zone Meet, Junior Nationals, Senior Nationals, and two(2) Olympic Trails Qualifiers.

In addition, the American Swimming Coaches Association certifies Mark as a level 4 coach. His certification places him in the top 5% in the nation.  Mark is serving on numerous Board of Directors within the swimming and local community.  He has three wonderful children.

Bethany is a former swimmer of the Aqua Ducks. She has been coaching with the Aqua Ducks for 4 years and enjoys teaching and coaching the new athletes. She is the Site Director for our Swim America program and enjoys helping children of all ages explore swimming. A graduate of Chico State in Kinesiology and movement studies, she bring her smiling and caring nature to our team.  Bethany is also the Head Coach at Enterprise High School Swim Team.  She is married to a former swimmer, Chris and has three wonderful children, Clark, Clayton and Evalette.

Aaron Turnipseed is kicking off his coaching career as the Masters Coach and also coaches for the Age Groupers in the evenings. He swam on the Redding Aqua Ducks during his childhood and through much of his high school swimming career. He graduated from Shasta High school and swam at Cabrillo College in Santa Cruz and at Morningside College in Iowa, an NAIA school. Aaron has set a number of meet records in Breast Stroke, Butterfly and 200 IM. Aaron intends to further his coaching career with the Ducks and is currently working toward his Level 2 Coaching certification through USA Swimming and looks forward to obtaining future certifications. Aaron has a rich love and respect for the sport of swimming and is devoted to bringing the best knowledge of coaching to the pool every day. 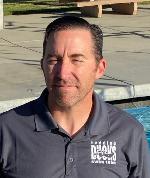 A lifelong swimmer, Rob grew up on the pool deck with a dad as a swim coach.  Some of his lasting memories are summer swim meets, playing in the team area, and camping with the team at meets.  In high school he swam for Shasta High as a standout freestyler and backstroker.   Recruited to swim with Coach Ernie Maglischo at California State University, Bakersfield; he honed his skills to become a competing force in Division II swimming.  During his freshman year, he earned All American Honors and a National Championship ring as a member of Roadrunner team.   The following year Rob took the opportunity to move up into Division I as a Sun Devil at Arizona State University.  There he continued to achieve success competing for ASU on the national team all three years, earning All American Honors, helping his team earn a top ten finish his senior year.  Throughout college Rob coached age group teams in California and Arizona and contributed to the ASU program as a volunteer assistant coach.  Rob completed his degree in Exercise Science from ASU with honors and continued onto his post graduate education with a degree in Chiropractic.  Excited to work with the kids, Rob takes his past swimming experience and his acquired body of knowledge and applies it to his coaching.  Not afraid to try new approaches and always looking for the fun in practice he abides by a simple philosophy in coaching, "Every swimmer has unrealized potential."  He finds his role as a coach is to challenge the swimmer and support their growth as a whole person. 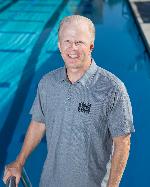 Director of the Shasta High school site High School Program:  Jim Stack – Jim, came to Redding from Orange County, California in 1995 with an impressive coaching resume that consisted of Head Coaching positions at the Club and High School levels.  Jim was recruited to become Head Coach of the Golden State Swim Team which eventually merged with the Redding Swim Team.  Jim's coaching experience covers more than 20 years and he is currently the Head Swim Coach at Shasta High School where he also teaches Biology. 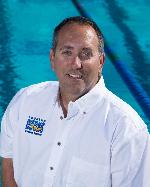 Chip Mark - Coach Chip Mark is a Redding native and grew up on the Year-Round Redding Swim Team (back then it was called the “Shasta Aquatic Club Bears”).  Chip
is married to his wife Alicia and together they have two children, Christopher and Amber.  Chip has been involved with aquatics all of his life.  He worked at the Redding YMCA for nearly 17 years (from 1997-2013) as the Aquatics Director where he taught swimming lessons, coached a Jr. Swim Club for entry level swimmers (many of whom went on to swim for the Ducks), and taught Red Cross Water Safety and Lifeguarding classes.  Chip has also coached at the High School level at Redding Christian, American Christian and currently coaches the Shasta High School’s JV swim team and assists with the Varsity team.  Coach Chip is a familiar face to many around the pools as he has also coached with the Ducks in the past and he is delighted to once again join the Duck family, he shares his love of swimming and children with the community of Redding.