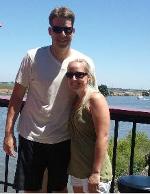 Tres is the Head Swimming Coach of both West Valley Aquatics, and Hunter High School swimming programs.  Coaching Career - He first began coaching with the Hunter Aquatics team, helping the novice group in 1997 and later was an assistant High School Coach at Hunter High School in 2002 and later in the '15-'16 season.  He started as the Head Coach in the '16-'17 season. Swimming Career - Tres started swimming at the old Granger High School pool on the club team for Greg Cope (in the late 80's...).  When Hunter High School was first built, Tres and his family moved to swim for Steve Marsing on Hunter Aquatics Team.  During High School, Tres helped the team win the 1998 5A state Boys swimming team title by winning 2 individual events and helping win 2 relays, in the process setting three 5A state records and earning swimmer of the year honors.  Tres also received an athlete of the year award (all sports) for the state of Utah from the Utah High School activities association, and earned 1st team All-America Honors in all events that he swam.  Tres competed at Junior Nationals twice for Hunter Aquatic Team. After High School Tres was given the opportunity to swim at Texas A&M University in College Station for Jay Holmes for two years, and competed at Big 12 conference championships twice and the US Open once.  After swimming, Tres moved to Washington to work for Microsoft in 2002, and returned to the Salt Lake area in 2015 to raise his family here.  Tres is married to his wife Jamie, and has two sons, Kaden and Caleb.

"Kyle Darling will be joining our coaching staff after graduating from Hunter High School in 2014, and then graduating from the University of Utah in 2018 with a Bachelors of Science in Psychology and a Criminology certificate.

While attending Hunter High, Kyle helped lead the Men's team to a Region championship in 2014 and finished 3rd in both the 200 and 500 freestyle at the 5A State Championships that same year. Kyle broke the school record in the 500 freestyle and ultimately was voted as Hunter High's Male Athlete of the Year for his contributions to the team that year.

After high school he was able to swim for Adams State University for a season before coming back home to Utah and competing for the University of Utah club swim team for two seasons. While at the University of Utah, Kyle competed at the Collegiate Club National swim meet in 2017 and 2018. Now that he is done with school, he is looking forward to helping the next generation of Hunter High School swimmers achieve their goals."