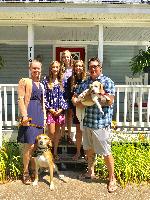 Coach Jeff brings his youthful enthusiasm and over 18 years of coaching experience to the pool deck.  He has coached all levels of swimmers and age groups throughout his career.  He has coached summer league, high school swimming, as well as USS swimming.  His biggest influence was his long time mentor and friend, the late coach Gentry.  He is the father to twin daughters Taylor and Kayla and his step-daughter Emily who will all swim.  He is excited to share his family and love of swimming to the Broad Bay swimming community.

Coach Roby grew up in Naples, Italy and started swimming at the Sporting Club San Giorgio in Italy at the age of 7.  As she became older and more advanced, she started swimming competitively in middle and high school on a year-round team.  She competed at a national level in Italy, with the 100-meter butterfly being her strongest event.  When Coach Roby was 18 she began teaching in aquatics as her main job in Formia, Italy.

She has been a Safety and Swim Instructor for seven years and coaching for the Great Neck Gators winter league for the last 6 years.

Coach Roby’s advice for swimmers is to listen, stay focused, give 100% every-time, and most importantly, have fun.

Nic is a rising 3rd year at UVA and is majoring in kinesiology. He has been a member of the running and swimming clubs at UVA. While he now focuses on long distance running, his passion for swimming continues.
He first started swimming with the Cudas and then went on to swim for Cox high school’s swim team during his junior and senior years. At UVA, he volunteers with a club team and gives lessons when he finds time. He loves watching a swimmer improve and loves seeing the improvements show in meets. He hopes his enthusiasm and passion for exercise will show through his coaching. This will be his fourth year coaching at Broad Bay and he is excited to start his summer off with the Cudas 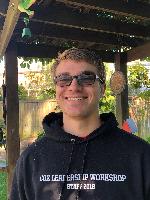 Zach Scheuer will be a rising senior at Cox High School. He has been a junior coach for the team for the last 2 years & he has swum for the Barracudas since he was 4. Zach has also been a swimmer for the Cox HS Varsity team for three years. He qualified for Regionals twice for the 100m butterfly. He enjoys encouraging and promoting the swimmers’ development and confidence throughout the summer season. He loves to see the kids’ progress & is proud that he can make a positive impression on them.

Zach has also worked with children for the last 3 years for his church’s annual Vacation Bible School. He was an age group leader one year and a group leader for the Science curriculum for 2 years. These various positions have helped him learn to inspire and manage a group of children with different levels of motivation & learning styles.