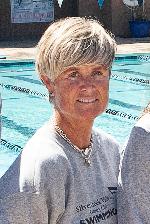 Originally from Boston, Massachusetts, Coach Maureen ("Moe") McCarthy, is a 21-year retired US Navy veteran.  She began swimming at the age of 4 and started to compete at the age of 7.  Coach Moe has over 30 years of coaching experience.  She has also taught swim lessons to babies as young as 4 months through adults up to 75 years old, including children with disabilities.  Coach Moe loves teaching swimming and firmly believes that everyone should know how to swim safely.

Career highlights include being a member of the Chaffey College Swim Team at the age of 32, playing Division 1 NCAA basketball at the University of Maine, and attaining a 4th degree Black Belt in Karate with a World Title in the NBL.  Coach Moe's hobbies include music and watching NFL football. 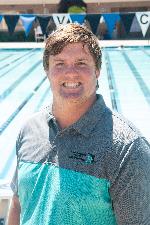 Zachary (“Zach”) Greymont was born and raised here in the South Bay.  He began swimming competitively with the Morgan Hill Swim Club (Makos) and continued to swim with Makos for over a decade.  Zach also swam in college for West Valley Community College in Saratoga from 2013-2015 and later for SUNY Buffalo State in New York from 2015-2017.  .

Zach was a swim instructor for five years where he taught privately, as well as at Saratoga Star Aquatics and Makos.  He later transitioned to coaching and became the assistant novice coach for the Cheektowaga Stingrays from 2016-2017.