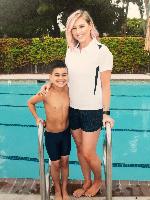 Danielle has always had the love for swimming and all water sports. Growing up in Livermore, she began swimming competitively at the age of six when she joined the Rhonewood Sharks swim team. She also swam year around for SRVLA and continued swimming in high school at Livermore High. Danielle developed a drive and passion for the sport, so it’s no surprise that she swam for the Sharks until she was 18! Danielle has been a swim coach for five years, coaching the Discovery Bay River Otters and became the Assistant Coach for Rhonewood in 2018. She loves teaching kids to swim. Her first job teaching swim lessons was actually at Rhonewood and continued to teach swim lessons at the Livermore Valley Tennis Club as well as the Curtis Aquatic Center in University Place, Washington. She is no stranger to hard work and dedication when it comes to swimming. She loves sharing her passion for the sport and all the stories from when she was on Rhonewood with all the NEW generation of Sharks. We look forward to seeing her (and hearing her) on the pool deck! LET’S GO SHARKS!!!!!!!

Maggie Woods started her swimming career as a Rhonewood Shark back in 1999 -- at the young age of 4! By the age of 10 she had been firmly bitten by the swimming bug and dove head-first into the world of year round swimming—first swimming for Livermore Tsunami, and later settling in with the Pleasanton Seahawks. During that time, Maggie also swam for Livermore High School—swimming at the Varsity level beginning her freshman year and earning MVP honors. (You may still find her name on the record boards at Rhonewood and LHS). Maggie swam with the Pleasanton Seahawks until being recruited to swim at St. Bonaventure University in western New York—a D1 athletic program and part of the Atlantic-10 conference.

Maggie has served as a substitute coach for the Pleasanton Seahawks year round program, and has conducted numerous private swim lessons. During the summer of 2014, Maggie coached for the Ruby Hills Killer Whales.

“I can’t tell you how excited I am to be returning to the Rhonewood Sharks! This is where it all began for me! I look forward to sharing my love for swimming and enjoying the achievements of this spirited and hard-working team! Go Sharks!!” 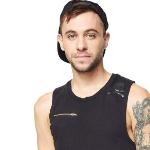 This year we have a new coach: Tanner Bassett! Tanner is not new to Rhonewood or swimming. As a matter of fact he holds Rhonewood Records and League records to this day! Tanner started swimming for Rhonewood at the age of 6! He continued his swimming career by swimming with the Pleasanton Valley Seahawks and Livermore High School so he knows a thing or two about swimming!! Also, he has two nephews that swim on the team; Porter (9-10) and Zander (7-8). So if you see Coach Tanner around be sure to say hi and welcome him back to Rhonewood.