Angie began her coaching career starting the Windsboro Waves swim team in Lee's Summit Missouri in 1998. She coached that team for three years as the Head Coach and grew that team from 2 brothers to over 40 swimmers in that time. She was a swim instructor with Jeff Kelly, Inc. prior to that, which provided small group swim lessons which focused on proper form and offered lessons in homeowners associations and private health clubs through the Kansas City area.
After a short break in the corporate world working in finance and real estate, the pool called her back as she really missed working with children and teens. She got a job working for the Kansas City YMCA in 2009. She then was the assistant coach for Raytown and Raytown South High School Girls team for 2010-2012. And coached for Kansas City Swim Academy (USA Swimming) in 2010-2012.
In 2012, her husband's job moved the family to Northwest Arkansas where she coached the Northwest Arkansas YMCA swim team for 2012-2013 seasons. While in Arkansas she also taught private swim lessons, specializing in helping swim team kids gain advantages in the pool. Also, she also worked as a CASA (Court Appointed Special Advocate) specializing with teens in the foster care system.
She is super excited to get back into coaching here at the Wildwood YMCA. She brings a lot of energy and enthusiasm to the Waves.
Angie is married with 3 kids, 2 boys and 1 girl. She is a swim mom for her Daughter who started swimming at 5 and currently swims for Parkway Swim club and attends Crestview Middle School. Her oldest son is at Marquette High School and enjoys Robotics, computers, and working pt. Her youngest son is at Ellisville Elementary and will be joining the Wildwood Waves for one of his first full swim seasons. Lastly, you need to know about her two dogs Zoey and Penny. They are Australian Shepherd mixes and rescue dogs.Their family is looking forward to setting down deep roots into the area. 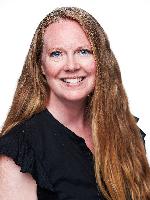 Molly Meyer is an Assistant Coach for the Wildwood Waves Swim Team.  She has worked for the Wildwood YMCA since 2003 and joined the coaching staff of the Wildwood Waves in 2004. Coach Molly swam competitively since 3rd grade for the Rockwood Swim Club.  She continued swimming up through high school where she was on the girls varsity swim team and was captain her senior year for Ursuline Academy.  Molly is married with two young sons, and another addition on the way. Coach Molly is strict on form and technique and pushes the swimmers to know and understand their full potential.