Head Coach Fabio began swimming at a young age in his native He went>
From 1997 through 2003 Coach Fabio was a professional swimmer for the internationally recognized Pinheiros Sports Club in
His teammates included Cesar Cielo, 2008 Olympic Gold Medalist in Coach Fabio transitioned from athlete to coach beginning in a t the Reebok Sports Club in 2000. In 2007 Coach Fabio was invited to coach at the prestigious Pinecrest Swim Camp in He enjoyed his time in the and subsequently took the position of Age Goup Coach for the Myrtle Beach Swim Team from 2007 to 2008. In 2008 Coach Fabio helped found the Coastal Aquatic Club where he is been serving as Head Coach. Coach Fabio is a Coach/Athlete Member of USA Swimming and is ASCA (American Swimming Coaches Association) Level 4 certified. 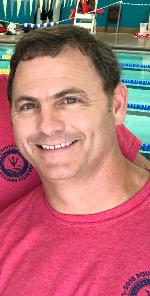 This is Coach Alan’s first year with CAC. He primarily works with the Splash and Novice age-groupers.

He brings over 30 years of swimming and coaching experience to the team.

Coach Alan started swimming in summer league which quickly turned into swimming year-round, then high school and on into college. At the age of sixteen his coach asked for help teaching the youngest swimmers on the team which fostered a true love for the sport and teaching. Since then he has coached at the Arlington Aquatic Club, VMI, Coastal Carolina University Masters, Grand Strand Swim Team, and the Tornado Aquatic Club of Tulsa. He was named Oklahoma Age Group Coach of the Year for the 1997-1998 and 2000-2001 seasons.

Coach Alan, also known as Dr. Alan, holds degrees in Physical Education from Coastal Carolina University, Human Biology and a Doctorate of Chiropractic from Logan College of Chiropractic. He and his wife Dr. Elaine Levy, own and operate Sea One Family Chiropractic here in Myrtle Beach. Their two boys proudly swim for CAC as well.