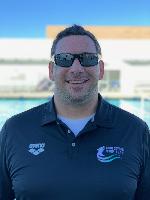 David Prodanovich grew up and swam the majority of his career in Santa Barbara, as a member of the Santa Barbara Swim Club.  From SBSC he went to swim in college at Cal Poly, San Luis Obispo where he studied Kinesiology.  David began his coaching career for his old club team in Santa Barbara in 2002.  From there he returned to San Luis Obispo to coach for the Seahawks and was their Head Coach in 2005.  In 2006, David relocated to Orange County and began to coach for the Fullerton Aquatics Sports Team.  During his eleven years there, David developed numerous top-ten National Age Group qualifiers, All-Star's, and Sectional qualifiers.

David came to the Coto Coyote Swim Team in June of 2017 and has the goal of leading by example and help all Coyote Athletes reach their potential.   When David is not at practice he enjoys spent time at Disneylad and exploring national parks with his wife Katie and dog Wyatt.

I was a swimmer for 15 years. I started at the Fullerton Aquatic Sports Team and swam there for eleven years where I was a distance swimmer. My primary events were the 500, 1000, and mile. I also swam varsity for El Dorado High School for all four years and when I graduated, I went to Cypress College for two years where I hold the 500 and 1650 school records. Then I transferred to Concordia University Irvine and swam there for two years and graduated with my bachelor's degree in behavioral sciences with a minor in psychology and I am currently pursuing my master's degree. I first started teaching swim lessons and pre-competitive coaching in 2014 and continued to do so through 2020.

Coach Kayleen will be working primarily with the Senior Teal and the Coyote 2 White groups.

Esther has been in the water for most of her life as a swimmer.  She then began teaching lessons in 2016 and worked with all ages between 2 and 50 years old.  Esther began coaching competitive swimming in 2018 and additionally she was one of our Cubs Summer Team coaches this past summer. Esther will be working with our Coyote, Coyote 1, and Coyote 2 Teal groups.

Katie has been a swimmer for most of her life, but it transformed into one of her passions when she started high school where she swam all four years at Tesoro.  Katie is a certified lifeguard and has been teaching swim lessons for the past two years.  This past summer she was one of our Cubs Summer Team coaches and found that her passion as a swimmer, is also her passion for coaching.  While note coaching, she is a Freshmen at UC Irvine studying Biomedical Engineering.  Katie will be working with the Coyote, Coyote 1, and Coyote 2 Teal groups. 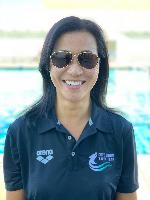 Liang Joe is now in her seventh season with the Coto Coyotes.  This is her second year as a Master's coach.  Prior to that she was the 10 & Under Lead Coach.

She first joined in 2013 as the 10 & under assistant coach when her kids, Ashley and Brandon, were on the team.  As a mom of two kids on the team, she noticed this team not only supports the athletes, but it emphasizes community and relationships.  This family oriented team inspired her to be a coach.  Her favorite part about being a coach is watching a swimmer progress in the sport of swimming and teaching them how to reach their goals.  She believes strength is about consistency, persistence, hard work, and overcoming the things you thought you couldn't achieve.

Liang's swimming experience started when she joined her high school swim team.  She continued to swim post-high school until she found her way on the Coto Master's Team and now participates in Triathlons.

Liang has a Bachelor's degree in Nursing from San Francisco State University.  She is a certified Infant Swimming Resource (ISR) instructor.  Teaching ISR lessons and her passion towards the mission to see that "Not One More Child Drowns," gives her an opportunity to save a child's life and give back to the community.