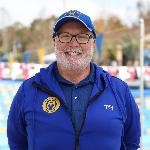 Coach Mark Moore started coaching at the Nadadores Masters in 1996.  His coaching philosophy emphasizes developing team excellence in a positive and confidence building environment. He believes that each person   has an opportunity to use swimming as a life-long activity, while having fun and swimming fast at the same time.  Physical, mental, emotional, and social traits are all aspects of his philosophy.  His  goals include developing team growth, unity and individual excellence.  He has a purpose, a plan, and is persistence and passionate about what swimming can do for  adults who apply themselves to excellence.   He has dedicated a large portion of his life to the expansion and enrichment of Masters swimming.

Mark is constantly finding new and innovative approaches to make his swimmers feel confident and competent in attaining their individual goals, while at the same time embracing a strong team spirit and unity.  He loves what he does, and he enjoys making swimming and the social activities related an enjoyable and fun experience for everybody. 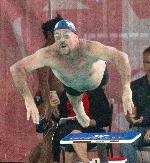 Coach Mike Gibson has been involved in competitive swimming and water polo for over 40 years.  He was a Mission Conference Finalist while swimming for Chaffey College in Alta Loma, CA in the 200 IM, 200 Breaststroke, 500 Free and 200 Fly in 1980.  He played water polo and swam at UC Riverside.  After college Mike competed in many triathlons ranging from Sprint distances to full Ironman races.  Mike joined the Nadadore’s Masters swim team in 2007 and currently holds  records in the 200 Fly, and the 200 Breaststroke.  In August of this year Mike had (3) top 10 finishes at the Summer Longcourse nationals.

Mike received his bachelor’s degree Liberal Studies from UC Riverside in 1983.  After transferring to Cal State San Bernardino he received his teaching credential in 1985 and his Master’s degree in Reading Education in 1988.  Mike has been a teacher for 34 years and currently teaches at Tesoro High School in Las Flores.  He has coached both the boys and girls swim and water polo teams during his tenure at Tesoro high school which began in 2002.   He led the Boys’ teams to their first league championships in both water polo and swimming.

In 2018, Mike joined the Master’s coaching staff and currently coaches the evening practices 3 nights a week.  He  truly feels that it is an honor to be a part of  such a respected program and alongside so many  dedicated swimming professionals.

Coach Nicole is new to Southern California and the Nadadores team.  She moved here from Wisconsin in May of 2018.  She is currently employed full time as a Lifeguard Manager with Premier Aquatics, where she also teaches Lifeguarding, CPR and First Aid, and Water Safety Instructor classes.
Her undergraduate degree is from Bloomsburg University in Pennsylvania in Secondary Education and French and her Master's Degree is from Western Kentucky University in Facility, Sport and Event Management. She was a competitive swimmer in high school until a knee injury prevented her from continuing to swim competitively.  After 10 years away from competitive swimming, she is excited to be back in the pool.
Recently, she has started competing as a triathlete. Nicole has been teaching swim lessons for about 5 years and has experience coaching beginning triathletes, US Navy swimmers, and age group swimmers.  Her favorite thing about coaching is watching swimmers make progress in the efficiency and technique of their strokes.
She is looking forward to being more involved with the Nadadores swim team and competing in Master's Swim Events. 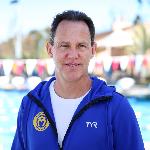 Coach Kyle started swimming competitively at age six and swam 12 years with the Grand Terrace Sharks, the Colton High Yellowjackets, and the Riverside Aquatics Association. He dabbled a bit in water polo in high school and once scored a desperate, no-look, backhanded shot from halfway across the pool. The opposing coach and goalie were not happy. Kyle also worked as a seasonal lifeguard, water safety instructor, and pool manager.

After a 25 year hiatus from competition, Kyle decided to return to the pool to swim with the Nadadores Masters. Since then, he has accumulated one USMS Top Ten individual swim in the 100-meter Freestyle and sixteen USMS Top Ten relay swims (with his exceptional teammates).
Kyle's enjoyment from being a Nadadores Masters swimmer inspired him to become a USMS Level  2 Certified Swim Coach. He is excited for the opportunity to help his teammates achieve their personal fitness goals and looks forward to cheering for them during future swim meets.