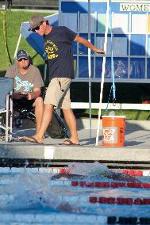 In October of 2012 the Piranha Swim Team hired CEO and Head Coach Jeff Conwell. Jeff comes to the Piranhas after a successful 14 years of coaching the Canyons Aquatic Club in Santa Clarita, California, six and a half years as their Head Age Group Coach and just over seven as the teams Head Coach. During that time Canyons grew from 250 swimmers to 600. He also served as the Head Coach of the College of the Canyons Swimming and Diving team and was an Adjunct Professor at the College from 2006 to 2012.

Prior to joining Canyons Jeff spent two years as an Assistant Coach at Cal State Northridge, an NCAA Division 1 program, was the Head Age Group Coach at CLASS/CCAT Aquatics in Calabasis, and was the Head Coach of Crespi, Louisville, and Granada Hills High Schools.  At Granada Hills his Girls won a CIF Team Championship and set five CIF records.

Jeff has been active in the local and swimming community, formerly serving on the City of Palm Springs Parks and Recreation Commission and currently a member of the Southern California Swimming Board of Review and the Eastern Committee of SCS Board of Directors.  He also has been the Palm Springs High School Head Boys Swimming coach since 2015.   Jeff has been recognized by USA Swimming as a member of the 2009 National Select Camp Staff and selected to attend the 2011 and 2015 Open Water Select Camp.  A native of Sacramento, Conwell competed for California Capitol Aquatics and was coached by 1992 US Olympic Coaching Staff member and Hall of Fame Coach Mike Hastings. He also swam and played water polo for Jesuit High School in Carmichael where his Senior year the Maurader  Swim Team was named the NISCA Prep School National Champions and the Water Polo team was CIF runner ups. Conwell later attended Cal State Northridge as a scholarship athlete where he earned his bachelors degree in Kinesiology and served as team captain of their swim team.