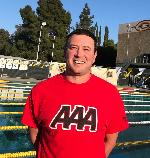 Marius was born in Sibiu, Romania.  He began swimming at the age of 4 at a local club.  At the age of 14, Marius joined the Romanian National Swim Team where he competed in European Championships and  in 1996 and 1997 became the National Champion in the 200 meter butterfly .

In the spring of 2002, Marius was recruited by the University of Louisiana at Monroe and received a full swimming scholarship.  At that time he also qualified for the US Senior Nationals in Minneapolis in the 200 yard butterfly.  During his four years in college, Marius was an NCAA Division 1 qualifier, where he advanced to the Championship Finals at the Conference Meet and broke program records with personal bests in the 100 yard butterfly, 200 yard butterfly and 200 yard freestyle.  In 2003-2004, Marius competed against US Olympians such as Aaron Peirsol, Ian Crocker and Brendan Hansen.  Competing against these great swimmers motivated Marius to qualify for the Olympic Trials in the 200 meter butterfly.  In 2005 Marius was selected and initiated as an elite member of the University of Louisiana Club for Outstanding Achievement in Athletics.

“Achievement and victory is what happens when ten thousand hours of training meet up with one moment of opportunity.” – Author Unknown 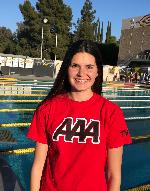 Katrina started taking swimming lessons at the age of three and began swimming competitively for a YMCA swim team when she was four years old. Later on she swam with the BIOLA swim team. She swam on the varsity team for all four years at La Serna high school. During her time in high school, Katrina competed at CIF's three times for 100 backstroke. After high school, she went on to swim at Fullerton College where she competed at the state championships.
Katrina spent two years working as the secretary for the Whittier YMCA swim team. She has also lifeguarded and taught swim lessons. She is currently going to school to become an elementary school teacher. 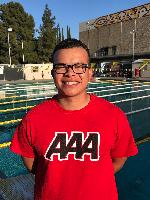 Cesar began swimming when he was 11 years old at the local YMCA in Hacienda Heights. He learned the basic strokes and basic water safety at the Y and swam there till he started High School. Cesar's joined the Nogales High School as a freshman and made it to the Junior Varsity team. As a sophomore Cesar moved up to the Varsity team and continued swimming till he graduated. After graduating Cesar went to Fullerton College and swam there for 2 years. Cesar his freshman year made finals in his 200 back and 200 individual medley. Sophomore year made finals in the 400 individual medley, 200 back, and 200 free. After swimming for 2 years at Fullerton College cesar was recruited by his High School coach to be an assistant coach for the varsity swim team at Nogales in 2016. Cesar in 2016 was recruited by AAA to coach for the Canyon White group. Cesar is passionate to help swimmers grow and become strong competitive swimmers. 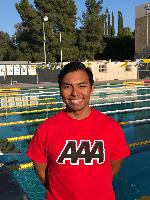