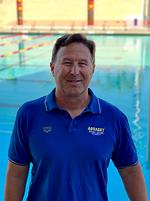 Brian Pajer founded the Aquazot Swim Club in 1999.  In the first year, Brian’s leadership and coaching led the Aquazot team to win the SCS Junior Olympic Championships and placed among the elite teams at the US Nationals. Over the past 19 years, Brian has coached Aquazot swimmers who have represented the USA at the Olympic Games, World Championships, Pan Pacific Championships, & Pan American Games.  Aquazot has been named a USA Swimming 'Gold Medal Club' 5 out of the last 7 years.

Todd Hickman started competitive swimming at the age of 5. He was a well rounded swimmer holding records in Orange County in fly, free, and IM’s. At age 14 he broke the National Record in the 500 free and was first in the nation that year in 9 events. He won CIF in the 200 IM his senior year and was first in the nation in High School. He received a full ride scholarship to the University of Arizona and was an NCAA All American in 1987. After college he competed in his 3rd and final Olympic Trials in 1992 and was 9th in the 200 IM.

Since then, he was the athlete rep for Southern California Swimming for the National Convention; where he held positions in the Club Development Committee, Time Standards Committee, Officials Committee, and Athlete Accountant.

Coach Todd’s everlasting devotion is that his swimmers realize and achieve whatever particular goals they set for themselves; and they find personal success and satisfaction in knowing they made the effort to do the best of which they are capable according to their own level of competency. 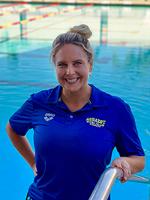 An Aquazot Alumna, Coach Vanessa has been active in the sport of swimming since she was a child starting out as an age group swimmer for Head Coach Brian Pajer.  After graduating from the University of California, Santa Barbara, she returned to the pool and earned an Infant Toddler Instructor Education Program certificate from the United States Swim School Association.  She transitioned back into age group swimming and was recruited to join the Aquazot Coaching staff in 2013.  In 2017 Vanessa joined the JSerra High School coaching staff where she currently leads the freshman/sophomore swim program.

Combining the knowledge she obtained through the certification program, her years as an age group swimmer and high school coach, Vanessa delivers effective instruction and training to children with a wide range of personalities and learning styles.  This is reflected in her ability to help most of her AZOT 2 swimmers achieve Blue, WAG, JAG and JO times.

In her free time Vanessa enjoys swimming, surfing, and spending time with her husband and friends. 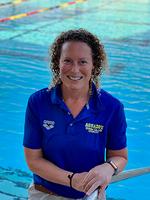