PVST is Co-Sponsored by

A 2004 Olympic Torch Bearer and ASCA level 4 certified coach, Tim Hedrick has been the PVST Head Coach since 2007. Prior to joining PVST, Tim had an 8-year affiliation with Buenaventura, where he served the club in various administrative and coaching capacities, including two seasons as the Senior Development Coach, interim Head Coach, three seasons as a volunteer assistant coach, and served on its Board of Directors as Vice President and Meet Director, instrumental in the club garnering its first award for the SCS June Age Group Invitational.

Vicki has a long swimming history that began with age group swimming, led to collegiate swimming for CSU, Northridge, and continues to this day as a Master’s swimmer with National top finishes in USMS long distance swimming events to her credit.  Mother of 4 CIF-finalist swimmers, Vicki is a credentialed teacher with an M.A. in Education, currently teaching Transitional Kindergarten and has taught Kindergarten, 3rd, 4th, 5th and 6th grades.  She effectively blends her love of swimming and proven teaching techniques for the betterment of PVST swimmers.

Vicki coaches the Bronze group and assists with the senior and developmental groups.

Coach Amy Allen joined PVST as an age group coach in 2015 and is responsible for coaching the Red and Blue groups. She has had her coaching certification for three years and has been a USA official since 2009.

Amy holds undergraduate degrees in history and social sciences and a Masters degree in international business. Having swan as a child, in middle school she focused down to just competing in one sport and played basketball throughout high school. Her husband, Rob, has been swimming his entire life and since starting dating him she has gotten back into the swimming world. Her two sons swim for Coach Tim in the Silver and Gold groups. Her oldest son, Spencer, has been a CIF finalist the past two years (as a freshman and sophomore) and was selected to the Ventura All-County Team this past spring.

Austin Hedrick joined the PVST staff in 2012 and is the team's White group coach and Masters co-coach. A versatile swimmer, Austin was a multiple-time CIF Finalist for Adolfo Camarillo High School in IM and freestyle and was multiple-time Pacific View League champion in both disciplines. Austin is working toward Physics and Chemistry degrees at CSUCI. 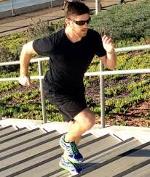