Rick Hancock joined the SBSC family as Head Coach in March 2019. Coach Rick most recently was the Associate Head Coach at Memphis Tiger Swimming in Tennessee where he was primarily responsible for coaching the senior level swimmers, oversaw a staff of eight and helped manage the team for new growth and development. Prior to the Memphis Tigers team, Coach Rick was the Head Age Group Coach of the Memphis Thunder Aquatic Club for almost 6 years. During his time there he helped double the size of the program and developed and coached numerous successful swimmers including: Multiple top 16 National Age Group ranked swimmers, and a number one finisher; SES (Southeastern Swimming) champions, Southern Zone champions, NCSA Juniors and USA Swimming Futures qualifiers. In 2015-16, the 11-12 and 13-14 boys were the SES Team Champions. He helped MTAC also gain three top 200 finishes in the Virtual Club Championship and achieve two Bronze Medal awards with USA Swimming.  He previously was also the founder, head coach and aquatics director of LTP Racing Club in South Carolina.

Coach Rick grew up in South Carolina where his father owned a recreation pool. Being around the pool it was natural that Rick and his older sisters became successful swimmers. Both of his sisters swam in college (Georgia Tech and Duke) and one went on to coach at Auburn.

Coach Rick was a successful collegiate swimmer at the University of Virginia where in his freshman year he helped UVA capture its sixth straight ACC title. He was a two-time ACC team champion, ACC bronze medalist in the 100 breaststroke, two-time Academic All American, six-time MVP Award and four-time Leadership Award winner.

Coach JJ grew up in Hemet, California where he swam for the Hemet Valley Dolphins from the time he was eight years old until leaving for college. He swam in college at U.C. Santa Cruz where he was conference finalist in the 500 free two years in a row. After graduation from U.C. Santa Cruz in 1998 with a B.A. in History, he helped coach the swim team for five years. As the assistant swim coach for U.C. Santa Cruz JJ coached the distance group and the 400 I.M.ers; out of this group, seven All-American swims were produced. While coaching for the University JJ also coached for the USS swim team in the area, Cabrillo Threshers. At Cabrillo the junior group and the pre-senior group were his primary focus. While coaching the college students and the age group swimmers Coach JJ also coached for Santa Cruz Masters. Coach JJ moved to Santa Barbara in 2004 and is the Advanced Age Group Coach at Los Banos as well as the morning Masters coach.

Coach JJ is currently entering his 15th year coaching for Santa Barbara Swim Club. During his tenure he has coached many SBSC swimmers to success. Many of his swimmers have made various Southern California All-Star teams such as, Pacific Coast All-Stars, the North American Challenge Cup (NACC) and Festival. ASCA Level 3. JJ was appointed to coach at the 2007 Western Zone Select Camp. JJ for the past 10 years has coached Western Zones (2005-2006) and  the North American Challenge Cup (NACC) (2007-2014) for Southern California Swimming. All these levels of swimming have taught JJ a lot about coaching the sport and about life in general. Coach JJ enjoys reading and watching movies in his spare time and would like to see how far his coaching can take him.  Coach JJ lives in Santa Barbara with his wife Sarah who is a lecturer in the writing program at U.C. Santa Barbara. 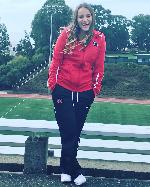 Coach Madison brings a wealth of experience to the SBSC staff. As an alumni of the SBSC family, she has now found her way back in the swimming world upon graduation from college. Below is a script from Coach Madison on her background:

My name is Madison Faulkner and I'm a born and raised Santa Barbaran. I attended Dos Pueblos High School (Go Chargers!). I started my swimmer career with the SBSC family when I was seven years old. After graduation from high school, I went on to Cal State East Bay and Chabot College to continue my swimming career. I majored in criminal justice as well as having my AA in sociology.

During my college tenure, I coached for the Chabot Marlins in the Bay area and absolutely fell in love with the coaching side of the sport. I started as a Junior coach and worked my way to being the Head Coach for two years. I love swimming and I am so happy that I can share my love of swimming from the deck again!