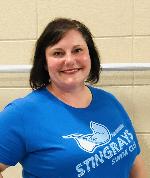 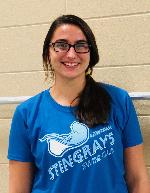 Amanda began swimming competitively when she was 10 years old. She grew up in Miller, SD and swam for their summer swim club for 9 summers. During her senior season Amanda was also an assistant coach and was the recipient of many nominated summer team awards. After graduating from Miller High School she attended Cottey College in Missouri and participated in a student led swim club. Upon graduating from Cottey she attended Northern State University in Aberdeen and swam for the Wolves. During her time at Northern, Amanda served as a team captain for her sophomore and junior seasons. During her senior year she was a volunteer student coach for the Wolves. Amanda returned to Miller for the 6 summers as the Head Coach for MSC while attending college. In her 6 years with the Miller Swim Club, Amanda helped to grow the team to over 50 swimmers and helped to raise  awareness of the sport. In the winter of 2012, Amanda began working and teaching swim lessons at the Aberdeen Ymca, where she still teaches group and private lesson to many swimmers. Amanda began coaching for the Stingrays in the summer of 2017 and has enjoyed coaching all age groups. She has a true passion for the sport of swimming and a love for helping the swimmers develop as athletes and as people.