David has been involved with swimming for more than 20 years. He started his competitive swimming career at the age of 5 for the Kearney Area Swim Team. After that, he swam on the varsity team for Kearney High School for four years. While swimming for KHS he competed at the Nebraska State Meet all four years earning 2 All-Americans and medaling three times his senior year. David then attended The University of South Dakota where he was part of the men's swim team for four years. As part of that team, David made the conference team every year. He graduated from USD with a bachelor's degree in education and a minor in coaching and history.

David began his coaching career when he moved to Clarinda, Iowa, and took over as head coach for the local team. Since 2011, Coach Lind helped the team steadily improve and expand. The team completed its first ever winter swim season in 2012 and made a splash at the state meet with an individual record set and several top three finishers. Since then, the team continued to improve their place at the state meet, moving up to third place overall this past winter. Several swimmers have also been named to the league All-Star team and named Outstanding swimmers of the state meet.  He began coaching with VAST in Fall 2016. 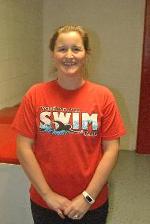 Coach Melanie is entering her 10th season of coaching with the Vermillion Area Swim Team and 14th season in her career.  A Native of Stillwater, Minnesota, Melanie was a competitive swimmer for 12 years at all levels.  She started off swimming at a young age with the Stillwater Swim Club and Stillwater High School.  After graduating high school, she went on to swim four years at the University of Wisconsin-Stevens Point .  A four year letter winner, Melaine excelled in the distance events for the Pointers.  She graduated in 2003 with a Bachelor degree in Elementary Education with minors in coaching and health education from UWSP.

Her coaching stops in her career have taken her to many different levels of swimming.  She has coached with the Stillwater Swim Club (Minn.), Stevens Point Middle School (Wis.), and was the distance coach at the University of Wisconsin – Stevens Point after her swimming career was over.  Prior to being the assistant coach at VAST, Mel was the head coach in Vermillion before stepping down to spend more time with her family.

Melanie is currently a 5th grade teacher in Vermillion.  Melanie and her husband, Jason, reside in Vermillion with their four children.