Head Coach Brad Kale hails from Nashville, Tennessee where he had been the Senior Assistant Coach at the Nashville Aquatic Club.

Coach Kale grew up swimming in the Middle Tennessee area with Jack Hazen at the Middle Tennessee Swim Club and John Morse with the Nashville Aquatic Club. Following high school Coach Kale continued his swimming career at the University of Kentucky. Through his four years of eligibility he qualified for finals at the Southeastern Conference Championships several times and was a Senior National qualifier in multiple events.

Coach Brad enjoys boating, fishing and spending time at the beach with his two wonderful children Sydney and Carson. 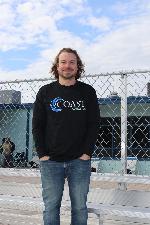 Coach Will Breehl comes to COAST after four years at Darton State College in Albany Georgia.  During that time both men and women’s teams finished in the top 5 at the NJCAA national meet every year.  In 2014 both men and women won the non-scholarship national championship, while the men also claimed runner up in the overall national championship.  In Breehl’s tenure a total of 21 school records were broken, along with 3 region coach of the year honors, 6 region swimmers of the year honors, 81 All Americans, and 1 NJCAA athlete of the year.

Before Darton, Breehl spent two years coaching at Union College in Barbourville Kentucky, while earning his masters degree.  At the NAIA national championship meet, the Union men and women placed 10th and 12th respectively in 2009 and 2010.  Union participated in the Appalachian swimming conference, composed of NCAA division II and III as well as NAIA schools, placing in the top 6 both years.

Coach Breehl was born and raised in Louisville Kentucky, home of the Louisville slugger, Muhammad Ali, and the Kentucky Derby.  He started competitive swimming at age 11 for the Clarksville Seagulls with Vlad Semenov, then with Triton Swimming and Mike Essig, where he also coached during the 2007-08 short course season.  He swam collegiately at the University of Louisville and got his start coaching in summer league at Plainview Swim and Dive team. 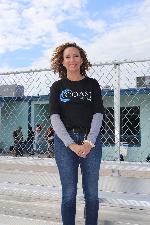 Coach Kathy Ritacco has over 20 years Coaching experience. She coached the SEALS Swim Team in Panama City and coached year round, summer league teams, and high school teams in Maryland and Virginia before joining the Barracudas in 2005. In 2006 Coach Kathy began coaching Ruckel Middle School and in 2008 she began as the Head Coach of Niceville High School. She has coached Cross Country and Track & Field as well. She continues to enjoy running and racing. 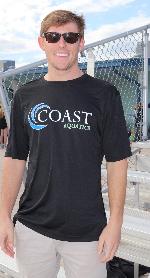 Coach Frank was born in Houston Texas and moved to Mary Esther, FL in 1999.  Frank started his swimming career swimming for what was then the Bluewater Bay Barracudas in 2005 until they merged with Emerald Coast Swimming in 2011 becoming Coast Aquatics.

While attending Darton State College Frank swam under fellow Coast Aquatics Coach Will Breehl and Major Robinson.  He went to the NJCAA Nationals his Freshman and Sophomore years and was part of the National runner up team as well as the Non-Scholarship National Championships in 2014 under Coach Breehl.  Frank has also coached Age Group and Novice at Crimson Tide Aquatics in Tuscaloosa, Alabama in 2015.  Frank became the Assistant Coach for Liza Jackson Preparatory School for their 2015-2016 season and has been coaching for Coast Aquatics ever since.

Frank is currently studying Marketing at the University of West Florida. 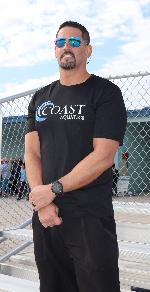 Coach Jasson comes to Coast with an extensive background in swimming. He started competing in Ohio at the age of 12.  He moved to the area when his dad, who was in the Air Force, relocated here. He then continued his swimming locally with the YMCA Piranhas as well as swimming for Choctaw High School.

Coach Jasson was a Senior National Level qualifier and was a former NJCAA Swimmer of the year.  He finished his swimming career at Souther Illinois University, where he received a Bachelor’s degree in Exercise Physiology. He recently started competing again at the Masters level and is ranked in the top 3 nationally in his respective events.

Coach Jasson and his wife Tania have 3 children. A daughter Jazmyn and twin boys Devin and Dominic. All three are Coast swimmers. 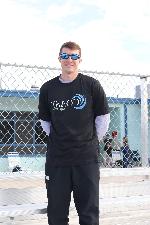 Coach Michael (Mike) Cenedella is from Tallahassee, FL where he grew up swimming on Area Tallahassee Aquatics Club (ATAC) at a young age, from 2004-2013. He swam in their novice program all the way up through their senior program in high school under Coach Terry Maul. In high school swimming he was the team captain at Leon High School and the recipient of the Jim Nettles Award for Leadership on the team.

Upon high school graduation Mike went to FSU and participated in the Air Force ROTC program. For those past four years while at FSU, he has primarily coached the novice and age group programs at ATAC, over 100 swimmers in all. He also coached the high school conditioning and pre senior groups, giving Mike a wide range of experience working with swimmers of all ages and abilities.

He graduated in the spring of 2017 with a BS degree in Political Science and minors in Aerospace Studies and Iberian Studies. Since then Mike has commissioned and been stationed at Eglin AFB as a Contracting Officer with the Air Force Test Wing.

Coach Mike’s passion for swimming and teaching is seen in his everyday life. If he is not by a pool coaching or giving swim lessons, he is by some body of water swimming, fishing, or just enjoying the beach and sun. 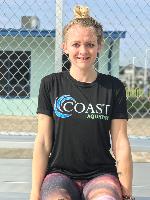 Coach Devon began her competitive swim journey right here in  Bluewater Bay with the bluewater barracudas when she was 9 years old. She swam with them for 6 years before transitioning into swimming for recreational fitness and endurance events such as triathlons. She began teaching lesson and coaching in Colorado at the Tri Lakes YMCA in 2014, and joined coaching staff of Coast Aquatics in August 2017. Working primarily with novice and age group swimmers, Devon loves helping young swimmers develop in their sport and as an athlete in general. She aims to help her kids learn how to swim on a team and go after competitive goals, while also building self-confidence and fostering an enjoyment for swimming which they can carry with them up ladders for the team.

Aside from coaching, Devon is professional massage therapists with the Bluewater Chiropractic Wellness Center, and enjoys helping people of all ages and background increase their personal wellness and live better lives. She loves continued learning, animals, anything outdoors, good music, time well spent with good people,and a good burger. 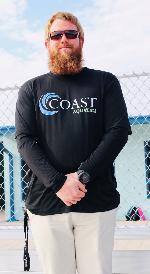 Coach David is our Novice coach at our Destin location.  He come to Coast Aquatics in August 2018.  He is former middle and high school swimmer.  David is a state champion and a 2 time fort walton beach high school captain. His passion is helping out in the community.

Maureen grew up swimming and competing in New Mexico at 7 with her club team Duke City Aquatics. She then went on to swim for the University of New Mexico where she graduated with a degree in Emergency Medicine.

Maureen first started coaching with Duke City Aquatics in 2008-2010 where she helped with the age group kids. She then went on to be one of the head coaches from 2010-2017 for the Highpoint Sharks, a summer swim team in Albuquerque. Maureen started assistant coaching for Eldorado high school in 2013 and then became head coach in 2017. During this time the girls team finished first at the state championship for three years and the boys team finished first for 2 years. Starting in 2015 she also helped coach the club team Albuquerque Triton Aquatic Club which was started by a close friend and went on to be the head coach for a short course season before moving to Florida.
Maureen works hard to make sure her swimmers have a solid foundation in their strokes and techniques. She wants to keep swimming and competing fun so kids continue to swim and enjoy the sport.
Right now Maureen helps with novice and age group kids in Destin and Fort Walton.