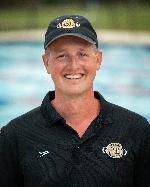 David first coached Georgetown Gold in 2004, back when it was the Aquatics of Georgetown. Currently he is the Masters Coach and works with different groups within the Texas Gold program.

His first swim team, at age 6, was with the Braun Station Seagulls in San Antonio. David's first age group swim team was AAAA. After moving to Georgetown, David swam on the Aquadillos summer league team and was a captain on the Georgetown High School team. At that time, Georgetown lacked an age group team so he swam age group in Temple at TASC and the short lived Georgetown Area Swim team (GAS). At Trinity University he combined his years of competitive gymnastics with water and joined the diving team. He graduated in 2004 with a degree in Computer Science.

David has also coached the diving team at Southwestern University. He also coaches for the Aquadillos summer swim team. In his spare, time he does handstands and reads about computer security, but not at the same time.

Aubrey is the Head Coach/Owner of the Wells Branch location.  Aubrey is entering his 30th season as a coach for Texas Gold Swimming. This will be his 25th year at the helm of the Wells Branch based Texas Gold program. With an emphasis on stroke technique and mechanics, he has developed some of the best Age Group swimmers in the state of Texas, including Micah Lawrence a member of the 2012 United States Olympic team.  He has coached  22 different Texas Gold swimmers to  86 individual Texas State Championships over the last twenty four years. His swimmers have also achieved 16 State records and 2 National records. He has been voted the South Texas Age Group Coach of the Year for 1996, 1998, 1999, 2003, 2008, 2009 and 2010. He was also awarded the American Swim Coaches Association Age Group Coach of the year for 1997, 1999, 2000, 2004, 2009 and 2010. He received the 1999 and 2003 Tex Robertson Age Group Coach of the year award for the state of Texas. He has also been voted the South Texas Senior Coach of the Year for 2005, 2006, 2008 and 2009.